A Nordic Tinge to NATO

The US president, Joe Biden, has promised full support to both Finland and Sweden in their membership applications to what he called a “revived NATO” in the light of the current conflict between Russia and Ukraine.  However, the inclusion is subject to a unanimous vote of all 30 members, including a recalcitrant Turkey.

The Finnish President, Sauli Niinistö, and the Swedish prime minister, Magdalena Andersson, have stated that the major impediment to their countries’ accession to the alliance is the objections of the Recep Tayyip Erdoğan, the Turkish President, who reiterated his determination to veto their membership.  Mr Erdogan describes Nordic nations and especially Sweden as a "hatchery" for terrorist organisations for their support to the rebellious Turkish Kurds and followers of Fethullah Gulen, who is accused by Ankara of the failed 2016 coup.  In 2019, both Finland and Sweden imposed an arms embargo on Ankara after its incursion into Syria.

Earlier Russian President Vladimir Putin said that though the move by Finland and Sweden to join the 30-member military alliance did not threaten Moscow directly, any expansion of military infrastructure would trigger a proportionate response from the Kremlin.

If their bid to join NATO is successful, both Finland and Sweden will end the Scandinavian country's centuries-long military non-alignment.

The North Atlantic Treaty Organisation (NATO) came into existence in 1949 with 12 founding members who were the architects of the allied victory over Nazi Germany and Imperial Japan.  Formed at a time when the Cold War was just warming up, the original objective of NATO was to contain the expansion of the USSR into Western Europe.  However, once the USSR collapsed in 1991, instead of disbanding, NATO went into an expansion spree, taking into its fold many of the former Eastern European allies of the USSR. 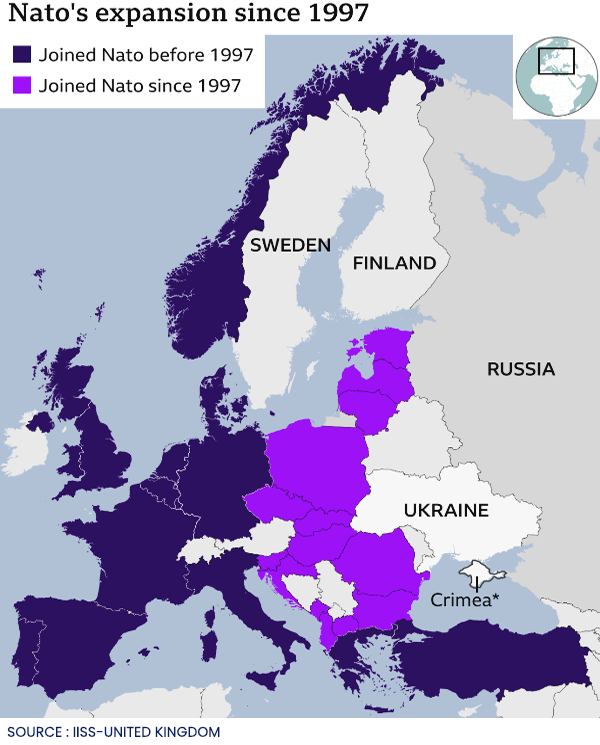 The basic qualification for NATO membership is to be a democracy with a good record of treating its minorities and be willing to commit to resolving conflicts peacefully.  Under Article 5 of the NATO charter, every member must be prepared to go to the assistance of any member under attack, including with armed forces.  Members have committed to spend at least 2 per cent of their GDP on defence.

Both Finland and Sweden join the alliance with highly capable militaries and decades of interoperability joint exercise with NATO.  Their merger into the military alliance will be seamless.  Finland meets all the requirements of NATO membership, including a 2 per cent expenditure on defence.  Sweden has enjoyed over a century of neutrality and the prosperity that goes with it.  It was able to steer clear of the hostilities in both world wars and, in fact, profited immensely.  It has deliberately kept its defence budget low but has shown the willingness to ratchet it up to the requisite 2 per cent of the GDP "as soon as possible".

There is widespread opposition in Turkey against the inclusion of Sweden and Finland into NATO.  A Turkish nationalist party leader warned that such a move could provoke Russia and expand the war in Ukraine.  He urged Turkish lawmakers to keep both countries in "NATO's waiting room."

This is the second time that Turkey has been confronted with a difficult choice.  In the 1980s, it was coerced into accepting Greece's return to NATO after the two bitter rivals had gone to war over Cyprus in 1974.  This time around, Ankara seems determined not to repeat the mistake.  Later Athens and its Cypriot allies turned out to be the key obstacles blocking Turkey’s bid for membership in the EU.  Tensions with Greece continue over its rejection of the UN vote on a unified Cyprus and the competition over the control of resources of the Aegean and Mediterranean seas.

In exchange for a yes vote from Turkey, Ankara has demanded a solution to the pending disputes and a public commitment from the Nordic nations for solidarity with Turkey against the Kurdish groups.

Dr Paul Levin, the founding director of the Stockholm University for Turkish Studies, believes that Turkey's primary concern is the presence of PKK activists in Sweden.  "What Turkey perceives as a threat of PKK is the core national security concern in Turkey.  Sweden doesn't quite share the same perspective on that threat," said Levin.   "So you know it is sort of natural opportunity when Sweden now wants to join NATO, for Turkey to state its position and demand that Sweden sort of takes that into account."

However, Dr Levin also thinks there are domestic considerations for Erdoğan, with an eye toward elections in summer 2023.  "Erdoğan is not doing well in the polls.  He looks to be losing.  This could also be something that lays well to a larger Turkish audience," he added.

While there is indeed a large Kurdish diaspora in Sweden and other Nordic countries, PKK has been classed as a terrorist organisation there, and it is not allowed to operate freely.  So it is not clear how Erdoğan's insistence on a crackdown on "Kurdish militants" in Sweden would actually happen.