Netanyahu under cloud of controversy

The Supreme Court of Israel has ruled that the police could publicize their indictment recommendations against Prime Minister Benjamin Netanyahu. This is in regards..

The Supreme Court of Israel has ruled that the police could publicize their indictment recommendations against Prime Minister Benjamin Netanyahu. This is in regards with two specific cases alleging corruption on the Prime Minister’s part.

The police can now file indictment recommendations with the Attorney General. The tenure of Netanyahu continues to be mired in controversy.

In August 2017, the Israeli police confirmed that Netanyahu was under investigation under suspicion of having committed “fraud, breach of trust and bribes” in two corruption cases. The cases revolve around Netanyahu allegedly taking gifts from wealthy benefactors and attempting to sway media coverage. This is the first time Netanyahu has been publicly designated a suspect. Netanyahu has staunchly denied the charges and has maintained that the investigation was politically motivated.

In addition, former chief caretaker of the official residence, Meni Naftali has also caused controversy. He is leading the movement against Netanyahu and his wife. However, the Prime Minister has said that Naftali had inflated the costs of the household on purpose.

In the midst of the enfolding scandal, reports have also emerged that Netanyahu’s wife will be indicted. The country’s Attorney General is expected to indict Sara Netanyahu for allegedly misusing public funds for personal expenses. She has been accused of diverting over $100,000 of public funds into housekeeping. In January 2018 she said, ““I want to say thank you to the thousands and thousands and thousands of Israeli citizens and people from the all over the world who support me, help me and encourage me.” 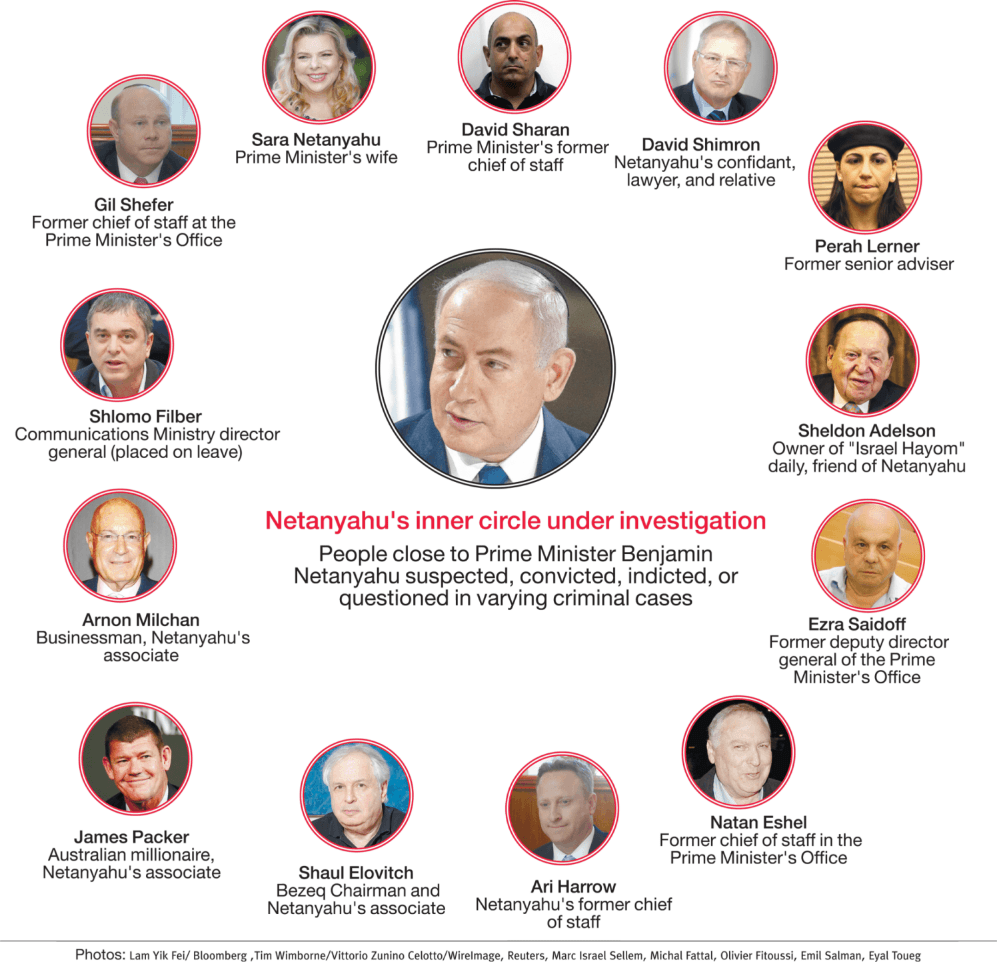 In February, Sara Netanyahu lost a case that was brought against her by former caretaker Naftali. He had alleged that she had mistreated him and abused during his years working at the Prime Minister’s residential mansion. The nation’s court awarded him around $43,735 as compensation.

Here are some of the major cases pending against Netanyahu and his family:

The nation’s Supreme Court has now overruled a petition that sought to prevent police from recommending indictments. This also means that the police could publicize their indictment recommendations against Netanyahu. “There is no reason to interfere,” read the court ruling on an appeal that had been filed by right-wing attorney Yossi Fuchs.

The Prime Minister’s office distanced itself from the petition noting that they were not even aware of the petition in the first place. “We are not familiar with this petition, which was apparently submitted a long time ago. It was of course not done on our behalf, and we were not aware of it,” read a statement directly issued by the office. The statement further read that the office didn’t “attach any importance to the recommendations, the value of which everyone now understands.”

Fuchs has reacted to the petition’s rejection by noting, “If Netanyahu needs to be indicted, the attorney general must make a decision to bring charges against him, but he needs to be able to make that decision without public pressure based on police recommendations.”

Our assessment is that the growing scandals may lead to the ouster of Netanyahu. Even though the Prime Minister himself has become more defiant and embraced a more populist outlook in light of this controversy, this will provide opposition ammunition to mount an effective attack on his government. There are additional concerns – would this affect the credibility of the Prime Minister to address threats emanating from across the border? Would he be tempted to trigger a limited conflict to deflect the growing criticism within the country?