The need for universal healthcare

7th April was World Health Day. This year, which marked the 70th anniversary of the World Health Organisation, governments across the world focussed on Universal..

The private sector is the primary healthcare provider in India, as the country does not have national health insurance schemes or universal health care.  As a result, world health statistics have indicated that India has high out of pocket private healthcare costs, comparable to other developing nations such as Pakistan, Sri Lanka, and Mexico. According to some estimates, the healthcare sector in India will be worth $280 billion by 2020.

The National Rural Health Mission (NRHM), established in 2005, was one attempt to address low public health indicators in the country. It sought to provide “equitable, affordable and quality health care to the rural population, especially the vulnerable groups.” NRHM was merged with the National Urban Health Mission to form the National Health Mission in 2013. These schemes have helped healthcare progress. However, they remain inadequate to address the needs of the country. The Indian government presently spends a little over 1% of its GDP on public healthcare, one of the lowest in the world. The Indian public healthcare system has been criticized for manpower shortages and inadequate supply of critical drugs and blood.

Ayushman Bharat is an ambitious new healthcare programme which aims to provide healthcare for around 500 million poor. It has been called the largest healthcare scheme in the world, and the largest state funded healthcare programme in India. It will cover hospital expenses up to INR 5 lakh a year per family. The government will also establish 1.5 lakh Health and Wellness Centres under the Ayushman Bharat program. However, it has been estimated that it may cost the government much more than projected, and it is unclear how the government fund it. This has led to doubts about whether it will be successful. 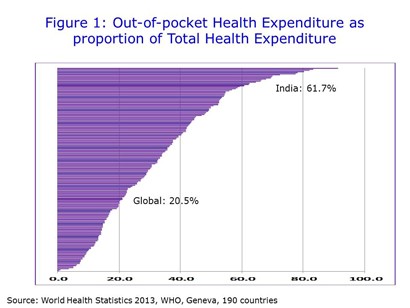 Universal Health Coverage is a health care system where all individuals and communities in a country receive health services without financial risk. The WHO points out that access to health services and financial protection from illness not only enhances life expectance, “it also protects countries from epidemics, reduces poverty and the risk of hunger, creates jobs, drives economic growth and enhances gender equality.”

“Health is a human right. No one should get sick and die just because they are poor, or because they cannot access the health service they need,” Tedros said this week, in light of World Health Day. “Universal health coverage is a political choice. It takes vision, courage and long-term thinking… But the payoff is a safer, fairer and healthier world for everyone.”

There has been some progress in global health coverage in recent years. According to the WHO, coverage of essential services increased by 20% from 2000 to 2015. There has been success in addressing HIV and malaria in particular. However, half the world’s population does not have access to basic health services. According the WHO’s Universal Health Coverage Monitoring Report 2017, “Approximately 800 million people spend more than 10 per cent of their household budget on health care, and almost 100 million people are pushed into extreme poverty each year because of out-of-pocket health expenses.”

Other major global health concerns today, according to the WHO and the World Economic Forum, include the rise of multi-drug resistant infections. Communicable diseases such as Tuberculosis still claim as many as 4,500 lives a day, while non-communicable diseases are also on the rise. The world will also soon have to deal with a rapidly aging population. Over 20% of the population will be aged over 60 by 2050.

Our assessment is that in many low and middle income countries, “catastrophic spending on health” is a pressing issue. We believe that equitable access to healthcare will help address income inequality, and build human capital. Health has strong ties to economic and social development, and it is therefore of national importance. Will India’s latest health programme, “Ayushman Bharat” help improve equitable healthcare in the country or will it fall short?