Ignored by a world obsessed with the highly photogenic war being waged in eastern Europe, a deadly crisis has been brewing in Iraq for the last ten months.

Now with blood being shed in violent clashes at the very heart of the capital, Baghdad, inside the Green Zone, matters seem to have come to a head.

Violent protests erupted after populist leader Muqtada al-Sadr announced his exit from politics on 29 August. In response, the caretaker Prime Minister, Mustafa al-Kadhemi, also threatened to resign if al-Sadr's supporters did not withdraw peacefully from the Government Palace in the Green Zone.

In scenes that were reminiscent of the occupation of the U.S. Capitol last year and the Sri Lankan President’s official mansion early this year, al-Sadr’s supporters breached Baghdad’s ostensibly protected Green Zone and ransacked numerous government structures. Once Iraqi security forces entered the scene, confrontation was inevitable, resulting in 30 deaths and over 700 injuries.

The bloodshed might have stopped (for the time being at least), but Iraq’s political situation remains highly uncertain.

Political instability has permeated Iraq's DNA since its 'liberation' by the U.S. and its allies.

Like the mineral-rich countries in Central Africa, Iraq's vast oil resources, fertile river valleys, and a large manpower base that is deeply divided between the Shias and the Sunnis make it highly vulnerable to external meddling, both regional and extra-regional. When added to the cocktail, homegrown radical groups like ISIS and their rivals, the militant Kurdish groups make for an explosive mix. Since the collapse of the Sunni-dominated Baath party, Iran has been increasingly playing a pivotal role in the Iraqi political scene.

The road to Iraq's ongoing political crisis starts with the parliamentary election conducted last year. Despite winning the largest number of parliamentary seats, al Sadr's bloc (comprising his supporters and a mix of communists and secular groups) failed to form a coalition as per Iraq's consociational democracy in which every social group must share power. Sadr tried to change the constitution to bring in a 'simple majority' rule but failed, and in June this year, he resigned from the government.

This was unacceptable to his fanatic supporters, who threw the Iraqi state into a political limbo through protests, sit-ins and finally, occupation of the government palace. Muqtada al-Sadr lit the fuse in July when he called for a "spontaneous peaceful revolution", accusing the opposition of "rigged elections" and a "deep state." This prompted his supporters to storm and occupy the Green Zone in August.

During the early stages, there were no violent clashes between Sadr supporters and Iraqi forces. The recent escalation has turned volatile with a more pronounced intervention by Sadr's militia group, the Peace Brigades. The Peace Brigades was formed in 2014 as the predecessor to the Mahdi Army that opposed U.S. intervention and Sunni dominance in Iraq and fought deadly street battles with the U.S. Marines in Fallujah. 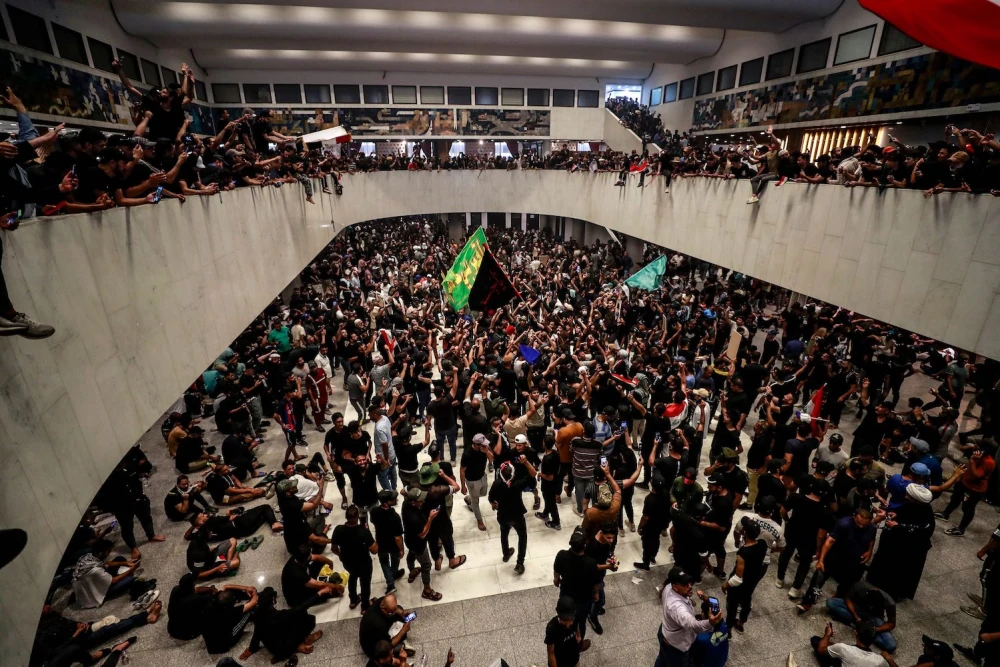 The role of pro-Iranian politicians and militias in preventing Sadr from acquiring power has been another critical reason for widespread condemnation and protests. Since the Iran-Iraq War, Iraqis have been apprehensive of Iranian involvement in their domestic politics. Sadr was considered a staunch supporter of non-interference from the U.S. and Iran in Iraq. With him gone, the fear of external intervention has stirred the Iraqi public.

Sadr plays a pivotal role in forming a new government. Though he has announced his retirement, without Sadr's approval, no political party would be able to create a credible government. Moreover, Sadr's idea of a united Iraq will promote Yazidi and Kurdish parties more than pro-Iranian parties hamstringing Iran’s influence in the country.

Oil production, an essential lifeline to Iraq’s survival, has not yet been affected by the protests. Nonetheless, since Sadr loyalists have already blockaded the roads connecting the Basara oil fields, it might hinder production in the coming days. Any disruption in the oil supply would undermine Iraq’s economy and bring more misery to its citizens. In addition, the massive profits generated by the industry are yet to reach the public. Unless a government is formed, relief measures, resource allocation, economic stimulus packages, and development projects will not be implemented in the country.

Corruption and elitism have plagued Iraq’s governance since 2003. One of Sadr’s main ambitions was to eradicate corruption in the country. With him gone, the public does not have a forerunner that’ll lead them to a free and fair Iraq. The country has suffered consecutive droughts for the past three years, reducing water reserves by 60 per cent and agricultural land by 50 per cent. As a result, food insecurity and inflation have soared.

How the U.S. and Iran will act will also decide the course of this crisis. The U.S. has conveyed its distress in the rise in violence, and Iran has closed its borders with Iraq. Both countries maintain ties with the Iraqi elite to harbour their national interests. The U.S. will not want Iraq to enter a civil war since it would lead to militancy and terrorism. On the other hand, Tehran wants a pro-Iranian government to rule Iraq to strengthen its regional influence.