At least 26 people were killed by a gunman who opened fire during Sunday service at First Baptist Church in Sutherland Springs, Texas. It is a small community east of San Antonio in USA.

At least 26 people were killed by a gunman who opened fire during Sunday service at First Baptist Church in Sutherland Springs, Texas. It is a small community east of San Antonio in USA.

The right to bear arms is a constitutional freedom in America. It is guaranteed under the Second Amendment (Amendment II) to the United States Constitution. It was adopted in 1791. Gun organizations in the country are among the most politically powerful groups. America is home to some of the deadliest mass shootings in history. It has six times as many firearm homicides as Canada, and nearly 16 times as many as Germany. It is home to 4.4% of the global population, however, nearly half of all civilian owned guns are in the US.

Here are five of the deadliest mass shootings in recent history in the US:

Pulse Night Club: Omar Saddiqui Mateen opened fire at a night club in Orlando Florida on June 12th, 2016. It was at the time, the deadliest mass shooting in US’ modern history. It resulted in the deaths of 49 people.

Virginia Tech: Seung-Hui Cho, a student at Virginia Tech University, opened fire in the university and went on a shooting spree. 32 people died due to this attack. Cho later committed suicide by shooting himself.

Sandy Hook: In 2012, Adam Lanza, gunned down children in an elementary school. They were aged between 6 and 7. A total of 27 people died of which 20 of them were children.

Luby's Cafeteria: In 1991, George Hennard killed 23 people in a cafeteria in Texas.

The deadliest ever shooting in modern American history took place on October 2017. A gunman,  64-year-old Stephen Paddock, opened fire on an open-air music festival in Las Vegas. It resulted in the deaths of at least 59 people and caused 527 injuries. The gunman opened fire from the 32nd floor of the Mandalay Bay Resort and Casino. Law enforcement continues to probe the motive behind Paddock’s actions. 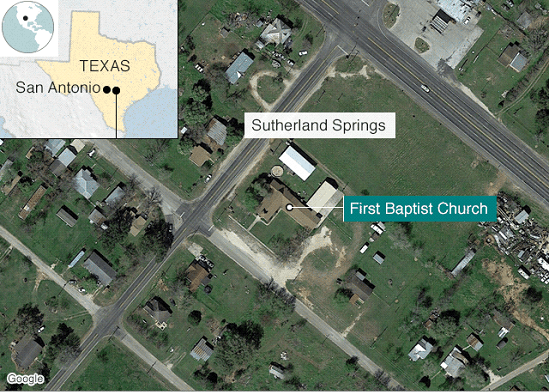 At least 26 people have been killed by a gunman who opened fire during Sunday service at First Baptist Church in Sutherland Springs, Texas. It is a small community east of San Antonio in USA. The gunman has been identified as Devin Patrick Kelley. Previously, Kelly has served in the US Air Force. He began his duty in 2010 and was discharged later due to bad behavior. In 2012, he was court-martialed for assault on his wife and his child. Post which, he was discharged for bad conduct and received a reduction in his rank. The exact date of his discharge is not available but is reportedly around 2014.

A local citizen pulled out his own rifle and began shooting at the suspect as the gunman was leaving. At this point, Kelly dropped his weapon and sped off in his vehicle. The citizen, who has not been identified, then pursued him on road. Kelly drove off the road and crashed his car. He was found dead by the law enforcement.

Texas Gov. Greg Abbott said at a news conference Sunday evening, "We don't know if that number will rise or not, but we know that's too many and this will be a long, suffering mourning for those in pain," he said. "We are dealing with the largest mass shooting in our state's history," he added.

"I never in a million years could of believed Devin could be capable of this kind of thing," Dave Ivey, the shooter's uncle, told NBC News. "I am numb. ... My family will suffer because of his coward actions. ... I am so sorry for the victims in Texas."

Texas Department of Public Safety regional director Freeman Martin said, “We have multiple crime scenes. We have the church, outside the church. We have where the suspect's vehicle was located. We have been following up on the suspect and where he's from. We have Texas Rangers at all the hospitals locating those and interviewing those who were injured.”

US President Donald Trump, who is currently on an official visit to Asia, expressed his condolences to the victims and their families through his Twitter account. Sutherland Springs, which has a population of about 400, lies about 30 miles (50km) south-east of the city of San Antonio.

Our assessment is that there have been increased number of mass shootings taking place in the US. Many have begun raising the need for better gun-control laws to ensure guns don’t end up in the hands of unscrupulous characters. The motive behind the shooting is currently unknown. However, the fact that he was a domestic abuser should provide some clues to authorities.