Multiple protests have erupted all across Tunisia that have resulted in violence and the death of at least one person. The government has arrested over 600 people so far..

Multiple protests have erupted all across Tunisia that have resulted in violence and the death of at least one person. The government has arrested over 600 people so far.

Protestors have registered their anger over the government’s austerity measures and are angry about rising prices as a result of it.

Tunisia is a sovereign state in North Africa, that was once a prominent player in the Mediterranean. Once they realized the region’s strategic importance, the Romans, Arabs, Ottoman Turks and French all vied for control over the country.  The French colonization of Tunisia occurred in 1881. Tunisia gained independence with Habib Bourguiba and declared the Tunisian Republic in 1957.

From December 2010 to January 2011, there was as intensive campaign of civil resistance in the country. This movement, now called as the Tunisian Revolution resulted in a thorough democratization of the country and to free and democratic elections. It led to the ouster of longtime president Zine El Abidine Ben Ali in 2011. Experts state that this was the spark that triggered the Arab spring uprisings.

Tunisia is currently in the process of economic reform and liberalization after decades of heavy state direction and participation in the economy. Prudent economic and fiscal planning have resulted in moderate but sustained growth for over a decade. Tunisia's economic growth historically has depended on oil, phosphates, agri-food products, car parts manufacturing, and tourism. The region is more prosperous than its neighbors, however, there are now growing concerns over the rise in extremism. In 2015, radical Islamic terrorist groups claimed responsibility for multiple attacks that resulted in the deaths of 60 people mostly foreigners. 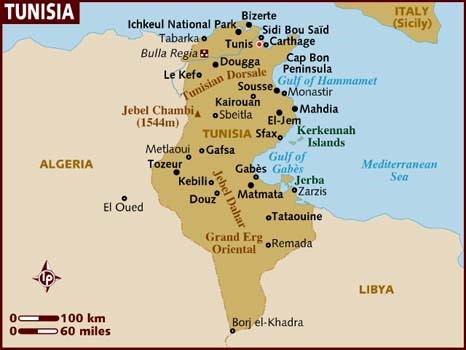 Every year since the revolution, it has now become common for protests to erupt in the region during its anniversary. Similarly, this year as well, on the anniversary of the nation’s revolution, thousands across Tunisia took to the streets to protest against the austerity measures introduced by the government. Violence erupted across various pockets in the country and officials have arrested over 600 people as a result of it. Reports have also noted that at least one person has died as a result of the protests.

“Some 330 people involved in acts of sabotage and robbery were arrested last night,” said the interior ministry spokesman, Khelifa Chibani, bringing the number of detainees since the protests began to about 600.

In the last few days, protests have erupted in 20 different cities and towns in the country. This includes the nation’s capital – Tunis. The government has accused demonstrators of torching police cars and attacking officials.

The government’s new budget has proved to be highly unpopular among the public. Opposition politicians as well as activists have denounced the increases in Value Added Tax that has resulted in rising prices. People are also angry over the introduction of social contributions. Chibani stated that at least 50 police persons have been hurt in the protests.

Heythem Guesmi, of Manich Msamahm (I Will Not Forgive), said the activist group said the new budget “has made the rich richer and the poor poorer. By increasing taxes and the cost of such basic items as flour, telephone bills and internet access, they’ve risked families’ food security. Prices have increased, but incomes have remained at the very lowest level.”

These protests come only days after violence also erupted in Iran as people took to the streets to denounce the government. Iranians also protested economic measures as well as rises in food prices. The protests in Iran resulted in the deaths of at least 22 people.

Our assessment is that economic distress was the underlying cause of the protests in Tunisia as well as in Iran. This indicates that the cause of violence in Iran and Tunisia are not unique to these nations. As we stated earlier, lessons cause be derived from the protests by nations like China and India. The government of India has recently indicated that the nation’s economic growth will slow down in 2018. Should this be a cause of concern?