Senior advisor to the White House Jared Kushner was questioned in November 2017 by special counsel Robert Mueller’s team of investigators about the former national..

After the elections, Flynn was appointed the National Security Advisor for President Donald Trump. He served from January 20th, 2017, to February 13th, 2017. He was forced to after information surfaced that he had lied to Vice President Mike Pence about the nature and content of his communications with the Russian ambassador to the U.S., Sergey Kislyak. On April 27, 2017, the Pentagon inspector general announced an investigation into whether Flynn had accepted money from foreign governments without the required approval.

Jared Kushner, who is the Senior Advisor in the White House and he is also Trump’s son-in-law. He was reportedly one of the main driving forces behind Trump’s decision to fire then FBI director James Comey. He was also present at a meeting with Russian lawyer Veselnitskaya. The person who set up that meeting stated that he had information about Hillary Clinton from Russian players. 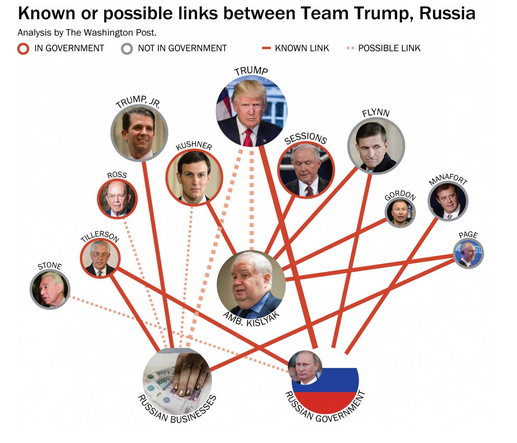 According to media reports, federal investigators have collated enough evidence to bring charges against Michael Flynn and Michael Flynn Jr. This is part of the probe investigating Russia’s interference of the Presidential elections. He is also reportedly under investigation over a plot to kidnap a Turkish dissident cleric living in the US. The plot involved flying Fethullah Gülen to an Island prison in Turkey in return for $15 million.

Reports have since emerged that Jared Kushner had been called in for questioning by the special counsel regarding Flynn. Kushner’s attorney, Abbe Lowell confirmed the news noting, "Mr. Kushner has voluntarily cooperated with all relevant inquiries and will continue to do so.”  The questioning reportedly took about 90 minutes or less and was aimed in part at establishing whether Kushner had any information on Flynn that might be exculpatory.

Flynn is not the first person who might be indicted by the special counsel. Former Chairmen of the Trump presidential campaign, Paul Manafort and his former business associate Rick Gates have been indicted have been indicted on 12 counts, including conspiracy against the United States, conspiracy to launder money, false statements. In addition, a campaign aide, George Papadopoulos was the first person to plead guilty. He confessed to lying to the FBI about his contacts with Russia.

Our assessment is that there are now clear indications that General Flynn and possibly his son may be the next to be indicted. If he is indicted, then he would become the senior most member of the Trump administration to formally face charges. This could also result in his trying to cut a deal with the investigators by cooperating and that would threaten the very foundation of the Trump Presidency.