Koreas gear up for summit

North and South Korea plan to hold high-level talks on Monday to prepare for a third summit between the leaders. Meanwhile, North Korea called on the US to reciprocate their good will measures by easing sanctions and stopping demands that the North denuclearize first. Since January 2018, Pyongyang appeared to have..

North and South Korea plan to hold high-level talks on Monday to prepare for a third summit between their leaders. Meanwhile, North Korea called on the US to reciprocate their goodwill measures by easing sanctions and stopping demands that the North denuclearize first.

Since January 2018, Pyongyang appeared to have softened its stance, initiating diplomatic meetings. On April 27th, North and South Korean leaders Kim Jong-Un and Moon Jae-In held a historic summit, the first in over a decade. The two nations announced that they had agreed to end the 60-year Korean War and signed the Panmunjom Declaration which agreed to denuclearise North Korea. A meeting was also arranged between the North Korean leader and the US President, the first of its kind.

However, North Korea reverted to a more aggressive stance by cancelling a meeting with South Korean officials. National Security Advisor John Bolton said that the United States was looking at a 2004 “Libya model” to denuclearise North Korea. Pyongyang responded that they would “no longer be interested” in dialogue if the US was trying to push for “unilateral nuclear abandonment.” It threatened a "nuclear-to-nuclear showdown". US President Trump cancelled the summit on May 24th, due to Pyongyang’s “tremendous anger and open hostility”. However, the historic Singapore Summit was back on June 12th.

The summit saw the two leaders agreeing to begin a diplomatic process to “work toward complete denuclearization of the Korean Peninsula.” The denuclearization pledge taken had no time frame. Recently, U.S. spy agencies saw signs that North Korea is constructing new missiles at the Sanumdong facility that produced the country’s first intercontinental ballistic missiles capable of reaching the US. Furthermore, a UN report has found that  North Korea has not halted its nuclear missile programme and is trying to sell weapons to the Middle East and Africa. 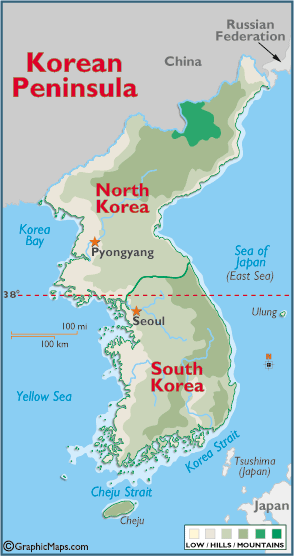 North Korea lashed out at the US for risking stability on the Korean peninsula on Thursday, even as Pyongyang and Seoul push towards a third leadership summit. The uneasy neighbours will hold high-level talks next week to prepare for a meeting between the South's President Moon Jae-in and the North's leader Kim Jong Un.

Although the South's unification ministry did not elaborate on where the summit would take place, Moon had previously agreed to visit Kim in Pyongyang during the autumn, after the two leaders held a historic meeting in April. In a statement, the ministry said the two sides would hold high-level talks on Monday on the northern side of the truce village of Panmunjom to "discuss preparatory matters regarding a South-North summit".

North Korea remains under a range of international and US sanctions over its nuclear programme and missile tests. South Korea’s customs office has reported that three companies have been importing coal and iron from North Korea in breach of UN sanctions. They are also making huge profits as the price of DPRK’s products fell after the introduction of the UN sanctions.

North Korea’s foreign ministry said on Thursday that Pyongyang had stopped nuclear and missile tests, dismantled a nuclear test ground and returned the remains of US soldiers killed in the 1950-53 Korean war. Yet Washington was still insisting on “denuclearisation first” and had “responded to our expectation by inciting international sanctions and pressure”.

The statement on the KCNA state news agency said North Korea, which calls itself the Democratic People’s Republic of Korea, was still willing to implement a broad agreement made at a landmark 12 June summit between Donald Trump and Kim Jong-un. But it accused unidentified high-level US officials of “going against the intention of President Trump” by “making baseless allegations against us and making desperate attempts at intensifying the international sanctions and pressure”.

In the meantime, both Koreas are seeking an end to the Korean War. South Korea’s presidential spokesman said last month that Seoul wants a declaration of the end of the 1950-53 war sooner than later. The rivals will take their reconciliation steps to the Asian Games in Indonesia, where they will jointly march in the opening ceremony and field combined teams in basketball, rowing and canoeing.“Sports have played the role of peacemaker between the Koreas,” said Kim Seong-jo, vice chairman of South Korea’s Olympic committee and the country’s chef de mission at the Asian Games.

Our assessment is that the plans by the Korean leaders to meet comes at a time when the US and North Korea try to follow through on the nuclear disarmament vows. We feel that South Korea cannot go beyond diplomatic gestures to support the lifting of sanctions in North Korea. We believe that in the upcoming leadership summit, the rival Koreas may try to seek a breakthrough amid denuclearization talks that are getting bogged down.