Japan’s economy grew in the three months to December 2017. The country has recorded growth for the eight consecutive quarter. This is the longest expansion the nation has enjoyed since the 1980s. However, the growth has significantly slowed down and the nation has missed its growth targets.

Could this be the beginning of the end of Japanese expansion?

Japan is the third largest economy in the world by nominal GDP after America and China. It has the fourth largest purchasing power parity. It is also considered the world’s second largest developed economy. After the devastation of the World War II, it achieved a steady and significant growth in the second half of 20th century. Much of its expansion was due to its highly successful automotive and consumer electronic industries.

Rob Carnell, chief Asia-Pacific economist at ING told Financial Times that this growth was not due to any flukes. He notes, “This was not one of those flukey one-offs that was caused by a surge in inventories that will be worked down in coming quarters, or one of those random spikes caused by exports and imports growing out of sync.” Recently, Abe re-shuffled his cabinet and noted that economy would be his primary focus.

In the 1980s, after nearly three decades of economic expansion, Japan experienced the “bubble economy.” The period before that was called “Economic Miracle” and the bubble resulted in real estate prices rising to astronomical levels and this was largely due to speculative mania. 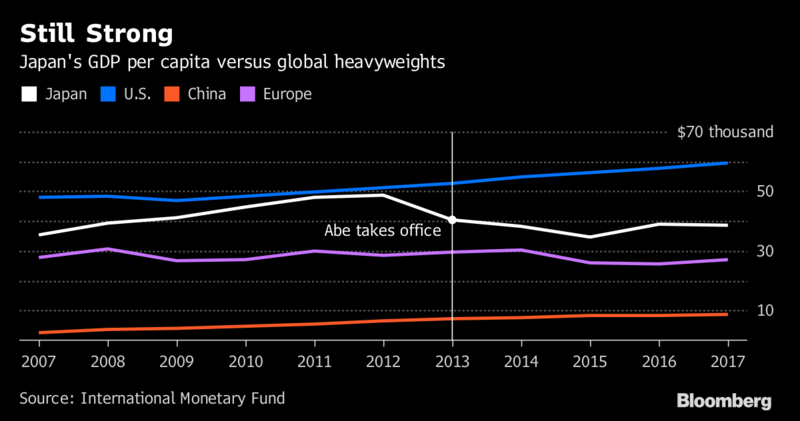 Japan’s economy grew at an annualized pace of 1.4 per cent in the third quarter of 2017. At the time it was the longest run of growth the country had recorded since 2001. It has been reported that Japan has now recorded growth for the eight consecutive quarter. This is the longest expansion the nation has enjoyed since the 1980s. However, the growth has significantly slowed down and the nation has missed its growth targets.

According to Cabinet Office data, the economy expanded by 0.5% at an annualized rate between October and December. This is lesser than estimate for annualized growth of 0.9%. Overall, domestic demand grew 0.1 per cent. However, this is lesser than the 0.5% rise that the region experienced in the previous quarter. Capital expenditure rose by 0.7%.

The long run of growth is also an encouraging sign for the Bank of Japan, hinting that the economy may at last be building up momentum to lift consumer prices toward its 2 per cent inflation target.

“The headline figures are somewhat weaker than expected, but that’s not something to worry too much about,” said Yoshiki Shinke, chief economist at Dai-ichi Life Research Institute. “Capital expenditure and consumption are picking up. Exports are also strong. Other recent data are also strong. It’s safe to say the economy is in pretty good shape.”

"It's hard for the Japanese economy to be self-sustaining when incomes are struggling to rise," said Yasutoshi Nagai, chief economist at Daiwa Securities in Tokyo. "The results were in line with our view.” The good news is that domestic demand is driving growth," Jesper Koll, chief executive officer of Wisdomtree Japan Inc., said on Bloomberg TV. "The pull of imports is actually stronger than expected, and that reduces the net export contribution.”

Our assessment despite sustained growth, there are red flags that the government has to address. Currently, the rate of inflation is flat and employers remain reluctant in raising the base wages. In addition, the nation’s ageing and shrinking population will be a cause of concern as well.