India is in advanced talks with Sri Lanka to operate and manage an airport in the Hambantota area. It is the same region where China has built its seaport to advance its..

India is in advanced talks with Sri Lanka to operate and manage an airport in the Hambantota area.

It is the same region where China has built its seaport to advance its OBOR ambitions.

The relationship shared by India and Sri Lanka is considered to be friendly. The two nations are culturally similar. Buddhism, a predominant religion practiced in Sri Lanka was introduced to the nation in the 4th century BCE by Venerable Mahinda, the son of Indian Emperor Ashoka. However, despite close cultural ties, the bilateral ties between the nations tensed during the Sri Lankan Civil War. It was believed that the state government of Tamil Nadu encouraged the funding and training of Liberation Tigers of Tamil Eelam (LTTE). On May 21, 1991, Indian Prime Minister Rajiv Gandhi was assassinated and the LTTE was alleged to be the perpetrator. In terms of trade, the countries enjoy a robust relationship. They signed a bilateral free trade agreement in 2000 and both nations are members of SAARC. Indian exports account for 14% of Sri Lanka’s global imports. In 2015, in a bid to encourage stronger strategic ties, India and Sri Lanka signed a civil nuclear cooperation agreement.

Bilateral relations between Sri Lanka­ and China are friendly. Historic and cultural ties between the nations date back to centuries. Recent years have found the governments of both countries working to strengthen their ties. Over the years, China has provided economic, military and technical assistance to Sri Lanka. This is largely due of Sri Lanka’s geographical location. The country plays a key role in China’s ambitious vision as dictated by the One Belt One Road project (OBOR). Nearly every South Asian country has signed into OBOR and the project aims at increasing the connectivity and cooperation among Asian countries, Africa, China and Europe. This will provide a significant boost to China’s economy. Due to the friendly nature of their ties, Sri Lanka is one of the few countries that has supported China over the dispute South China Sea territory. 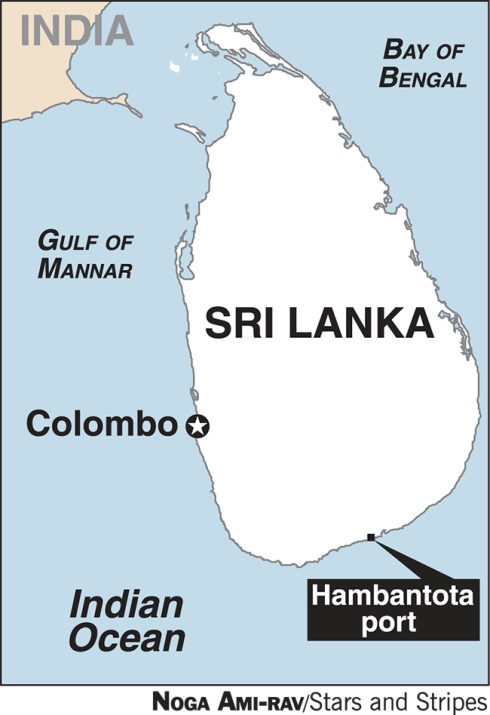 In July 2017, Sri Lanka inked a $1.12 billion trade agreement with a state-run Chinese firm. The Sri Lanka Ports Authority sold a 70% stake in the Hambantota port to China Merchants Ports Holdings. The lease is for a period of 99 years. At the time India voiced its concern that the port will be used by Chinese military. Sri Lanka has vouched that this will not happen.

In October 2017, reports emerged that India was in advanced talks to operate an airport on the southern tip of Sri Lanka. It is in the Hambantota area – the same region where China invested for its OBOR project. Sri Lanka’s civil aviation minister, NimalSiripala confirmed the news. China voiced its plans on building an investment zone and a refinery in the region. The investment zone would be 6,000 hectares (15,000 acres). Siripala said that India came up with the proposal around the same time adding, “It was during this time India came up with a proposal. They were ready for a joint venture with the Airport and Aviation Services Limited.” The Airport and Aviation Services Limited runs the main airport in Colombo and is a state-run company.

According to a report in the Reuters, India would provide 70% of the investment on a 40-year lease period. The first stage of the investment would be approximately $293 million. The Indian government is hoping to take up Mattala airport and turn it into a profitable venture (it incurs losses currently). The airport had been built for $253 million and had been financed by China (the country also provides $230 million of funding). It only receives one flight a day and is considered one of the emptiest airports in the world.

The Chinese government had also placed a bid to operate the airport but the talks did not result in a resolution. The government indicated that it was not aware of the Indian government’s plans. "China hopes the relevant country does more to play a constructive role in increasing mutual trust and cooperation between nations in the region and promoting regional peace, stability and development," the Chinese foreign ministry said in response to an email request for comment.

Indian government has also proposed establishing a flying school and a maintenance hub in order to reverse the airport’s fortunes. A source from the Indian government noted, “We are trying for a large integration of the Sri Lankan and Indian eco-systems, we want to boost tourism in our two countries.”

Sri Lanka has maintained that allowing India to manage the airport would not compromise the country’s national security.

Our assessment is that India is trying to curb China’s influence in Sri Lanka. The two nations are currently playing a virtual game of Chess in Hambantota. Sri Lanka has been bullish in trying to invite investments as it battles with $26.52 billion debt. Neither China nor India will be willing to give up the strategic advantage they will gain from controlling national assets in Hambantota.