India’s Presidency at the UNSC

As part of the Rotational Presidency system of the United Nations Security Council, India has taken over as President of the Council for August 2021. What implications does this have for its key foreign policy objectives?

India was elected to the UNSC in January 2021 for a two-year term as one of the 10 rotating non-permanent members. As part of its new role as president of the UNSC that all 15 members get in the rotation, India will decide the agenda of the UN’s highest decision-making body whose resolutions and directives are binding on all member states. India will also coordinate important meetings on a range of issues during August.

Each non-permanent member gets the opportunity to operate as president of the UN Security Council during the two years it is part of the grouping. The presidency of the UNSC changes hands every month between its members in the English alphabetical order of the member states' names. 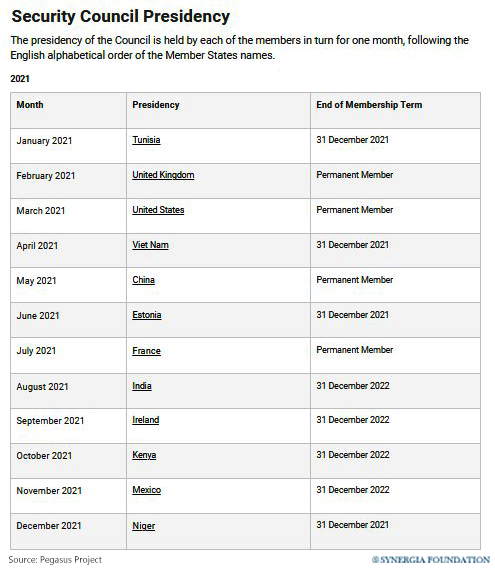 India has been campaigning for a permanent seat at the UNSC along with Germany, Japan and Brazil for many years. In recent years, New Delhi has made the theme of “reformed multilateralism" central to its diplomacy—calling the UN structure that came into existence in the immediate aftermath of World War 2 “anachronistic" and in need of urgent change.

While the US, France, Britain and Russia are not averse to India joining the UNSC as a permanent member, China has been opposed to it.

India will focus on three major areas—maritime security, peacekeeping and counter-terrorism, as it assumed the presidency of the United Nations Security Council for the month of August. Apart from meeting on critical security issues, India will also be organizing an event in memory of peacekeepers.

Meanwhile, External Affairs Minister Dr S Jaishankar is in New York and will be chairing two important debates, one on technology and peacekeeping and another will be a discussion on Secretary General’s 13th strategic-level report on ISIS.

U.S. Secretary of State Antony Blinken was in India on his first trip as secretary of state. During the two-day visit, Blinken had meetings with Indian External Affairs Minister Dr. S. Jaishankar, National Security Advisor Ajit Doval, and Prime Minister Narendra Modi. Despite concerns on the Indian side, at least among the strategic community, about possible irritants in the India-U.S. bilateral relationship on issues such as human rights, curtailment of religious and media freedoms, and the overall tone of Indian democracy, the visit was amicable.

Prior to the visit, there were apprehensions on the Indian side because of the U.S. focus on democracy, and the apparent weakening of India’s liberal values. The U.S. has placed democracy and ideology as an important asset in the conflict with China.