The common perception is that secessionist movements are the preserves of poor underdeveloped countries of Asia and Africa, where authoritarian states are common and ethnic divisions rife. However, even the developed world is not a stranger to this phenomenon of human aspirations, and perhaps the most well known of all is Spain. Both the perceived nationhood of Spain, and the distinctions between different parts of its territory are said to derive from historical, geographical, linguistic, economic, political, ethnic and social factors. Thus, Spain presents an interesting model of study for all those who are suffering similar fissures in their nationhood.

After the ravages of a pandemic that raged through Spain killing thousands, a political event has created an equal disruption in its body politic.

In the regional elections, Catalonia, an autonomous community in the north-eastern corner of Spain (designated as a nationality by its Statute of Autonomy), witnessed a renewed push for independence. The new coalition comprising of the left, nationalists and non-nationalists won 80 of the 135 seats. The first-time majority of pro-independence parties, along with the entry of the far-right pro-unionist party Vox, is of concern for the unity of Spain.

A pro-independence coalition is possible now between the Esquerra Republicana Party (33 seats), Together for Catalonia (32 seats) and the Socialists Party of Catalonia (33 seats). Mr. Salvador Illa of the Socialist Party of Catalone has been chosen as an unofficial leader, and he stated that he would open up negotiations with all parties, except for the far-right Vox. Mr. Illa’s chances of becoming the first non-separatist leader of Catalonia since 2010, definitely rests on the support he receives from other parties. 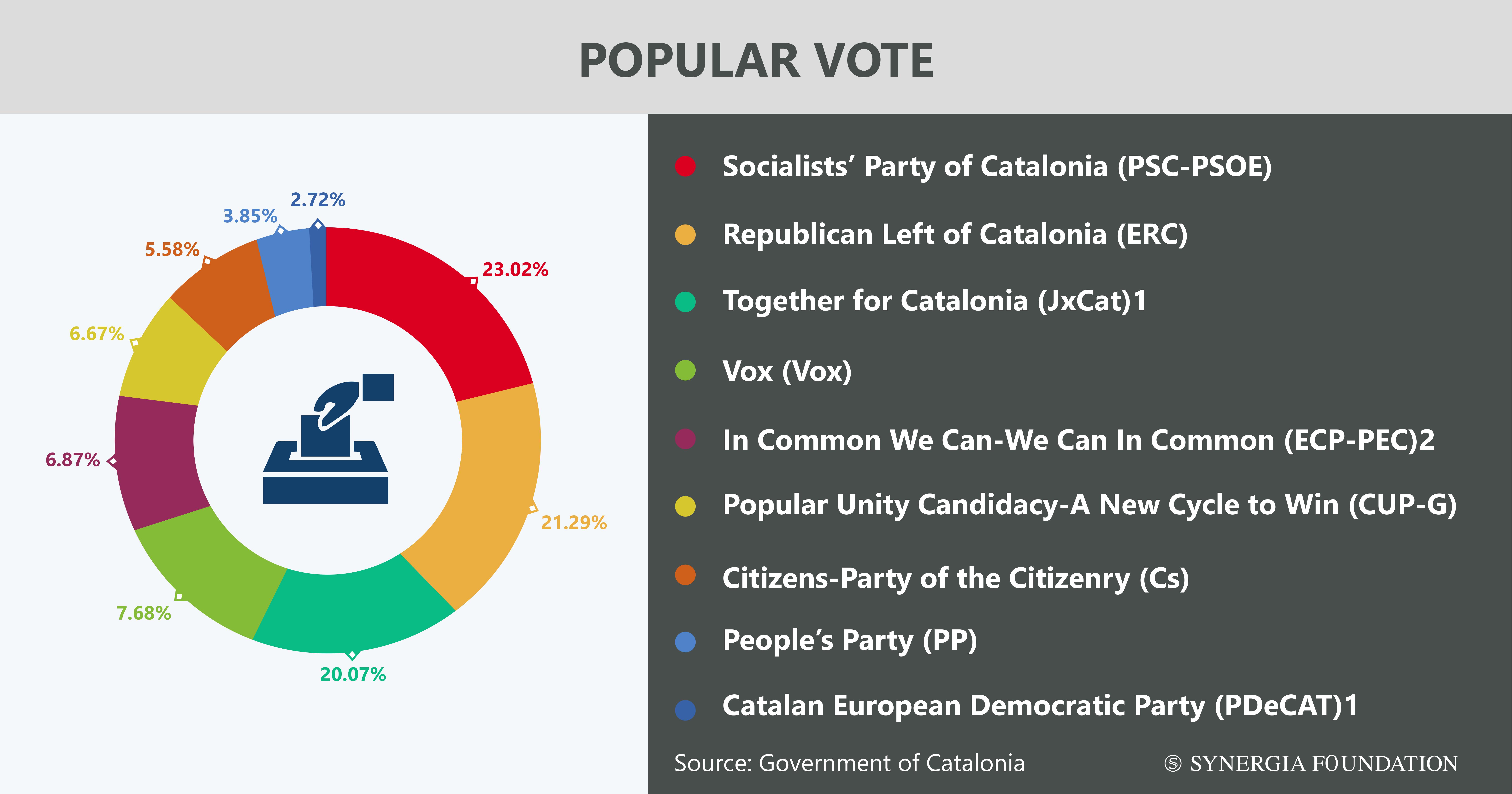 The present-day Spain was created through a movement called ‘Reconquista’- an expansion of the Christian states which ended in 1492. Catholic monarchs, at the point of the sword, welded together a religious and linguistic unification and political centralisation, which lasted well into the 20th century. But, like all pacification pogroms, this too left many an island of resistance resulting in peripheral nationalism in Galicia, Basque Country and Catalonia, which continues to simmer even today.

Catalan politics are often called a ‘cultural war’. The 2017 UDI was based on an 'illegal' plebiscite; not surprisingly, Madrid used a heavy police hand to suppress it, imposed the direct central rule, and a fresh, more plaint government was elected through snap elections. Under the draconian Article 1545, pro-independence politicians were imprisoned. The Madrid government was revoking the lessons it had learnt at its cost while confronting the Basque Country uprising in the last part of the 20th century. Over 243 Basque ETA cadres remain incarcerated even after the armed struggle was finally crushed in 2011.

However, the ETA did not fight in vain as today, the Basque Country enjoys the highest level of self-governance of any sub-national entity in Europe, even managing its own economy. It does not share its tax revenue with Madrid. 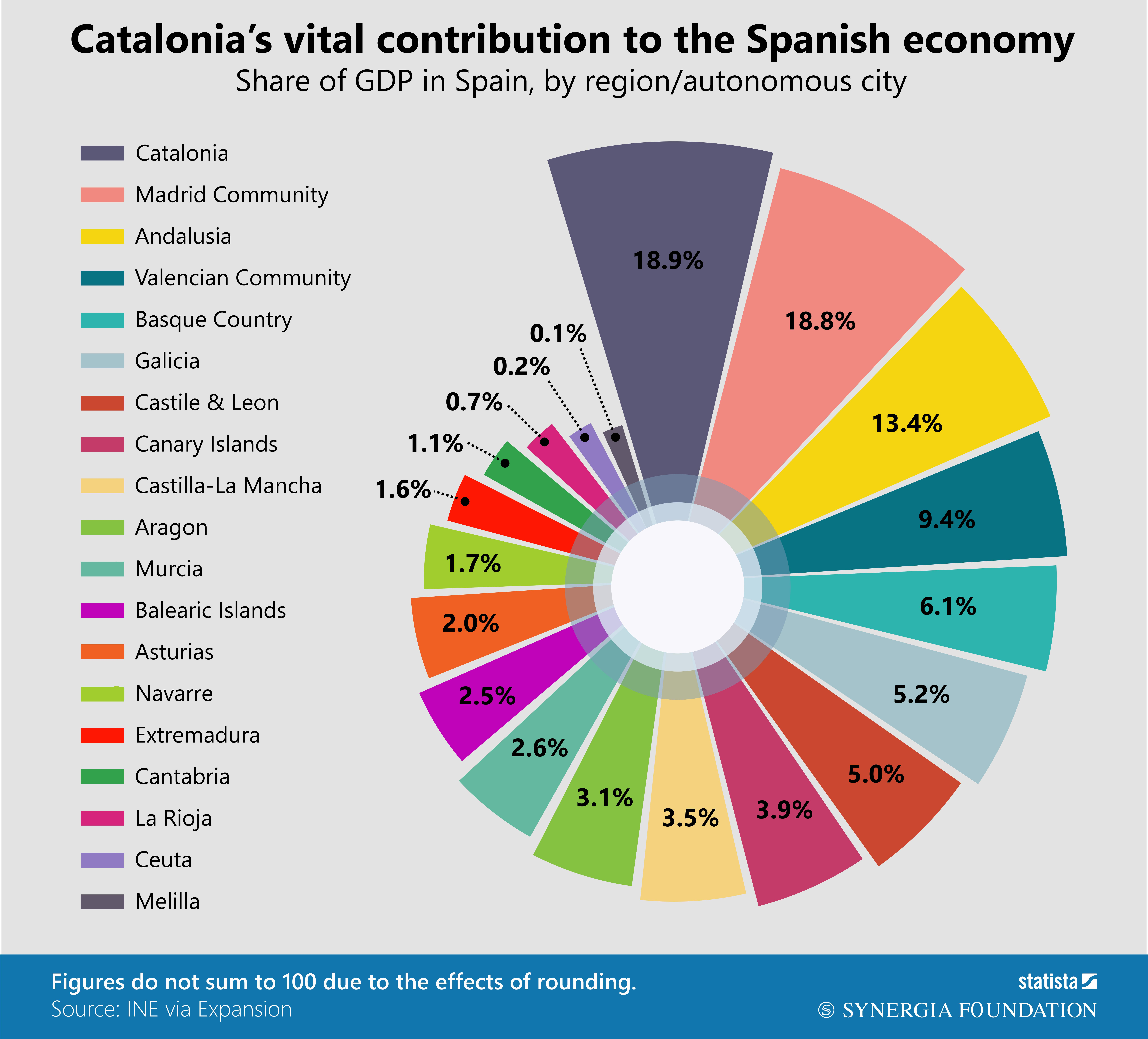 The Socialist-led government at the Centre, led by Prime Minister Pedro, remains well-entrenched, having successfully passed the recent first full-year fiscal programme since 2016. This is being taken as a sure sign of greater political stability, after years of political division due to recurring budget gridlocks. This is critical for a country with a debt-to-GDP ratio of about 120 per cent of GDP in 2021.

CATALONIA AND THE EU

EU too is beset with separatists’ movements, some simmering under the surface while others more in the public eye like Scotland and Catalonia. Both were historically independent nations, the difference being that Scotland was recognised as a country within a voluntary UK Union, despite recent calls to separate. There exists the acknowledgement by the centralised UK that, Scotland has the right to choose whether to remain in the Union or not, via the independence referendum votes. The Spanish government, on the other hand, has not conceded to Catalonia a similar choice.

EU is ill-equipped, both legally and politically, to interfere in separatist tendencies disrupting the fabric of peace in its constituent states. It cannot dictate how member states need to organise themselves or interfere with key state functions such as “territorial integrity”. Any signs of support to Catalonia could inflame other separatist forces across the continent, such as the Flemish in Belgium, the Corsicans in France or the Lombards in Italy. The last agreement the EU brokered was between Serbia and Kosovo in 2013 to normalise relations. The Balkans welcomed EU assistance, yet Spain regards the dispute as a domestic matter.

India was carefully watching during the 2017 Catalonia crisis, where an attempt at secession was put down by central authorities, with no interference by the EU or the international community. Obviously, the world at large preferred to keep inviolate the integrity of the Spanish Nation over the desire for self-determination of its constituent region. With many ongoing separatist movements within its own boundaries, Spain is an interesting case study for Indian political observers.