A Graveyard of Automobile Empires?

On September 9, 2021, Ford announced that it would cease vehicle manufacturing in India in a bid to stem its losses. As part of a restructuring exercise, it will now shift to a high-end, niche market presence in the country, selling only premium luxury cars like the Mustang and Mach-E line-up. In doing so, the company joins other automobile brands like General Motors (GM), United Motors (UM), Harley Davidson and Fiat, which have exited the Indian market in recent years.

Seeking to tap one of the fastest-growing vehicle markets in the world, Ford entered India in 1995. It established a 50:50 joint venture (JV) partnership with Mahindra and Mahindra Ltd, commencing manufacturing operations in Chennai a year later. Although several other locations had been surveyed for establishing the first plant in India, the Tamil Nadu government managed to attract the company with its tax incentives. Moreover, the industrialist Suresh Krishna - chairman of the TVS group, is believed to have played a major role in convincing Ford and Mahindra to set up shop in Chennai.

Over the following years, Ford increased its stake in the Indian plant, eventually terminating the partnership with Mahindra in 1998. Less than two decades later, it proceeded to establish a second plant in Sanand, Gujarat, for both vehicle and engine manufacturing. The automaker, however, struggled to boost its low market share in the price-sensitive country.

In 2017, Ford restarted negotiations with the Mahindra group, exploring a strategic alliance that would leverage the former’s global reach and the latter’s successful operating model. This was bolstered further in 2019 with an agreement to collaborate on product development for India and other emerging markets. At the end of 2020, however, this partnership was called off, citing the devastating impact of the COVID-19 pandemic on prevalent business conditions. This proved to be the last straw for Ford India, which was already struggling to survive in a highly competitive market, eventually prompting the company to quit the country. 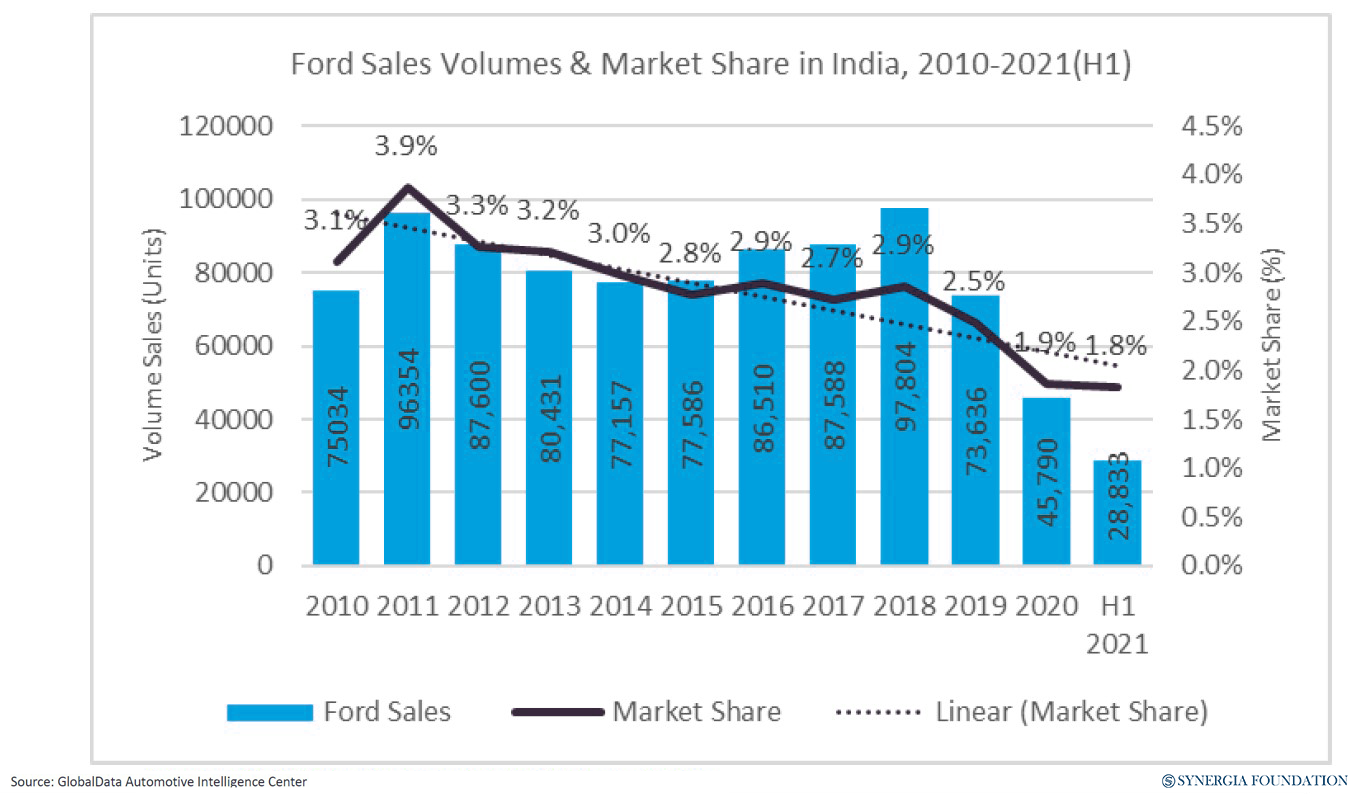 As part of its exit plans, Ford has ceased the manufacturing of vehicles for sale in India. Going forward, it will shut down three of its factories completely and stop selling vehicles such as EcoSport, Figo and Aspire. By the end of 2021, the company expects to terminate the manufacturing of vehicles for export from its Sanand vehicle assembly plant. It will, however, continue the operations of the engine plant in this location. As far as the Chennai factory is concerned, both the engine and vehicle assembly plants will be closed down by mid-2022.

According to reports, Ford will now concentrate its efforts on growing the ‘Ford Business Solutions’ team in India, with a specific focus on engineering, technology, and business operations centres of excellence. Moreover, it has indicated that a smaller network of suppliers will be maintained to support engine manufacturing for exports.

With the much-publicised departure of Ford, the Indian market has acquired a reputation for sobering automobile giants. Only recently, the American behemoth GM had withdrawn the Chevrolet brand in India, unable to grab a sizeable market share in the country. Similarly, Harley Davidson - the US-based premium motorcycle manufacturer had ceased its Indian operations in September 2020, lacking the capacity to compete with the price competitive models of rival brands.

As pointed out by experts, in all these cases, the foreign manufacturers appear to have overestimated the demand for high-end automobiles in the country. At the end of the day, India is a market for low-priced cars, a fact well recognised by Maruti and Hyundai. Currently commanding almost two-thirds of the sales in the country, both these automobile majors had managed to capture the entry-level market with their competitive price models of Alto and Santro, respectively.

In contrast, Ford and GM were late to enter the entry-level market. Even other companies like Skoda, Renault, Toyota and Nissan focussed on putting out expensive models. By catering to such a minuscule market, these popular brands had limited successes in India.

In the specific case of Ford, its inability to read the Indian market and customise the products accordingly was accompanied by other strategic mistakes. For instance, the company chose to expand its facilities into Gujarat at a time when it was not even using its full capacity at the Chennai plant. Meanwhile, the market share growth of the company was negligible, increasing only by 1.7 per cent from FY2000 to FY2019.

Any hopes to revive its prospects through a JV partnership with Mahindra was shattered in 2021, when the alliance was abruptly called off, leaving Ford without a backup plan. As a result, the company has now pulled the plug on its Indian operations, threatening to impact more than 4,200 direct employees of Ford as well as its ancillary units.

Although Ford's exit can be attributed to its own strategic mistakes, the Indian government cannot afford to be complacent. The fact that big brands like GM and Ford are not able to survive in the country can send out the wrong signal to prospective investors. It may fuel the perception that the government has not provided appropriate tax breaks for these companies. In fact, the 28 per cent GST on modes of transportation has been a sticking point for quite some time.

Companies like Toyota Motors and Volkswagen are also struggling to expand their market share in the country. When compared to the economies of scale provided by the Chinese market, this loss of momentum among India’s consumers is particularly concerning. Moreover, the lack of free trade agreements with important markets like Europe may hinder the export ambitions of the Indian automotive industry.