Dr. Hon Min Yau is a Professor at the National Defence University in Taiwan. This article is based on his views at the 104th virtual forum on ‘Semiconductors and Supply Chains in Asia’, jointly organised by the Synergia Foundation and the Taiwan Centre for Security Studies.

Amidst the rising tempo of the U.S.-China tech competition, Washington has banned the export of semiconductors manufactured under its propriety rights to China. This has resulted in a disruption in the industry, with worldwide attention being focussed on the evolving situation. After all, microchips and integrated circuits find applications in almost every aspect of human activity, ranging from cars and refrigerators to solar panels and toys.

Although most semiconductor technology originates in the U.S., Taiwan is a dominant player in chip fabrication. It also hosts more than 60 per cent of fabless manufacturing facilities.

The creation of microchips is not an easy endeavour, as it is capital heavy and technology-intensive. Semiconductor manufacturing is also contingent on a whole range of supporting activities. Apart from actual fabrication, the process relies on silicon materials, packaging, testing, supporting equipment and gas requirements through the entire supply chain.

Over the years, semiconductor companies have also used nanotechnology to place more complicated electronic circuits in a given space. In fact, Taiwanese firms have recently developed 3nm technology nodes that can be deployed in high-end smart devices with powerful computational abilities. This is increasingly sought after by companies like Intel and Apple. 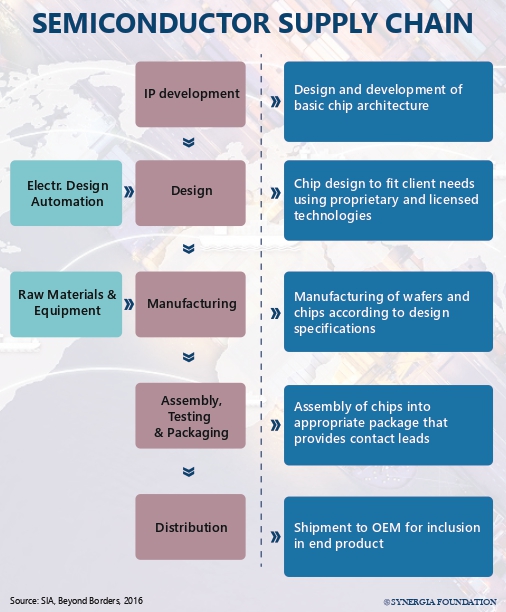 The growing competition in the semiconductor supply chain cannot be divested from its geopolitical context. Most of it is driven by a strategic powerplay between countries like the U.S. and China. Only recently, the Chinese Communist Party had passed its 14th Five-Year Plan, whereby it pledged to “adhere to the core position of innovation in China's overall modernisation, have Science and Technology (S&T) self-reliance and self-improvement act as strategic support for national development, and be oriented toward the world's cutting edge in S&T ”. Beijing has also passed laws to resist U.S. sanctions in the semiconductor sector.

Meanwhile, the Biden administration in the U.S. is unlikely to change the legacy of former President Donald Trump. It has not only persisted with sanctions on Chinese companies like Huawei but also enacted laws such as the U.S. Innovation and Competition Act to build a more resilient supply chain. This will be part of the larger 'Build Back Better World' initiative by G7 countries, which seeks to counter the strategic influence of Beijing.

Secondly, supporting industries like fabrication, testing, packaging etc., are mostly concentrated in the East Asian region. This status quo is unlikely to change over the next few years, as chip manufacturing and allied activities require highly specialised companies. Only a handful of firms can make high-quality and extremely compact microcomputer chips. Even if other countries substantially increase their investments in this area, it will take a long time for their technical expertise to evolve, along with the entire ecosystem.

Given this reality, it is important to protect the East Asian region from security and geopolitical risks that trigger supply chain bottlenecks. As can be recalled, in 1996, Chinese missile drills in the Taiwanese Straits had triggered a panic, leading to a substantial rise in the price of computer components. To prevent similar incidents, the international community needs to pay more attention to regional stability in East Asia.