A 6.0 magnitude earthquake hit Japan Trench, on the coast of Fukushima in Japan on Friday. Fridays tremor struck at about 4 am EDT near the Japan Trench , about 200 miles..

A 6.0 magnitude earthquake hit Japan Trench, on the coast of Fukushima in Japan on Friday.

Fridays tremor struck  at about 4 am EDT near the Japan Trench , about 200 miles away from the Fukushima nuclear disaster site.

The Fukushima Daiichi Nuclear Power Plant used to be a nuclear power plant that has been disabled. Construction began in 1967 and it was commissioned in 1971. It consisted of six boiling water reactors. It is located on a 3.5-square-kilometre in the towns of Ōkuma and Futaba in the Fukushima Prefecture, Japan.

In 2011, Japan was hit by one of the most powerful earthquakes in history . After that 9.0 magnitude quake, all 11 of the nearby reactors shut off, but the resultant tsunami waves knocked out backup power and prevented three of the oldest units—located at the Fukushima Daiichi nuclear power plant—from being able to cool off.

Pressure built up, and workers were forced to let out gases, triggering explosions, according to BBC News. The reactors' cores melted down, more than 160,000 people were evacuated, and the Fukushima crisis ultimately became the second-worst nuclear accident in history.

Despite Prime Minister Shinzo Abe's September statement that the plant is now "under control," the disaster is still not over. Authorities had to pump tons of water into the plant to try to lower temperatures, and they now face the challenge of dealing with the contaminated water. This week, more than six years since the disaster, scientists found radioactive cesium in sand and water as far as 60 miles away.

"Over 9 million cubic meters of nuclear waste are scattered over at least 113,000 locations across Fukushima prefecture," Kendra Ulrich of Greenpeace Japan said in a 2016 news release. "The Abe government is perpetuating a myth that five years after the start of the nuclear accident the situation is returning to normal. The evidence exposes this as political rhetoric, not scientific fact."

Earthquakes like Friday's not only scare residents who fear another tsunami but also affect Fukushima cleanup efforts, which are projected to last for the next four decades, according to The Guardian.

Earthquakes are not rare in the region, given Japan's location on the seismically active Pacific Ring of Fire. The nation experiences about 100,000 tremors every year; roughly 1,500 are strong enough to be detected by  residents without the need for machinery 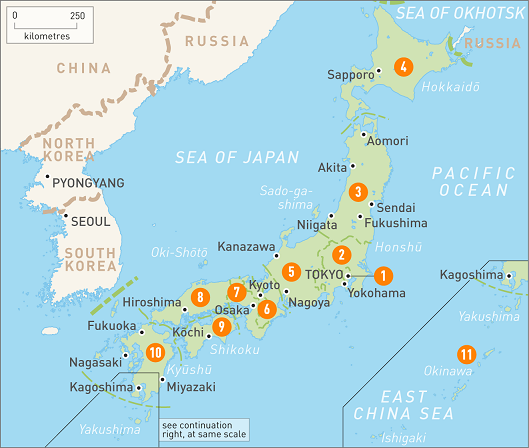 Japan is frequently hit by earthquakes. It sits on four plates - the Pacific plate and the Philippine plate to the east; and to the west, the North America plate and the Eurasian plate.

In September 2017, the coast of Fukushima in Japan was hit by another earthquake. This was a 6.0 magnitude earthquake. The quake hit at a relatively shallow depth of 10 kilometres at 04:59 pm (1329 IST), 255 kilometres east of Ishinomaki. The quake’s epicenter was recorded out at sea and is located parallel to the Fukushima prefecture.

The Pacific Tsunami Warning Center currently says there are no tsunami advisories or watches in place. There have been no immediate reports of casualties or damage, Reuters reports.

There were no casualties or significant damages caused by the earthquake. As it did not pose a threat of a tsunami, the nuclear plant will also not be affected by the development.

The operator of the Fukushima plant is still working on cleaning up and dismantling the reactors. This process is expected to take at least four decades. Recently, Fukushima’s operator, Tepco, has been given the initial approval to start two reactors at Kashiwazaki-Kariwa.

Our assessment is that the current earthquake poses no threat to nuclear plant or the safety of those living in the Fukushima region. However, it proves how vulnerable the region is to such activities. The Fukushima Daiichi nuclear power plant meltdown and ensuring leakage of radioactive materials was a disaster on the scale of Three Mile Island and Chernobyl. The health of the ecosystems immediately surrounding the Fukushima Daiichi nuclear power plant is threatened by radioactive isotopes that easily bioaccumulate such as  I -131, as well as isotopes with long half-lives such as Cs -137. However,  we feel that the natural resilience of marine ecosystems and the rapid diffusion of radioactive isotopes will minimize adverse health effects in animals in the nearby ecosystem.