Nothing could have illustrated the threat posed to journalists better than the utter disregard shown for world opinion and international law by Belarusian strong man Alexander Lukashenko when he diverted Ryanair flight from Athens to Vilnius, Lithuania’s capital, to the Belarusian capital Minsk on the pretext of a “potential security threat on board.”

Upon landing, Pratasevich, the former editor in chief of one of the most popular Telegram news channels in Belarus, was promptly arrested. While contempt for the media may be the cornerstone for authoritarian regimes, it is a sad commentary that there is an increasing trend among democracies to subvert the autonomy of the media. 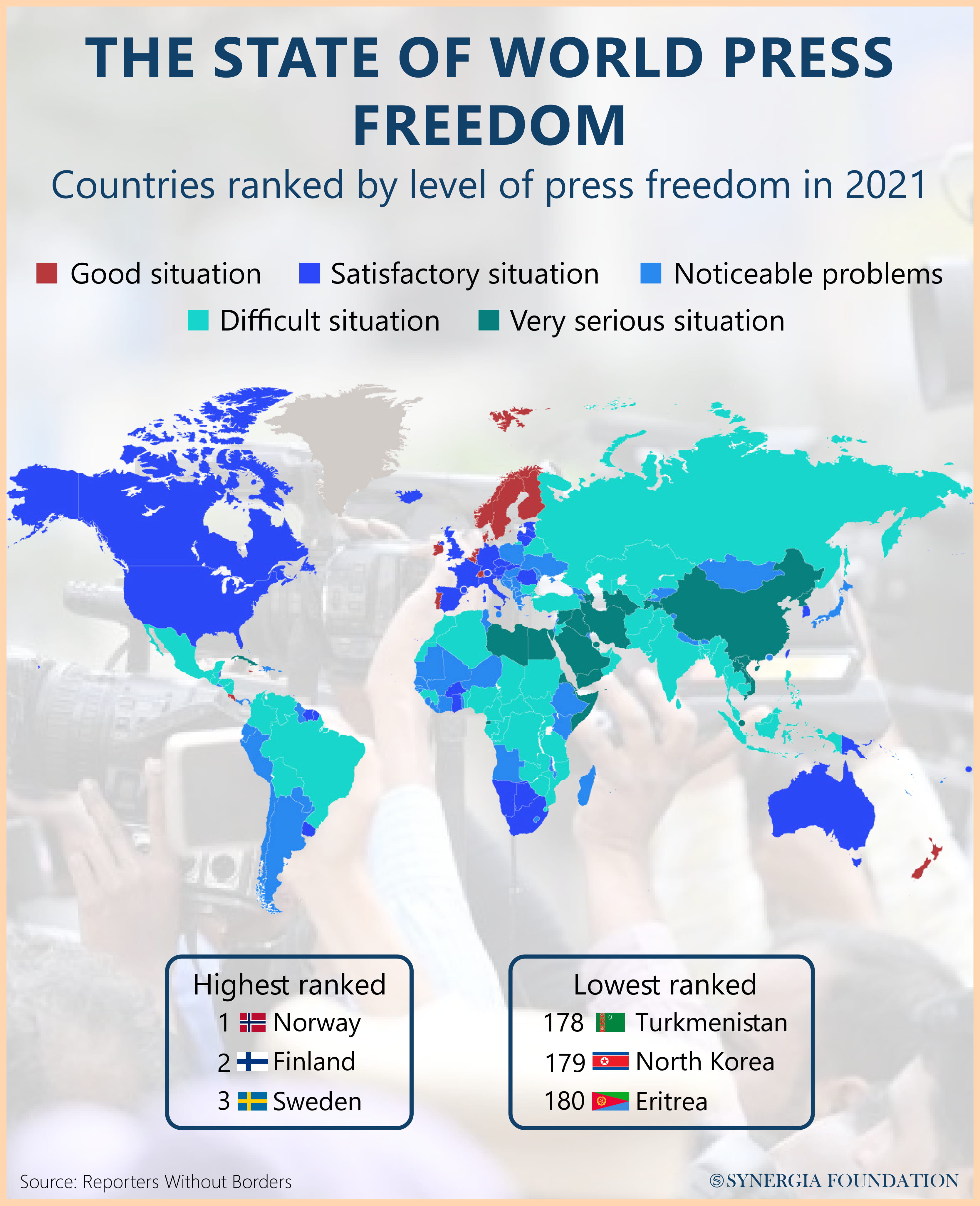 One of the most critical threats is geopolitical, where leaders of democratic, authoritarian, and dictatorial dispensations attempt to suppress the circulation of fair and transparent information. They impose their visions of a world without pluralism and independent journalism. Compared to 2019, arrests of journalists shot up by 1200 per cent in the U.S. Recent reports uncovering seized phone records of journalists further reveal the intrusion on U.S. media’s First Amendment rights.

Half of Eastern Europe is witnessing an increase in authoritarian regimes, with a matching rise in cases of state ownership and extensive censorship protocols. In Israel, four high-profile journalists have been assigned private security over receiving death threats, while more journalists have faced on-ground attacks over their reporting. The digitisation of media comes with its own share of threats. Since 2013, the U.S. National Security Agency has used its sprawling 1.5million sq ft Utah Data Centre to store and analyse data captured from around the globe.

This surveillance data can enable the government to dig deep into a reporter’s research, trace the sources and, if found worthwhile, enable real- time eavesdropping. The sanctity of source protection, so essential for investigative journalism, has been torn asunder by this capability. In fact, in a 2013 scoop, using documents provided by Snowden, the German Der Spiegel magazine broke a story on NSA breaking into the internal communication system of Al Jazeera broadcaster.

The unprecedented rise In digital media and especially social media has blurred the lines for gathering fact- checked information and creating a culture of clickbait and fake news. The lack of appropriate regulations in the digitalised and globalised platforms has contributed to an environment of disinformation. This, in turn, has been grasped by regimes of all sorts to pass laws, which, on the pretext of curbing fake news, enable tougher crackdowns on journalists and independent media houses.

The Digital Security Act 2018 passed in India, for example, curbs the freedom of the press. It allows forces to carry out arrests, without a warrant, of those who criticise the government online. Singapore introduced a similar law that undemocratically restricts the freedom to inform on the pretext of combating cybercrime and disinformation. Of even greater concern is the Indian Information Technology (Intermediary Guidelines and Digital Media Ethics) Rules, 2021. Although mainly focusing on online platforms like Facebook, YouTube, Amazon, and Netflix, it also covers “publishers of news and current affairs content.” It grants the government the power to remove any online content in news articles, a kind of censorship unimaginable in the printed media in normal times.

Media undoubtedly is a big business. The capitalist model in the media sector dates to the first few decades of the twentieth century, where the emergence of newspaper industries dominated the market, catalysing the potential of profitability, and attracted advertisers to the industry. Consequently, the consolidation and decline of newspaper diversity were perceived as the early threats to press freedom. The financial capability of media outlets is a crucial factor that determines their ability to resist pressure and engenders the phenomena of ownership concentration.

This also triggers conflicting ideas concerning journalistic ethics by putting business or national interests first, which further causes public distrust of media. Today, Hungary, Serbia, Poland, and the Czech Republic are few countries that have recently witnessed a shift in the ownership and consolidation of media outlets to state-owned or owned by wealthy individuals. When media houses become state-owned, they lose the ability to provide non-partisan news and merely function as a medium that furthers totalitarian propaganda. The ability to hold governments accountable to truth is weakened. Not only does it ossify a culture of impunity, but it also weakens the informed voting processes in a democracy.

Since 2013, Reporters Without Borders (RSF), a media watchdog organisation, has globally recorded a 12 per cent decline in press freedom. In 2020, the list of countries offering a suitable environment for free journalism shrunk to less than a dozen. RSF’s Press Freedom Index revealed that the coronavirus pandemic had exacerbated the repression of free media. A poll commissioned by the Alliance of Democracies Foundation finds that ‘citizens rate their democratic countries’ handling of the COVID crisis poorer than other less democratic countries (among 50,000 respondents in 35 countries)’. Several leaders promoted unproven COVID-19 remedies and false claims about the virus – from Asia to America.

Some countries took a step further to track down journalists who were reporting on infection rates, death tolls, and covering live demonstrations on the ground and either denied access to the report or were the primary targets for arrest. Disregarding the RSF rankings before 2020, there is a notable decline in the number of countries enlisted in the ‘white zone’ of the index in the wake of the global health crisis. The common sentiment that has accelerated official limitations on media journalists and proved to be detrimental to the freedom of the press globally is the fear of damage to one’s reputation.