Scientists have reportedly detected traces of the earliest light in the universe. According to the latest research that has been published, this light is thought to have..

Scientists have reportedly detected traces of the earliest light in the universe. According to the latest research that has been published, this light is thought to have emanated from the first stars formed after the Big Bang, billions of years ago.

The Big Bang Theory is the leading explanation about how the universe began. Research has proven that that the universe did in fact have a beginning. The big bang is an attempt to explain how the universe developed from a very tiny, dense state into what it is today. This theory was born of the observation that other galaxies are moving away from our own at great speed, in all directions, as if they had all been propelled by an ancient explosive force. Detailed measurements of the expansion rate of the universe place the Big Bang at around 13.8 billion years ago, which is thus considered the age of the universe.

The Universe is all of space and time and their contents, including planets, stars, and all other forms of matter and energy. The size of the Universe is still unknown. The Big Bang theory is the prevailing cosmological description of the development of the Universe. Some estimates note that there ought to be around 100 billion stars in the Milky Way itself. Gaia mission, a European Space Agency space probe was launched in 2013 to understand more about the observable universe. "Gaia will monitor each of its 1 billion target stars 70 times during a five-year period, precisely charting their positions, distances, movements and changes in brightness," ESA said on its website. "Combined, these measurements will build an unprecedented picture of the structure and evolution of our galaxy. Thanks to missions like these, we are one step closer to providing a more reliable estimate to that question asked so often: 'How many stars are there in the universe?” 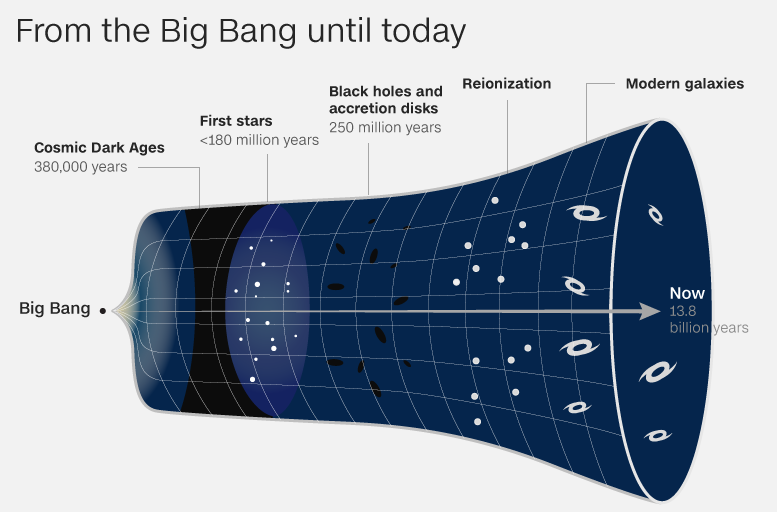 In what has been described as “revolutionary”, scientists have reportedly detected traces of the earliest light in the universe. This light is thought to have emanated from the first stars formed after the Big Bang, billions of years ago.

“Finding this minuscule signal has opened a new window on the early universe,” said Judd Bowman of Arizona State University, whose team set out to make the detection more than a decade ago. “It’s unlikely we’ll be able to see any earlier into the history of stars in our lifetime.” The report was published in Nature journal on February 28th, 2018. Researchers have called it a “fingerprint” on the genesis of the universe. “Telescopes cannot see far enough to directly image such ancient stars, but we’ve seen when they turned on, in radio waves arriving from space,” said Bowman.

Physicists have stated that after the Big Bang occurred, there was only darkness for 180 million years. This period is called in cosmic history as “Dark Ages.” The Big Bang was followed by a cool down and neutral hydrogen atoms were formed. These atoms were then pulled together due to gravity and this sparked the initial stars.

“The team have to pick up radio waves and then search for a signal that’s around 0.01% of the contaminating radio noise coming from our own galaxy,” said Andrew Pontzen, a cosmologist at University College London. “It’s needle-in-a-haystack territory.”

"It's very exciting to see our baby stars being born," Keith Bannister, astronomer at Australia's Commonwealth Scientific and Industrial Research Organisation (CSIRO), told CNN. "(Although) we can't see the stars themselves, we're seeing the effect they have on the gas around them."

Lincoln Greenhill, a senior astronomer at Harvard University, said, “We know so little about it that there are many theories as to what dark matter is,” he said. “Many may shortly be eliminated from the running.”

Our assessment is that that discoveries like these continue to prove that there is much about the Universe that we don’t know. However, with improved technology, scientists continue to make new, groundbreaking discoveries.