Fall of a Behemoth

Faced with a mountain of debt that exceeds $300bn, the Chinese property developer ‘Evergrande’ has sparked great concern in global markets. It has already missed scheduled coupon payments on two-dollar bond tranches, with reports indicating that the cash-strapped company will struggle to make payments in bonds and wealth management products over the coming months. This raises the prospect of one of the largest defaults in recent history, as analysts predict contagion risks spreading throughout the world’s second-largest economy.

Formerly known as the Hengda Group, Evergrande is one of the largest real estate developers in China. It was founded in 1996 by Chine billionaire Xu Jiayin when the Communist Party pursued a policy of mass urbanisation, moving millions of Chinese people from the countryside to the cities. This proved to be a conducive environment for the growth of the real estate sector in the southern city of Guangzhou.

Listed on the Stock Exchange of Hong Kong in 2009, Evergrande raised nearly $722 million in its initial public offering. Over the following years, it grew to be one of the biggest firms in the country, directly employing nearly 200,000 people and indirectly sustaining more than 3.8 million jobs every year. Its business was predicated on a highly debt-dependent growth model, which helped it to accumulate a vast portfolio of real estate projects.

Although the company made its name in residential property, it also diversified its business into other sectors like electric vehicles, sports, theme parks, film and TV production, food and beverages, healthcare etc. The expectation was that its presence in such priority segments would incentivise the state to support it financially if the accumulated debt got out of hand. 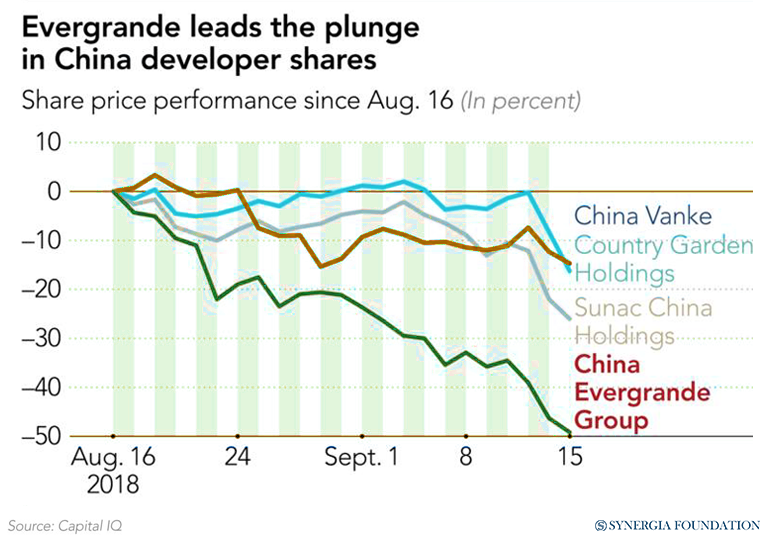 Currently, Evergrande has a 30-day grace period before its non-payment on bonds constitutes a default. It is also due to pay $15 billion to creditors by the end of 2021. With the debt-laden conglomerate in no position to stave off these liabilities, there is much soul-searching about the root of the problem.

Experts believe that it is a systemic issue, as China’s financial sector encourages risky entities to borrow for an extended period until they are subsumed by their own over-indebtedness. The regulators are often tolerant of such questionable lending practices because the investment in real estate by developers like Evergrande helps local governments to earn land revenues, even while hundreds of citizens can legitimately dream about becoming homeowners.

However, with the onset of the COVID-19 pandemic and related lockdowns, the economy has slowed down, thereby affecting property purchases. Concomitantly, the Chinese government has enacted a series of measures to curtail speculative investments in property as a part of a larger initiative to tackle the bad loans problem in the banking sector. For instance, a policy called the ‘three red lines’ has been put in place, which seeks to deleverage the balance sheets of property developers. In other words, strict caps are imposed on the ratio of debt that a property developer can hold in relation to its assets, equity, and cash.

As a result, Evergrande has found itself in a position where it has to pay back a substantial amount of debts to meet the criteria mandated by regulators. However, it is not able to sell enough apartments at the required pace to ensure compliance.

Predictably, this looming crisis has spooked buyers in the market, with other real estate developers also witnessing a decline in property sales and stock prices. In fact, reports indicate that yet another Chinese developer– Fanstasia Holdings has missed $315 million in payments to lenders. As these strains on the country's outsized property sector increase, there are concerns about a liquidity crunch across the financial sectors. After all, more than 70 per cent of China’s urban wealth is locked up in the property sector. Moreover, increased financial fragility threatens to have a contagious effect on the real economy, with some even equating it to the Lehman crisis in 2008.

While the Chinese state has asserted that it will no longer allow developers to take out loans they cannot pay back, it faces a dilemma with respect to Evergrande. Given that the company’s liabilities account for almost 2 per cent of the country’s GDP, if it goes under, there would be profound consequences for the Chinese economy. As a result, government regulators are now reportedly working out a debt restructuring plan, attempting to find companies that may be willing to buy out Evergrande and its assets. 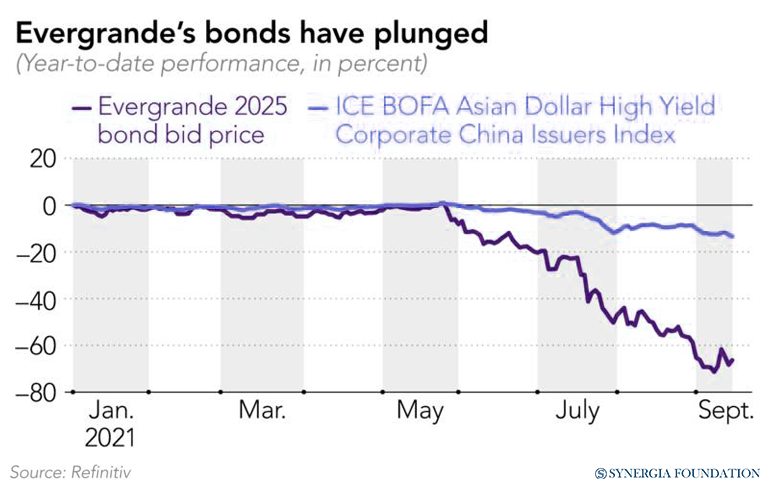 While the overheated property market in China has created significant concern, some experts believe that Evergrande’s debt woes are unlikely to cause the same fallout as the collapse of the Lehman Brothers. According to them, there are considerable differences between the two crises, as Evergrande is a credit-fuelled housebuilder with land as its assets. Meanwhile, the Lehman Brothers was a blue-chip investment bank holding financial assets. Given that the value of land is more transparent and stable than financial instruments, it is unlikely that the prices would crash significantly.

Moreover, a sharp increase in credit distress in sectors other than real estate is not expected, as Evergrande’s liabilities of $305bn are around half of Lehman’s, with the Chinese government exercising a higher degree of regulatory control than Western countries. Considering all these factors, the Evergrande problem has been attributed to cash flow issues, as opposed to broader systemic risks.