A scandal over the cut-price sale of public land shook the Japanese government after the finance ministry admitted falsifying documents to exclude the names..

A scandal over the cut-price sale of public land shook the Japanese government after the finance ministry admitted falsifying documents to exclude the names of Prime Minister Shinzo Abe and his wife Akie.

Shinzo Abe is presently serving as the 57th Prime Minister of Japan and Leader of the Liberal Democratic Party (LDP) since 2012. He is the third-longest serving Prime Minister in post-war Japan. Abe is known for his various contributions to Japan and its economy over the years and has repeatedly reinforced his commitment to the fiscal reforms set forth by his predecessor, Jun'ichirō Koizumi. He has taken several steps toward streamlining the Japanese budget by appointing tax policy expert, Kōji Omi, as Minister of Finance.

The prime minister has taken a positive attitude with respect to North Korea, especially regarding the North Korean abductions of Japanese citizens. Additionally, he has publicly recognized the requirement of improved relations with China. He also stated that China–Japan relations should not continue to be based on emotions.

Abe has expressed interest in strengthening political, security, and economic ties within the Southeast Asian and South Asian regions. In his two terms as the prime minister of Japan, Abe enhanced the strategic Japan-India relationship. He also initiated the Quadrilateral Security Dialogue between Japan, the United States, Australia, and India in 2007. With respect to Indian foreign policy, the premier aims to boost Japan's economic indicators, while gaining a key partner in Asia.

Shinzo Abe and Finance Minister Taro Aso face growing pressure over a suspected cover-up of a cronyism scandal that has shaken the ruling government for more than a year. Recently, copies of documents showed that references to Abe, his wife, and Aso were removed from finance ministry records of the discounted sale of state-owned land to a school operator with ties to Abe’s wife, Akie.

Thus far, the prime minister has denied that he or his wife did favors for the school operator, Moritomo Gakuen, and said he would resign if evidence was found that they had. However, references have not yet confirmed Abe or his wife’s direct involvement with the case. 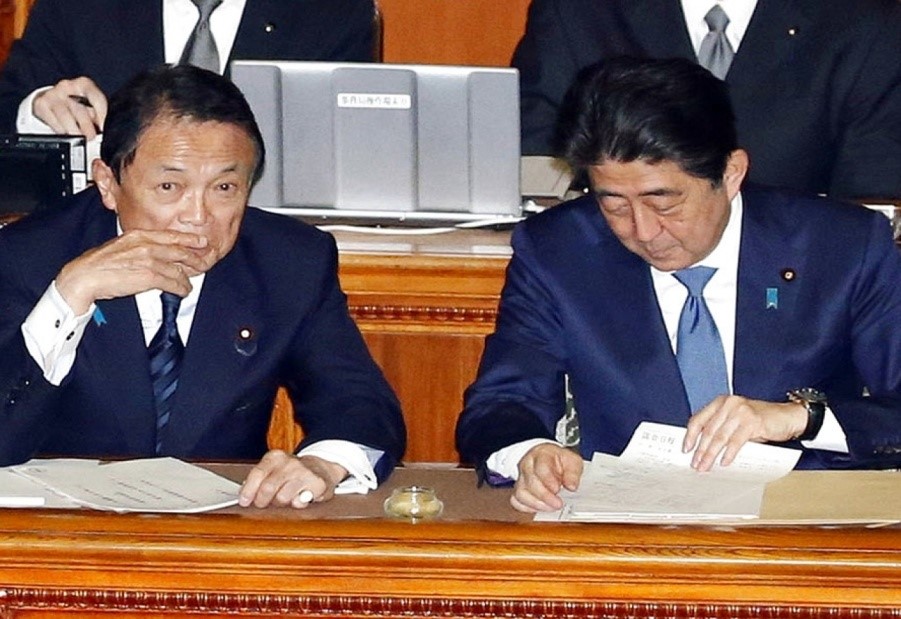 The Japanese finance ministry admitted that it made 14 alterations in documents submitted to parliament relating to the sale of land in Osaka to Moritomo Gakuen, an ultra-nationalist school operator.

Alterations occurred between February and April last year and were made by “a group of staff in the financial bureau,” said Aso. Aso said he did not know about the alterations and blamed the senior bureaucrat in charge and has refused to resign.

Moritomo Gakuen is notorious for its nationalist curriculum, which is known to instill patriotism in small children, and its links to senior politicians in the ruling Liberal Democratic party. The scandal began in 2016 when Moritomo paid ¥134m for land with an appraisal value of ¥956m and Akie Abe was to be named honorary principal of a new primary school on the site.

No evidence has emerged tying Abe to the sale. However, unedited documents show that bureaucrats involved in the sale were aware of the political backing for Moritomo.

Our assessment is that suspicion of Abe’s involvement in such a scandal could slash his ratings and negatively affect his chance to run for a third term as leader of the Liberal Democratic Party (LDP). However, victory in the LDP’s September leadership vote would put him on track to become Japan’s longest-serving premier. Although Abe has denied any involvement with the land sale, and there is no evidence suggesting that national leaders had taken part in the sale, it will still be difficult to convince the masses and escape questions about why the documents were altered by the finance ministry.