Soon social media giant, Facebook may see decline in the 12-17 age demographic as younger users are likely to gravitate towards Snapchat.

Research group eMarketer has warned that some young users may not even join Facebook in favor of Snapchat and Instagram.

In comparison, Snapchat is a much smaller and newer company. It was started in 2011 by Evan Spiegel, Bobby Murphy, and Reggie Brown. Users can share messages or photographs through this medium, however it is only available for a short period of time. It has 166 million daily active users and is considered popular among Millennials.

Facebook has introduced a feature called “stories” which is similar to how Snapchat functions. However, it has not quite captured the attention of the younger demographic the way Snapchat has. 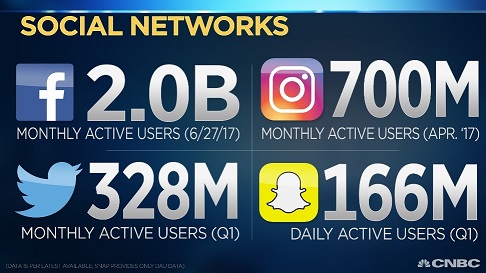 In 2017, Facebook reported higher than expected revenue. Its stocks have risen significantly as well. In contrast, Snapchat has struggled. The social media company reported worse-than-expected quarterly results and its stocks fell as a result.

However, its tide is likely to turn with teenagers flocking exclusively to the platform. According to eMarketer senior forecasting analyst Oscar Orozco, “teens and tweens” will begin migrating to Snapchat and Instagram (owned by Facebook). He said, “Both platforms have found success with this demographic since they are more aligned with how they communicate—that is, using visual content. Outside of those who have already left, teens and tweens remaining on Facebook seem to be less engaged—logging in less frequently and spending less time on the platform. At the same time, we now have ‘Facebook-nevers’—children aging into the tween demographic who appear to be overlooking Facebook altogether, yet still engaging with Facebook-owned Instagram.”

In 2013, Facebook tried to acquire Snapchat, however its attempts were ultimately unsuccessful. The teen demographic is important in terms of generating ad revenue. eMarkerter has said that Facebook usage in the US in the 12 to 17 age group will fall 3.4% vs 2016. Snapchat’s US monthly users are expected to grow 25.8% in 2017 to 79.2 million monthly.

Our assessment is that unless Facebook is able to capture the interests of the younger demographic through innovative video content, it will continue hemorrhaging more users to Snapchat and Instagram. However, the sheer size and massive revenue that Facebook currently boasts will prove to be an advantage if it wants to mount a challenge to Snapchat.