The End of Roe v Wade?

A leaked supreme court draft hints at an imminent turnaround on the historic 50-year-old decision making restrictions on abortion unconstitutional.

The landmark decision in the 1973 Roe (or Norma McCorvey) vs Wade (Dallas County District Attorney Henry Wade) case gave federal protection to people seeking abortions. In the majority opinion (7-2), the court ruled that Texas laws which criminalised abortions in most situations violated a women's constitutional right to privacy. Rights of privacy in U.S. law are a combination of principles found in the constitution. However, the court disagreed with Roe that a woman should be able to terminate a pregnancy at any time and in any way she wanted. The presiding justice noted that only a compelling interest of the state justifies limiting a women's fundamental right to privacy. Since at 24 weeks of pregnancy, the foetus has the capability to live outside the mother's womb, and this would present itself as a compelling interest to the state; hence states could place regulations based on this.

Although Roe v Wade has been challenged before, it has not been overturned in its entirety. On May 2nd, Politico leaked a supreme court draft of a majority opinion for overturning its decision on Roe v Wade. The leaked draft shows that justice Samuel Alito describes Roe as "egregiously wrong from the start" and says "it must be overruled". 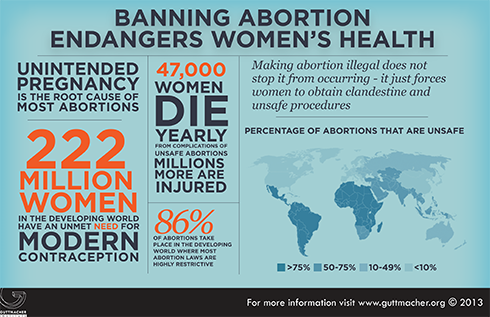 Ever since the 1973 decision, there have been multiple challenges to Roe v Wade, and some of them have been able to narrow its scope. For example, in May 2021, Texas passed a law that effectively banned all abortions after a heartbeat could be detected in a foetus (6 weeks). The Texas law was made in a way that the state was not banning abortions, but rather private citizens were allowed to file civil suits on any individual who got an abortion after six weeks or anyone who helped that individual get that abortion. The enforcement was shifted from state officials to private citizens. The supreme court chose not to interfere with this law.

Back in 2016, former President Donald Trump promised voters that if he could appoint justices, he would make sure to appoint pro-life justices and that Roe would be overturned. During his term, three of his appointees now give the apex court a conservative supermajority.

It is expected that half of the states in the country will go back to having laws similar to pre-Roe. If the court goes ahead and overruns Roe, it raises an important question about the legitimacy of precedent and the potential impacts of not following it in the future. Even Justice Altio, who recommends revoking the law as per the leaked draft, admits that the court standing by its precedent is important for many reasons, such as respect for the rule of law, protection of people, discouraging endless re-litigation, and it shows that the court works based on accumulated wisdom and not just temporary ideology.

Women’s rights face an uphill task if Roe is overturned; studies show that bans on abortion do not reduce the rate of abortions, and global WHO data backs this. This means that women in America living in states that will ban abortions will either travel to other states (depending on laws) or get illegal abortions. Illegal abortions are unsafe, and they are a leading cause of maternal death (worldwide).

When we look at abortions from a purely economic point of view, it is clear that bans on abortions will overwhelmingly impact low-income people. Firstly, lower-income people may not be able to travel to other states as easily to obtain abortions (given that laws allow this). Secondly, if women are forced to carry pregnancies to term, lower-income women will not have access to the best health care, and thirdly, the cost of having and raising a child will be too much of a burden for people who are not financially ready to have a child. Some economists argue that access to abortions helps alleviate people from the poverty trap. To make matters worse, 75 per cent of women who seek abortions are low income. Access to abortions has also helped reduce teen motherhood by nearly 35 per cent. It has been observed in low-income neighbourhoods, children born out of single teen pregnancies have a greater chance of drifting into crime and drug abuse.

Even more serious would be that federal funding for abortions would no longer exist; even in states where abortions would stay legal, the poorest people would continue to be the most impacted. This could be prevented if state governments could cover the federal funds and give people abortions at subsidised rates.

Although abortion is a partisan issue, the majority (59 per cent) of the American public believe that abortions should be legal in all or most cases. Pro-life or anti-abortion groups have welcomed the news. "Today is a day for courage and hope" was a tweet from a pro-life organisation known as Americans United for life. In the late 1960s, as states started to liberalise abortion laws, a group of Catholic doctors, nurses, housewives and lawyers came to oppose this liberalisation. In 1967 the national right to life committee started. These Catholics were joined by other (predominantly Christian) religious groups. Although they were unsuccessful due to Roe v Wade, the movement lived on, and the core of the moment was the idea that even an unborn foetus has the right to life, and abortion is morally wrong.

In many countries in Asia, abortions are available to women on request (different jurisdictions have different time limits on when abortions are freely accessible), with the harshest restrictions on abortion in African and South American nations.

India has made progress, but activists still say more work has to be done. The gestation limit for getting an abortion has increased from 20 to 24 weeks; however, this is only applicable (the extra 4 weeks) to women who have been raped or are incest survivors. Previously, women needed permission from one doctor to get an abortion if it was up to 12 weeks and two doctors if it was between 12-20 weeks; now, approval from only one doctor for abortions up to 20 weeks is enough. Women in India can now terminate unwanted pregnancies regardless of their marital status, which is a major move from previous law. However, socially, abortion is still stigmatised in India, even in the medical community. This encourages unsafe abortions, which in many cases turn deadly. According to the Lancet, in 2015, out of 15 million abortions in India, over 78 per cent were performed outside medical facilities!

Legally, it is bad practice in legal terms of the Supreme Court goes back on a precedent. This is a very rare move and may give an impression of passing a judgment under political pressure and ideology.