Emerging Front Lines for Terror in the African

The Sahel is the new terror frontline where a few are waging a pitched battle for survival. Unknown to the larger world, their success or failure will matter. 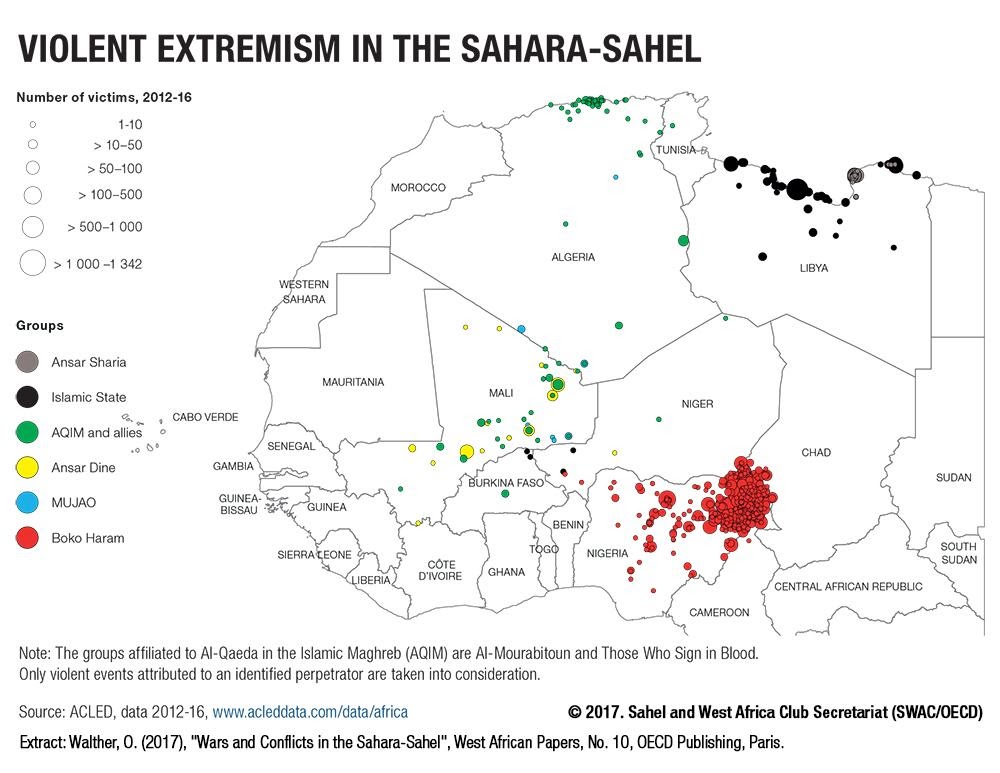 The United Nations Office for West Africa and the Sahel (UNOWAS) was set up in 2016,  to combat relentless terrorism, an unprecedented level of violence, and other cross-border threats in the region. Ignored by world headlines, a wave of terror attacks and senseless violence is rocking the Sahel region, an extensive sub-Saharan area that stretches from Sudan to Senegal, threatening to spread. In Niger, Mali and Burkina Faso, terror-attack related deaths have increased five times from 2016 to over 4000 in 2019. Burkina Faso is the most affected with nearly 2000 deaths in 2019 and about half a million internally displaced, and over 25,000 have fled to neighbouring countries.

Violence is escalating over a growing swath of West Africa

Exploiting the desperate poverty of the region and greatly assisted by the abysmal lack of governance, Islamic State (IS) in the Greater Sahara and al Qaeda in the Islamic Maghreb are launching deadly attacks with impunity.  Both IS, and al Qaeda appeared to have reached a collaborative understanding, which is a rare reversal of their often cut-throat rivalry in the Middle East and even in Afghanistan. Their attacks have reached a crescendo in Burkina Faso, Mali and Niger. The targets are chosen indiscriminately and vary from bridges, government buildings and even schools. Over three thousand schools have been forced to close by armed cadres. The most worrying indicator is that the arc of violence is now spreading southwards from the Sahel into earlier untouched regions of Ivory Coast, Benin, Togo and Ghana.

As the violence spreads and the intensity mounts, there is a real fear that the Sahel is fast becoming the major amphitheatre in the global war on terrorism.  Crushed and leaderless in the Middle East, both IS, and al Qaeda are increasingly looking at the Sahel for their resurrection. In the Sahel, ethnic and tribal ties stretch across contradicting ideologies of IS and al Qaeda, both find it easier to coordinate and share resources, leading to a far more sophisticated campaign. They first isolate large chunks of populations by destroying bridges, crops and mining roads and kill community leaders like mayors and village heads. Next, they isolate/weaken the state authority by targeting security force bases and denying them mobility. Separated and weakened, the symbols of state authority are demoralised and flee without even putting up a fight.

Unlike the Levant and Iraq, where the IS never got time to establish a functional administration, in the Sahel, the military campaign is shadowed by an equally sophisticated quasi-civilian administration. Once military control is established in a particular region, all economic targets like gold mines, and standing crops are quickly seized and all economic corridors are controlled. Tax is collected ,and harsh but prompt justice as per the Sharia speedily dispensed. Fighters, even those not local, are marrying into local tribes to merge with the community.

As per human rights groups, the Sahel is proving to be a fertile ground for the Islamic Terrorism because of long-standing grievances of the local populace against poor governance, widespread corruption and now, increasing human rights violations by a poorly trained military.  A series of smaller insurgencies are now amalgamating into one major one.

The West to the Rescue

It is not that the world has been unaware of the growing crisis in the Sahel. The West led by the United States has been buying time for the poor governments by giving substantial aid to address poverty, education and health care. Concurrently, military trainers from Europe and a significant American special forces presence is trying to stem the tide.

The U.S. has been leading the efforts with $323 million security assistance to the G5 Sahel countries- Burkina Faso, Mali, Niger, Chad and Mauritania.  A G5 joint force of 5000 men has been created, assisted by western military advisers and trainers.

The Americans under their Africa Command (AFCON) have the largest footprint that includes about 5200 troops and 1000 Defence Department, contractors. “We can have a large effect with a very small force,” said. Gen. Dagvin R.M. Anderson, the top American Special Operations officer in Africa. US air assets are available on call to support local forces.  However, the Trump Administration is contemplating a troop cut of over 1000 and wants the European allies to make up the deficit.

France, a former colonial power of West Africa, has deployed over 5000 troops and moving in more to fill the gaps left by the American withdrawal. French troops help militaries in Niger, Chad and Mali combat insurgents.  Other European countries are also pitching in with about 400 Special Operations soldiers.

The Great Game once again

Despite the acute poverty of the region, games of the great powers are visible in the Sahel too. America, as it reduces its presence in Africa in general and the Sahel in particular, vacates space for China and Russia. China has a heavy presence in the continent with 52 embassies against 49 of U.S. and dangles infra investment as an inducement.

Russia, after its success in Libya and Syria, is keen to supply arms and mercenaries for overall influence. France has accused Russia of conducting disinformation campaign in the Sahel insinuating that France is in cohort with the jihadi organisations. Russia is still smarting from the overthrow of its close ally, Gaddafi from Libya, and lays the blame squarely on the U.S and its European allies for destabilising the Sahel by wreaking havoc in Libya.

Is it too little too late?

The government forces, despite western advisers, are hard-pressed. In their current state of battle worthiness, they are unable to engage the extremists comprehensively, they can only try to contain the threat and limit the areas under terrorist control.

Local governments are trying to implement the basic tenets of a counterinsurgency doctrine by building trust with the locals, creating de-radicalisation programmes and improving basic services like education, water and primary health care. But there is no progress in the root cause; deep-rooted systemic corruption and lack of social and political reforms.

Alice Hunt Friend of the Centre for Strategic and International Studies in Washington, speaking to the media, summed it succinctly, saying, “There are no fully military solutions here, just holding actions.”