The highly transmissible Delta variant of the Covid-19 virus is steadily derailing the Asian economy. With an increase in caseloads and a low vaccination roll-out, economic recovery in the region is likely to be stretched out.

First detected in India, the Delta Plus (B.1.617.2.1/(AY.1) variant is a new mutant strain of the SARS-CoV-2. While it is causing an increase in caseloads for Europe and the U.S., it has generated large-scale breakouts/waves in the ASEAN region. Indonesia is one of the worst afflicted countries, prompting it to impose lockdowns in cluster areas. The infection, however, seems to have spread with hospitals being placed under extreme stress.

On July 12th, 2021, South Korea imposed a ‘Level 4 lockdown’ after the nation reported 1,316 COVID-19 cases, which was its highest single-day increase since the onset of the contagion. The variant virus seems to be infecting those in their 20s and 30s, with most of them being asymptomatic or displaying mild symptoms. Thailand is also experiencing its third wave caused by the delta variant. Greater Bangkok, along with four other provinces, has been locked down to control the spread of the variant.

With just a few days left before the 2021 Olympics are scheduled to start, the surge of Covid-19 cases in Tokyo has created much worry and anxiety. The government has declared a state of emergency in the capital region as well as a ban on spectators. 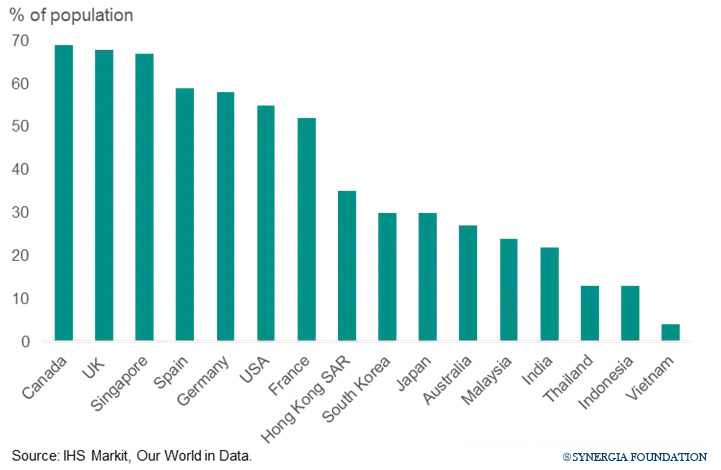 In the first half of 2021, major economic indicators had pointed to a speedy recovery in the overall Asian market. However, the Delta variant is now threatening to negate those early assumptions and undercut an economic recovery. Faced with a severe spread of the virus, coupled with lockdown restrictions, Asian economies are turning risk-averse. The Thai Baht has dropped to a yearly low of 32.27 per dollar. Asian equities are also facing a gradual slump. On July 9th, they collectively stumbled to a two-month low. While South Korean stocks pared 1.5%, Taiwan whittled 11% of its stocks. The unsteady nature of the economy has prompted investors to flock to the safety of bonds and other safe-haven assets like gold.

This, in turn, has decreased the U.S. Treasury yield and caused a decline in global stocks. While such inflation is minor, the fact remains that the unsteady nature of the Asian market is bound to restrict the U.S.’s economic growth.

One of the main reasons behind the rise in cases has been the low vaccination rollouts in several parts of Asia. Japan’s two-dose average is only 10.4%. South Korea has managed an effective 30% vaccination rate, but only 9% are fully inoculated. Indonesia has one of the lowest testing rates in the world with only 49 being tested for every 1000 people. Its vaccination roll-out is also extremely low with only 5.5% of the population is fully vaccinated.

According to the UN Secretary General Antonio Guterres, while more than 70% of the population in developed countries are fully vaccinated, the figures are as low as 1% for low-income countries. Such differential rates of vaccination are a clear threat for the global economy.

Developed countries, especially the G-7 members, have been accused of ‘vaccine nationalism’. They are criticised for hoarding more vaccines than they need, instead of donating or selling the same to other nation-states. This has effectively hampered vaccine supply chains as well as inoculation rates in Asia.

Indeed, the finance ministers of G-20 countries have recently flagged their concerns about the threats to economic recovery, posed by the Delta variant. They have called for an acceleration of vaccination programmes and the resolution of supply chain issues.