Chinese President Xi Jinping told US Defense Secretary James Mattis that China will not give up any territory that it considered its own. This comes as a blunt warning..

Chinese President Xi Jinping told US Defense Secretary James Mattis that China will not give up any territory that it considered its own. This comes as a blunt warning as tensions between both countries are mounting over trade hostilities and China's increasingly assertive claims over the South China Sea.

The South China Sea is at the heart of a land and water dispute between China, the United States, and much of Southeast Asia. China’s claim to the region is historic going back to the Xia and Han dynasties. The US has maintained that the region was part of international waters. Other countries that are disputing the South China Sea include Malaysia, Indonesia, the Philippines, and Vietnam. Vietnam has become the most vocal critic of China’s claims to the sea, particularly since Filipino President Duterte’s China-friendly stance.

China has backed its expansive claims with island-building and naval patrols. The United States says it does not take sides in territorial disputes but has sent military ships and planes near disputes islands, calling them “freedom of navigation” operations to ensure access to key shipping and air routes. Read more on this here.

One of the reasons why the South China Sea is so vital to these countries is due to its strategic significance. It is a major trade route; any nation with complete control over the region would be able to disrupt trade shipments to East and Southeast Asia. Currently, $5.3 trillion worth of trade passes through the South China Sea. Much of China’s trade also passes through the Strait of Malacca, a narrow passage of water between Peninsular Malaysia and Sumatra, close to Indian naval bases in the Andaman Sea.

The island nation of Taiwan is a highly contested region in East Asia. While Taiwan is considered a province in “Greater China,” it is largely an independent state. Despite the controversy that surrounds Taiwan, the region itself is economically robust and is one of the biggest traders in Asia. Taiwan and the United States have maintained unofficial relations since 1979. Following the passage of Taiwan Travel Act by the US Congress on 16 March 2018, relations between the US and Taiwan have since maneuvered to an official and high-level basis. Last month, the US also opened a new de facto embassy in Taiwan, showing support to the government in Taipei amid mounting Chinese pressure on the island. Read more on this here. 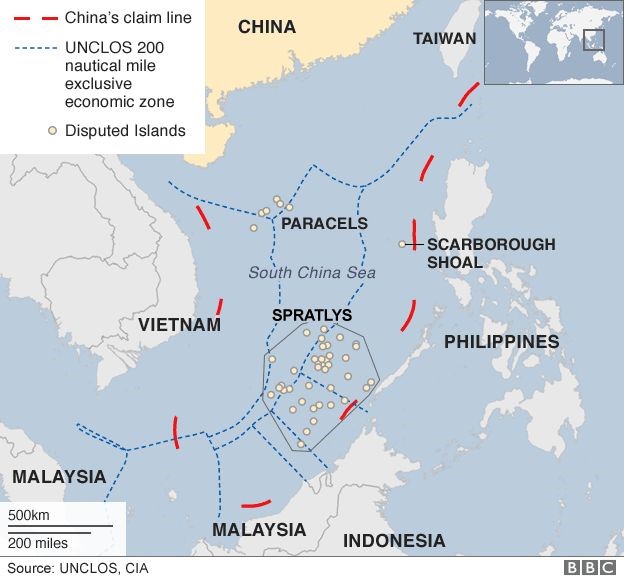 China will not give up "any inch of territory" in the Pacific Ocean, President Xi Jinping told US Defense Secretary James Mattis during a visit to Beijing. The was the first such visit by a US defense chief in more than four years.

The statement appeared to be a reference to US complaints about Chinese military deployments in the disputed South China Sea and a push by American lawmakers to expand ties with Taiwan, which Beijing considers its province. “Our stance is steadfast and clear-cut when it comes to China’s sovereignty and territorial integrity,” Xi said. “We cannot lose one inch of territory passed down by our ancestors. Meanwhile, we want nothing from others.”

The meeting demonstrates how disputes between the two countries extend beyond US President Donald Trump’s plans to introduce tariffs on Chinese goods and restrict the country’s investments. In recent months, the Defense Department has branded China a “strategic competitor”. President Xi has pledged to go blow for blow on trade. He has warned against efforts to widen divisions with Taiwan. In April, he supervised China’s largest-ever naval review in a display of its growing military reach.

“This is an important time in the history of China and the United States as we work our way forward,” Mattis said, according to the Associated Press. “I’m here to keep our relationship on a great trajectory, going in the right direction, and to share ideas with your leadership, your military leadership, as we look at the way ahead.”

Since 2014, China has launched a second aircraft carrier and outlined plans to build a “world-class” military by 2050. Meanwhile, the Trump administration has replaced Barack Obama’s “pivot to Asia” with an “Indo-Pacific” policy that looks to draw India into the regional security framework as a counterweight to China.

China is cementing its control over the disputed Spratly islands in the South China Sea. China’s militarization of the highly strategic region is a cause for concern for the region’s other claimants, as well as the international community. Analysts believe that China’s recent moves could be the next step in its ambitions to attain complete control over the South China Sea.

The ongoing South China Sea dispute is unlikely to be resolved in the near-term. Recent activities concern all Asian countries about Chinese and US military displays in the area although it is believed that China’s drilling is in accordance with international law. Due to the strategic importance of the region, the militarization of the South China Sea might threaten to further de-stabilize the region. The latest developments also indicate that many of the smaller nations like Philippines that are involved in the dispute, do not have the resources to continue countering China. It is possible that given Duterte’s acrimony towards the US, he might broach a joint exploration pact with China. This would further complicate the nature of territorial disputes.

Our assessment is that China’s stance is steadfast and clear-cut when it comes to its sovereignty and territorial integrity. We feel that China will keep a close watch on US’s interests in Taiwan. Despite condemnations from China, the US continues to sell advanced weapons to the island under the Taiwan Relations Act. We believe that China has peaceful intentions, but there would be no concessions from China about what it considers to be Chinese territory.