China-US to come to blows?

Policymakers, experts, government advisers and thought leaders have raised alarm over the looming rivalry between China and the United States, especially with regards to trade..

Policymakers, experts, government advisers and thought leaders have raised alarm over the looming rivalry between China and the United States, especially with regards to trade. The sentiments were echoed at the recently concluded China Conference that had been organized by a dealing Chinese daily.

United States and China are the two largest economies in the world. Both countries consider the other as a partner in trade and an adversary in geopolitics.

Diplomatic relations between US and China was first established in 1844 with the Treaty of Wanghia. This agreement allowed the US to trade in Chinese ports. After the Qing Dynasty was overthrown, in 1911, US recognized the legitimacy of the Republic of China (ROC) government.

When civil war broke out in 1945, between Communist Party of China (CPC) and the ROC, the US supported ROC. CPC gradually gained control of the mainland and this led to the formation of People’s Republic of China. By the 1970s, US realized the geopolitical compulsion to establish relations with PRC and officially recognized the government. It continued its unofficial support to  Taiwan through  various trade and military  deals.

The two countries have established a robust framework of trade. Currently, the US-China trade relationship supports around 2.6 million jobs in the United States. In 2015, China purchased $165 billion in goods and services from the United States in 2015. After Japan, China is the US’ biggest overseas creditor. It’s holdings of US debt is around $1.12 trillion dollars.

The U.S.–China Strategic and Economic Dialogue was created in 2009. Every year, high level representatives from both nations open dialogue to improve the economic partnership. In 2017, the meetings that occurred were reported as being “tense”. Upon conclusion, the two countries cancelled a joint press conference and did not release a statement. They also did not release a plan of action.

US President Donald Trump has previously been a critic of China. He blamed the country for loss of jobs within the US. He also has often criticized the US trade deficit with China. China's trade surplus with the United States widened in 2017 while total foreign trade volume maintained rapid growth. 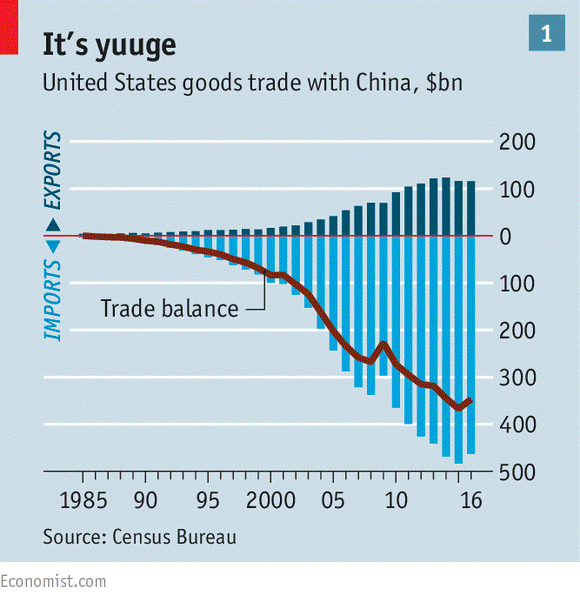 Experts now fear that the looming rivalry between US and China would have global repercussions with regards to trade and geopolitics. As the two largest economies in the world, a competition between the two nations could be a blow to globalization.

At the recently concluded China Conference organized by a leading Chinese daily, Zhang Yansheng, former Secretary General of the Academic Committee under China’s National Development and Reform Commission said, “A key issue for 2018 is whether we can avoid international conflicts and confrontation, and the relationship between China and the US will largely decide if the world can move past the current globalisation interlude.”

Trump has already labelled China a strategic competitor. In 2017, US under the leadership of Trump has shrunk its role in global politics and has resorted to increased protectionism. However, Chinese leader Xi Jinping has continued his efforts in increasing his nation’s influence around the world. He has also positioned China as the successor to the US in terms of championing free trade. Experts state that Trump could take punitive action against China. “The warning signs that point toward some sort of tough trade actions by the Trump administration towards China are unmistakable. The US business community has been … a major bulwark against protectionist measures in the United States. What we’re hearing widely is that we’re approaching a point of no return, that it’s too much, that American companies simply cannot operate in the Chinese environment in a way that’s remotely equivalent to the way that Chinese companies can operate in the US,” said Russel, who is now diplomat in residence and senior fellow at the Asia Society Policy Institute.

Former chief executive of Hong Kong Tung Chee-hwa agreed that a trade war must be avoided. “In such a big relationship, there is bound to be disagreement, but rash action on either side will only create the environment for a very serious trade war, which is not good for any country. Patient discussion and negotiation, particularly considering the long-term prospects of the relationship, will be very important,” he said.

Our assessment is that strategic trade war between China and the US would affect the world. As China continues to increase its global footprint, US under the leadership of Trump has shrunk itself. This could potentially change the world order in the near future and result in China becoming a formidable force. Given China increased affinity with Russia, the two nations could emerge stronger than the US. This could result in nations like India becoming more vulnerable. India has often accused China of illegal border incursions in the past. A much stronger China would be difficult to counter.