The ride sharing app Didi, known as “China’s Uber”, became the most valuable start-up company in the world last December. The company holds a majority share in the..

The ride sharing app Didi, known as “China’s Uber”, became the most valuable start-up company in the world last December. The company holds a majority share in the Chinese taxi market, driving out foreign competition such as Uber. In a recent interview, founder Cheng Wei announced his intention to expand to international markets.

Uber is an American technology company based in San Francisco that provides e-commerce services for ride sharing and car hire. Uber was founded by Garrett Camp and Travis Kalanick in 2008 as a mobile application that connects drivers with people who require taxi services. It is widely seen as one of the businesses responsible for the popularisation of ride sharing.

However, a series of controversies have plagued the company since 2017. This includes claims by former employees about the working conditions within the company. In addition, news emerged that a large scale data breach took place within the company. Most recently, the company had to settle a case against Google’s self-driving car, Waymo. In March this year, Uber confirmed that it will be selling its Southeast Asian operations to the local ride-sharing app Grab.

Didi Chuxing Technology Co was founded by Cheng Wei in 2012, and in based in Hangzhou, China. Known as “China’s Uber”, it is a ride-sharing company that has over 450 million users in over 400 Chinese cities. Its services include buses, car rentals, bike sharing, designated driving, social ridesharing, carpooling, and taxi services. Didi has also reportedly invested in AI research and technology.

Didi Chuxing officially replaced Uber as the most valuable start-up company in the world in December 2017, after a $4 billion investment from SoftBank. It was valued at $56 billion. Uber entered the Chinese market in 2013. In 2016, after $2 billion in losses, Uber left the market in exchange for 17.5% share in Didi. In 2016, Apple invested $1 billion in the app. According to CB Insights, three of the five most valuable start-ups in the world today are from China. 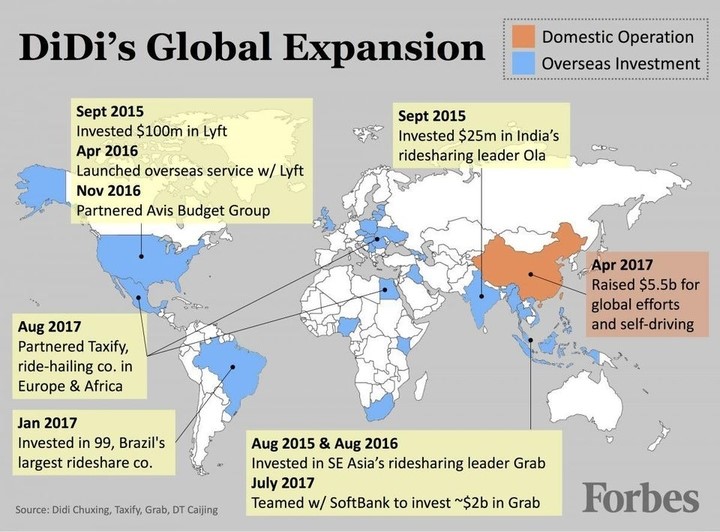 In a recent interview with BBC, Didi Chuxing founder Cheng Wei expressed his desire to take his ride-sharing business global. "The Chinese market is of course very important, but today Didi's vision is already going global," he said.

Didi has already expressed its intention to expand its markets to other Asian Markets including Taiwan and Japan. In 2016, co-founder Wang Gang told Forbes that Didi would “definitely compete with Uber globally again.” Didi has investments in the American service Lyft, India’s Ola, Taxify in Europe and Africa, and South East Asia’s Grab. In February this year, Didi announced a joint venture with SoftBank to bring ride-sharing services to the Japanese economy. Didi has also stated that it is “conducting market research and exploring extensive community partnerships” in Taiwan. Didi launched its public website in Toluca, Mexico earlier this month, and will reportedly begin operating in the country soon.

Zhang Xu, analyst at big data service provider Analysis, said, “DiDi has secured absolute dominance in China... When the domestic market is close to saturation, it’s important for Didi to go out and seek continuous growth.” Wei noted that his organisation may employ different strategies than those used by Western counterparts. “In markets where there aren't any successful local companies, then Didi will enter that market to share our experience. That's what we're doing right now," he told BBC

Wei acknowledged the data security concerns that have emerged in recent years, particularly American cynicism of Chinese technology. "Whether you're Chinese or American, data is the lifeline of any business. If you can't guarantee data security, that's going to be totally destructive for the business," he said.

While wildly popular in local markets, other Chinese apps such as WeChat have been unable to penetrate international markets. WeChat and other Chinese apps have in fact, been banned by the militaries of multiple countries, including Australia, India, and US. Chinese apps and technology firms have come under increasing scrutiny, particularly from the United States. Recently, US President Trump blocked the sale of money-transfer service Moneygram to Ant Financial, an affiliate of Chinese e-commerce giant Alibaba; the sale of Lattice Semiconductor to Canyon Bridge Capital Partners; and telecom company Huawei’s deal with AT&T.

Additionally Uber, another ride-sharing application, has demonstrated the challenges faced by ride-sharing apps expanding to other regions. Uber lost to Grab in South-East Asia. In India, it faces stiff competition from home-grown Ola.

Our assessment is that while Chinese companies understand their own markets, western markets have decidedly different characteristics. These difficulties are compounded by a lack of trust in Chinese technology. Additionally, Didi may have to compete with local businesses. Uber, as we stated previously, is losing market shares in emerging markets in Asia. Will Didi manage to overcome these hurdles, and succeed in penetrating international markets?