China is testing techniques that could be used to build a 1,000km tunnel to carry water from Tibet to Xinjiang. If completed, it will become the longest tunnel in the world.

China is testing techniques that could be used to build a 1,000km tunnel to carry water from Tibet to Xinjiang. If completed, it will become the longest tunnel in the world.

This could potentially affect the flow of the Brahmaputra river and its flow into India.

Over the next 10 years China plans on moving 250 million people - the equivalent population of Indonesia - into the country's rapidly growing megacities. To accommodate that enormous migration, the country has invested billions of dollars in massive infrastructure projects.

This includes massive highways that cut across through the continent, the largest wind-power base in the world, enormous airports and new cities in the desert. The goal behind building the tunnel from Tibet to Xinjing is to transform large swaths of desert area within Xinjiang into a prosperous region with access to water. Currently the longest tunnel in China is the Qinling Tunnel.  It runs along more than 11 miles underneath Zhongnan Mountain. It cost $473 million to build. The third third longest road tunnel overall in the world, opened on 20 January 2007.

The West Qinling Tunnel is in the middle of the Chongqing–Lanzhou Railway crossing the Qinling Mountains. It is the second longest railway tunnel in China, slightly shorter than the New Guanjiao Tunnel, which is also under construction.

Xinjiang Uyghur Autonomous Region is the largest Chinese administrative division. It is also the eighth largest country subdivision in the world. The region spans over 1.6 million km2 (640,000 square miles). It is a provincial-level autonomous region of China in the northwest of the country. It is Xinjiang contains the disputed territory of Aksai Chin, which is administered by China. In 1962, China and India fought a war in Aksai Chin and Arunachal Pradesh. The nations have since signed agreements over the established Line of Actual Control in 1993 and 1996.

The Brahmaputra is a trans-boundary river than runs that originates from China and runs through India and Bangladesh. It is located on the northern side of the Himalayas and flows into Arunachal Pradesh in India.

The Zangmu Dam is a gravity dam on the Yarlung Zangbo/Brahmaputra River 9 km (5.6 mi) northwest of Gyaca in the Tibet Autonomous Region of China. It was built to harness hydroelectric power production using run-of-the-river technology.

The Delaware Aqueduct is considered to be the longest tunnels in the world. It is the newest of the New York City aqueducts. It is 85 miles (137 km) long and 13.5 feet (4.1 m) wide. It takes water from the Rondout Reservoir through the Chelsea Pump Station, the West Branch Reservoir, and the Kensico Reservoir, ending at the Hillview Reservoir in Yonkers, New York. 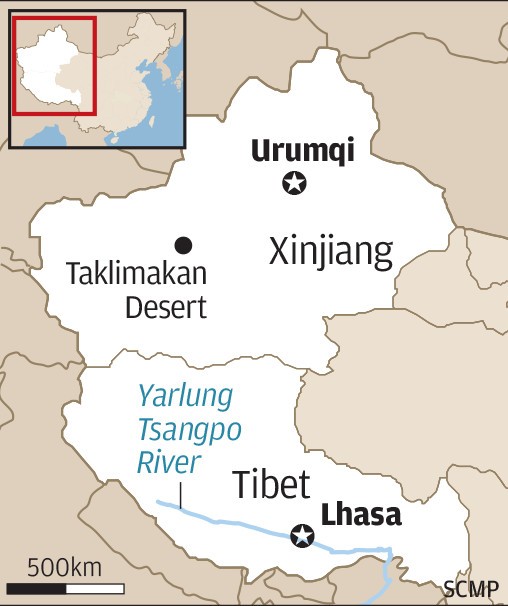 China is testing techniques that could be used to build a 1,000km tunnel to carry water from Tibet to Xinjiang. If completed, it will become the longest tunnel in the world. In a move that is likely to concern Indian authorities, the project would divert water from the YarlungTsangpo River in southern Tibet, which turns into the Brahmaputra once it enters India, to the Taklamakan desert in Xinjiang. Millions of Indian and Bangladeshi citizens benefit from the Brahmaputra river. Its delta is home to 130 million people.

The Brahmaputra river is point of contention between India and China. In 2002, India and China signed a number of agreements and Beijing agreed to share data on the water levels of both Brahmaputra and Sutlej every flood season. However, in 2017 reports emerged that China had failed to provide India with the data. An overview of the conflict can be found here.

“The water diversion project in central Yunnan is a demonstration project,” Zhang Chuanqing, a researcher at the Chinese Academy of Sciences’ Institute of Rock and Soil Mechanics, told the SCMP. He has played a key role in similar projects in China. He added, “It is to show we have the brains, muscle, and tools to build super-long tunnels in hazardous terrains, and the cost does not break the bank. Fault zones are our biggest headache. If we can secure a solution, it will help us get rid of the main engineering obstacles to getting water from Tibet to Xinjiang.”

The Chinese government has begun building another tunnel in the centre of Yunnan province that will be more than 600km long. This is being considered a “test run” for the Xinjiang project. Chinese engineers are likely to develop equipment and techniques that will aid them in the much more ambitious project. The Yunnan tunnel which will take 8 years to be built will cost around $11.7 billion.

Wang Wei, a researcher said, “No man-made structure can withstand the direct bombardment of water falling from 3,000 to 4,000 metres above. It won’t leave a mark on the surface for other countries or environmental activists to point their fingers at.”

Zhang said China would definitely go ahead with the project one day.“In five to 10 years from now, the technology will be ready and the cost affordable, and the temptation of the benefits will be difficult to resist.” Zhou Shiqiao, a researcher at the Chinese Academy of Sciences’ Institute of Tibetan Plateau Research in Beijing“It will change the landscape of an entire region. To my knowledge, no environmental evaluation has been carried out. The nature and scale of the impact remains in the dark.”

Our assessment is that China’s ambitious plan to divert the water from Tibet to Xinjiang is likely to concern the Indian government. This might affect millions in India and Bangladesh who are dependent on this water source. However, it will likely take at least a decade for the project to be greenlit due to its astronomical costs. Scientists will also have to develop techniques that will be feasible.