China gears up to launch the design of a cross-strait tunneling project that connects Taiwan with the mainland. It will be the world’s longest undersea railway tunnel. Taiwan, home to twenty-three million people, is an island off the southern coast of China that has been..

China gears up to launch the design of a cross-strait tunneling project that connects Taiwan with the mainland. It will be the world’s longest undersea railway tunnel.

Taiwan, home to twenty-three million people, is an island off the southern coast of China that has been governed independently from mainland China since 1949. Beijing and Taipei sharply disagree on the island’s status. The PRC asserts that there is only “one China” and that Taiwan is an inalienable part of it. Beijing says Taiwan is bound by an understanding reached in 1992 between representatives of the Chinese Communist Party (CCP) and the Kuomintang (KMT) political party then ruling Taiwan. Referred to as the 1992 Consensus, it states that there is only “one China” but allows for differing interpretations, by which both Beijing and Taipei agree that Taiwan belongs to China, while the two still disagree on which entity is China’s legitimate governing body.

Bilateral trade between China and Taiwan in 2017 reached $181.76 billion, up from $35 billion in 1999. China is Taiwan’s largest trading partner, accounting for more than 30%  of the island’s total trade. Over ninety-three thousand Taiwanese businesses have invested in the mainland since 1988, though outbound investment to the mainland declined for its third consecutive year in 2017. However, economically, Taiwan has sought to diversify its commercial partnerships to avoid outright dependence on the mainland. In addition to ECFA, Taiwan has signed a handful of other free-trade pacts, including a deal with New Zealand in 2013.

Chinese President Xi has emphasized the need for Taiwan to adhere to the “One China” principle. He referred to Taiwan’s independence forces as being “the biggest hindrance for the peaceful development of the cross-strait ties [and the] biggest threat of the cross-strait stability.”Though Taiwan’s main political parties diverge on how best to manage the island’s relationship with Beijing, experts caution that both Beijing and Taipei must both take responsibility for avoiding a crisis 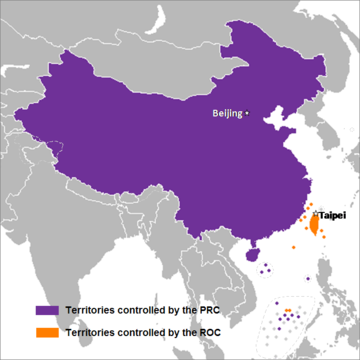 The cross-strait tunnel project that plans on linking Taiwan to Chinese mainland, if realised, could have shuttle trains whizzing through a 135 km undersea section of the tunnel at up to 250 km/h. The ambitious undertaking would also include a multi-billion-yuan engineering and technical “warm-up” project.

The ever rising political tensions between the self-ruled island and China is a major hindrance in the path of this technological progress. However, some researchers claim China will use its ‘one china’ policy to unilaterally start work on the project. Moreover, analysts say that despite the skewed political ties, surmounting the project’s technical tests would be a huge coup for China’s scientific, engineering and construction corps.

A potential thorny aspect of the scientists’ plan is that it would be necessary to create a pair of artificial islands in the middle of the strait for an air treatment station that would pipe fresh air into the tunnel.That requirement might further inflame rising tensions between Beijing and the self-ruled island.

Since Taiwan’s leader, Tsai Ing-wen, took office two years ago, China has stepped up its diplomatic and military pressure on Taiwan. Tsai’s government refuses to acknowledge that the island is part of “one China” and many islanders are not keen on reuniting with the mainland.“Starting construction without reaching an agreement with the other side will fuel anti-China sentiments on the island,” warned Zhao Jian, a Beijing Jiaotong University economics professor.

The idea of a mainland-Taiwan tunnel achieved new prominence in 2016, when Beijing included a cross-strait high-speed rail network in its then-new five-year plan.Although the five-year plan issued by Beijing two years ago envisaged the cross-strait tunnel being finished by 2030, that estimate may have been optimistic.Experts say that it would be possible to finish construction work only by mid-century, given that a pro-Beijing leader comes to power in Taiwan.

Moreover, convincing people to take the tunnel train could be challenging at first, since the Taiwanese who work or do business on the mainland mostly travel by plane. The fare of freight locomotive though an undersea tunnel is likely to be higher than the cost of shipping goods. And while the tunnel train between mainland cities and Taiwan might be faster than a boat, it still would be slower than a plane.

Analysts have criticised the plan to “warm up” for the Taiwan tunnel project by building a shorter Pingtan-Fuqing road tunnel as lacking in economic sense.

Experts are also concerned about the economic costs of this tunnel.The trade war with the United States is giving China enormous pressure from the outside , while the domestic environment faces many challenges. Thus, it is no longer possible to stimulate economic growth with large scale investment in infrastructure projects.

Our assessment is that starting work on the strait tunnel would likely be a symbolic “one-sided” move to signal Beijing's determination to achieve unification with Taiwan. We believe that barring current political and economic tensions, China will aim to build the tunnel eventually.However, we feel that the strait’s use as an international shipping route could further complicate construction.