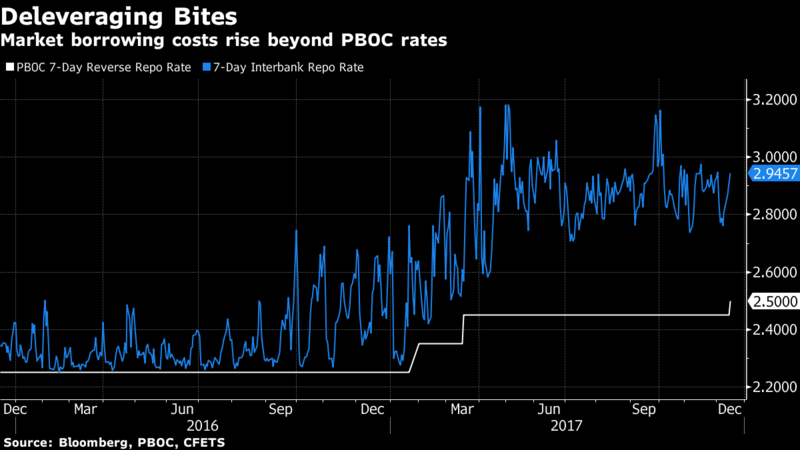 On December 2017, for the third time in the year, the US Federal Reserve raised the interest rates by 0.25%. The central bank noted that this was introduced as the US economy had made “solid gains.” Surprising financial analysts, hours later, the Central Bank of China also announced that it will be raising its interest rates. The bank has raised the seven-day reverse repurchase rate to 2.5 per cent while that for the 28-day reverse repurchase rate was increased to 2.8 per cent. China also boosted rates on another policy tool, the standing lending facility.

Raymond Yeung, chief economist, Greater China for ANZ said, “The PBoC’s rate hike offers little surprise following the US Fed rate hike overnight. The move is in line with our expectations of an uptrend in China’s policy rate, although the timing is a bit earlier and the pace is smaller than what we had expected. According to the PBoC’s press release, the hike is a response to the market uptrend and to contain leverage. We now expect the PBoC to hike rates by 35bps in total in 2018 to take the 7-day reverse repo rate to 2.85% by the end of 2018. We have been calling for a total of 40bps rate hikes by the PBoC in 2018 on the back of domestic financial deleveraging, rising inflation and steady growth.”

"This action seems to follow the Fed," said Raymond Yeung, chief greater China economist at Australia & New Zealand Banking Group Ltd. "Since it only lifted the rate by just five basis points the central bank does not want to jeopardize the market with an aggressive hike. It does indicate the tightening bias of the policy makers and this stance will continue in 2018."

The world’s second-biggest economy has defied market expectations with economic growth of 6.9 per cent in the first nine months of the year, supported by a construction boom and robust exports. China’s fixed-asset investment growth slowed to 7.2 per cent in the January-November period, while industrial output expanded at a faster pace than markets had expected.

Our assessment is that the latest rise in interest rates is perhaps due to the US Federal Reserve’s rate hike. We also feel that the government will pursue a range of policies to lower leverage and debt in the economy. We sense that the objective of the rate hike would be to bridge the gap between short term and long terms rates; to curb from using short term loans and to invest long term debt by overly adding leverage.