Less than six months after approving an €8bn fund to develop and acquire new weapons for militaries within the European Union (EU), the bloc has launched a new mechanism to finance training and equipment of non-European military forces around the world. Officially known as the European Peace Facility (EPF), this off-budget financial instrument aims to prevent conflict by supporting peace-keeping operations of international actors and increasing the operational capabilities of armed forces in partner countries. It also seeks to expand the EU’s foreign policy toolkit by supplementing all external actions that have military or defence implications under the Common Foreign and Security Policy (CFSP). 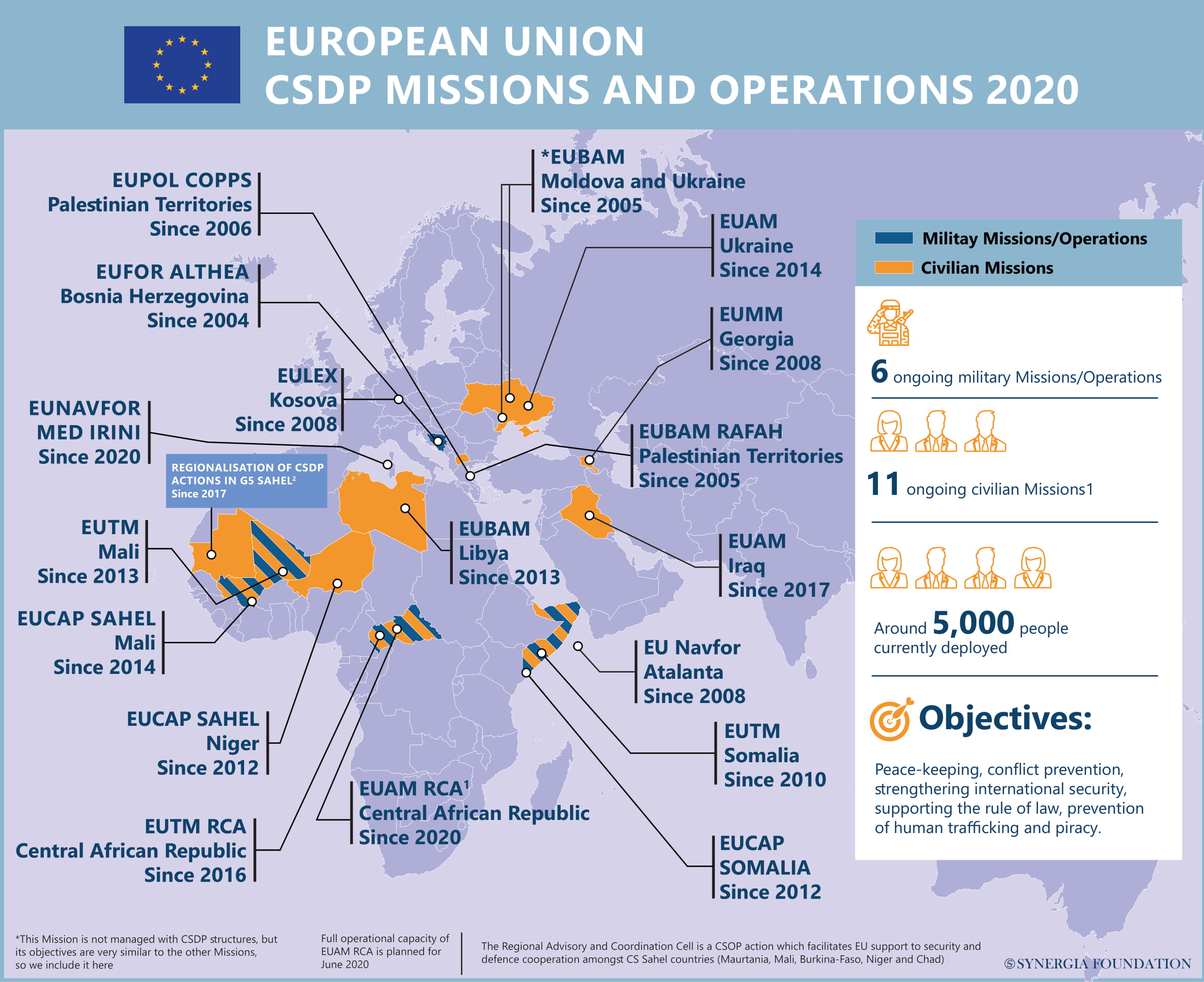 Intended to disburse around €5 billion over a period of seven years (2021-2017), the EPF will be predicated on contributions from EU member states. Any assistance measures under this scheme, at the request of third countries or international organisations, will purportedly be accompanied by risk assessments and adequate safeguards. This is particularly crucial, given that the delivery of lethal weapons has been authorised for the first time under EPF-funded missions.

For many years, Brussels has grappled with the question of framing its military engagements in conflict-affected countries. Although it is one of the largest providers of humanitarian and development aid abroad, it has refrained from supplying defence-related equipment to local partners for bolstering security in their territories.

The principal reason has been a legal restriction in Article 41(2) of the EU Treaty, which prohibits the bloc’s budget from funding expenditure that arises out of operations having military or defence implications. Reflecting a political reticence in Europe to get involved in foreign military matters, this treaty provision has institutionalised a calibrated approach to the development-security paradigm. Identifying itself as primarily a ‘civilian power’, the bloc has pushed back against proposals to equip and train foreign armed forces.

Over the years, however, there was a growing perception that this strategy had created a security vacuum, often filled in by ‘less benevolent’ actors like Russia or China. For example, in 2018, Russia had garnered substantial influence in the Central African Republic by delivering light weapons to its government, even while European efforts to support the country’s reconstruction project yielded limited gains. Citing such instances, there were increasing calls in Europe to project hard power and put real funding behind their ambitions to stabilise conflict zones.

Given the legal restraints in the financing rules, however, this could only be implemented through an off-budget instrument. This is precisely what the EPF has sought to do while adhering to core European principles. 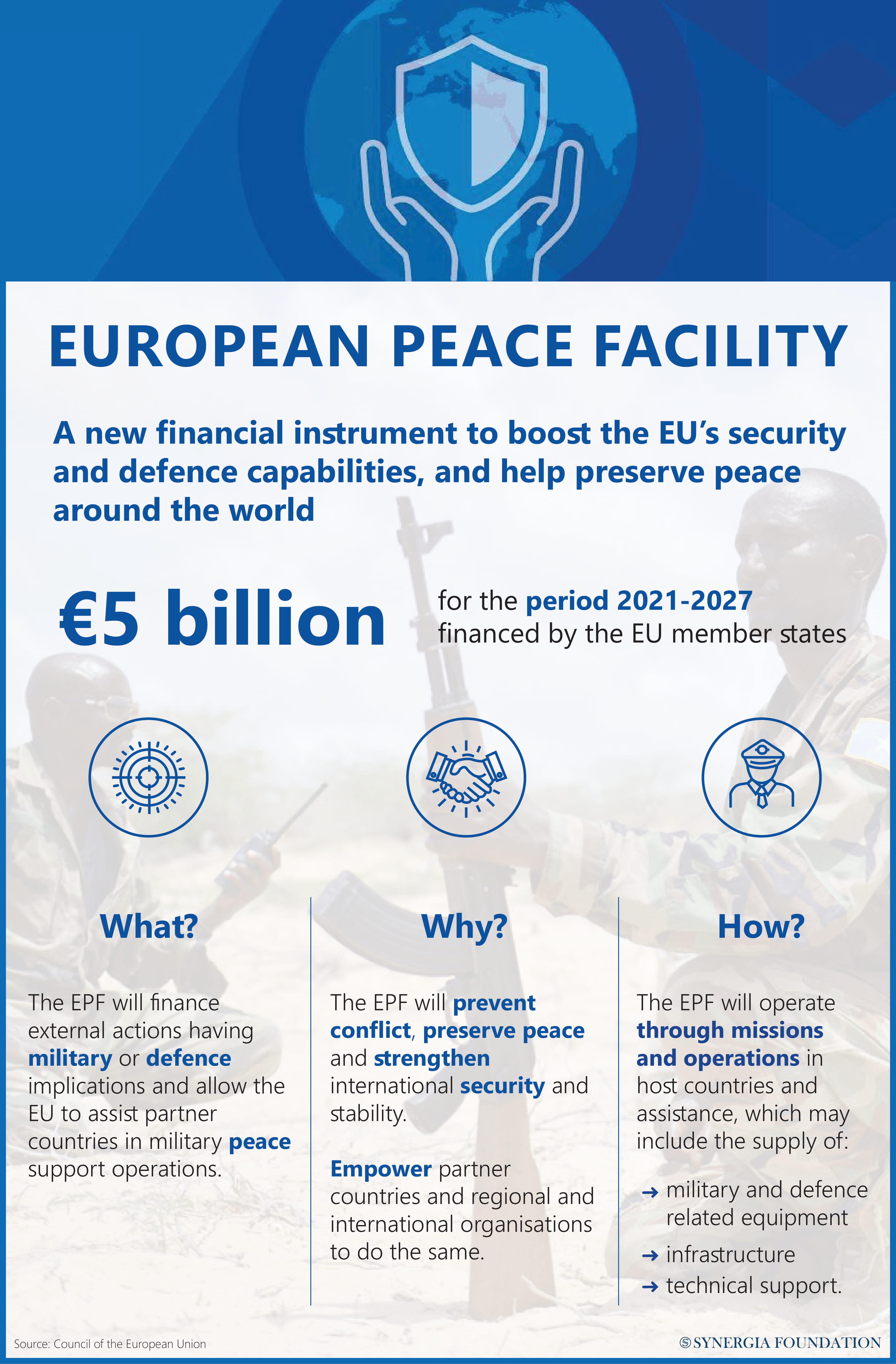 Presently the African Peace Facility (APF) is the principal financial instrument that supports cooperation with Africa and underpins the military operations of the African Union (EU). The EPF will now supersede the APF and give the EU some flexibility to finance peace operations anywhere in the world.

As evident from research papers and statements issued by European governments, the peace facility is most likely to be deployed in the Sahel region, which includes Mali, Mauritania, Burkina Faso, Chad and Niger (G5 Sahel). This is of important strategic interest, as the French military has been conducting a prolonged anti-insurgent operation against armed groups and Islamist radicals in the area. Soldiers from Germany, Italy, the United Kingdom, Czech Republic, and Estonia have also been involved in counter-terrorism training/ operations across these territories. By financing and training local forces, including the G5 Joint Force, the EU hopes to augment ongoing peace-keeping efforts and restore security in this region.

Other theatres of conflict that are being considered for capacity-building include Mozambique, Ukraine, Georgia, Moldova, Bosnia-Herzegovina as well as the Horn of Africa. There are even speculations that the EPF will support the training of the Libyan Coast Guard to tackle shared threats like piracy and terrorism.

Although the EPF has been touted as an initiative that affords more flexibility and autonomy to the EU’s security and foreign policy, it is replete with risks. Several human rights organisations have pointed out that the training and equipping of foreign security forces may escalate the conflict, as opposed to stabilising it. For example, in Libya, military forces trained by the EU were accused of engaging in trafficking, kidnapping and torture of migrants. Similarly, in Mali, officers who had been educated in programmes led by EU-member states were believed to have been involved in the August 2020 military coup.

In countries with high levels of corruption and institutional fragility, where civilian oversight or accountability mechanisms are lacking, armed interventions may not always be the right solution. There is much to be learnt from the West’s disastrous military campaigns in Afghanistan and Iraq. The possibility of weapons, including lethal equipment, being resold in the black market or illegally exported to armed militias in other countries cannot be ruled out, thereby aggravating the conflict dynamics in a region.

Acknowledging many of these legitimate concerns, the EU has introduced mechanisms like risk assessment procedures, traceability measures and post-shipment controls in order to ensure compliance with international standards. However, this methodological framework is riddled with ‘soft’ provisions. There is no binding obligation for military cooperation to be suspended or terminated in adverse circumstances. More worryingly, there is no oversight by the European Parliament, obscuring opportunities to subject the funding proposal to democratic scrutiny.

Therefore, the EPF leaves much to be desired in terms of its rationale, design, and governance, effectively impeding its utility as a sustainable peacebuilding instrument.