The value of Bitcoin has reached an all-time high. Coindesk Bitcoin Price Index has announced that the cryptocurrency reached $3,451.86 (£2,651) per coin during trade on..

The value of Bitcoin has reached an all-time high.

Bitcoin is a peer-to-peer electronic cash system. It was first created in 2008 by either an anonymous programmer or a group of programmers under a pseudonym, Satoshi Nakamoto. “Nakamoto” released Bitcoin in 2009 as an open source software. It is a decentralized electronic currency that is not controlled by any government. It is one of the most popular cryptocurrencies in the world. Litecoin, Peercoin, Namecoin and Ripple are among the other cryptocurrencies available.

Bitcoin is a community-run system. It has often been referred to as the first “start-up currency”. By the beginning of 2015, there were 100,000 merchants and vendors who accepted Bitcoins as payment. Bitcoins have been used in illegal trade online as well. Critics argue that digital cash systems are volatile and speculative in nature and comes with a number of inherent risks. 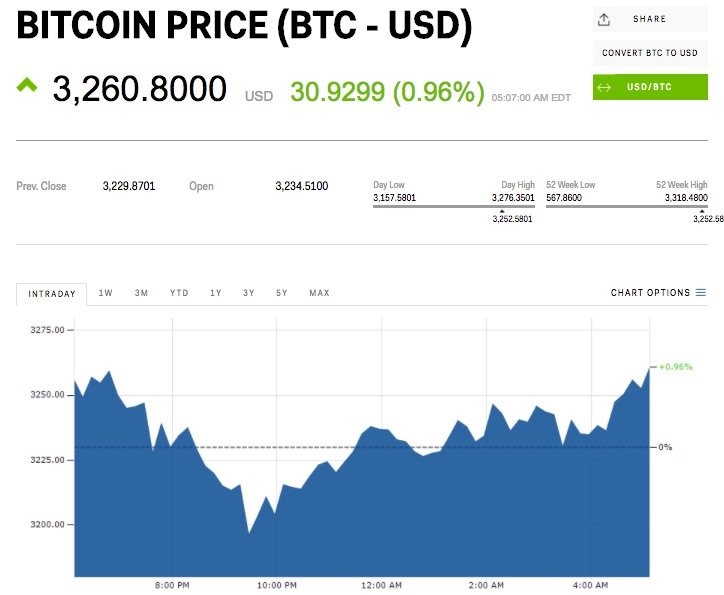 In August 2017, it was announced that Bitcoin was being split into two. When the cryptocurrency’s power brokers could not reach unify behind a single solution, Bitcoin Cash was created. This split has been referred to as a “fork.”

Due to Bitcoin’s bullish performance in the market, the value of all Bitcoins in the world is now more than $56 billion.

The new asset, Bitcoin Cash, reached a peak value of $727.54 per coin on August 2nd. However, it has been diving since. On August 7th, its price was around $271.71 per coin.  Its fortunes are likely to change as Coinbare, a leading exchange and wallet service provider, has vouched to support Bitcoin Cash.

A statement from the company noted, “Over the last several days, we’ve examined all of the relevant issues and have decided to work on adding support for bitcoin cash for Coinbase customers. We made this decision based on factors such as the security of the network, customer demand, trading volumes, and regulatory considerations.”

As for Bitcoin, it will continue performing strongly in the market, according to experts. Michael Parsons, a blockchain adviser commented, "What this has shown is that Bitcoin is much more resilient to forks than some people thought. And it appears that there is room for more than one type of Bitcoin to exist.”

Our assessment is that as more people adapt to cryptocurrencies, Bitcoin will continue being popular among merchants and vendors. However, the economics of security will provide Bitcoins a distinct advantage in the future. What is still unclear is how governments or financial institutions will be able to regulate the trade of Bitcoins.