The beginning of the end

A woman who made a rude gesture against US President Donald Trump’s motorcade has been fired from her job. There is growing resistance and criticism that has clouded..

A woman who made a rude gesture against US President Donald Trump’s motorcade has been fired from her job.

There is growing resistance and criticism that has clouded the President’s administration in 2017.

US President Donald Trump has been accused of being compliant to racism by critics in the past. He was subjected to criticism by business leaders and by fellow Republicans for failing to forcefully condemn racism in the wake the alt-right rally that took place in Charlottesville in August 2017. He has also been criticized for his executive orders calling for a travel ban on largely Muslim nations in January 2017.

Trump has been criticized for a number of his policies. He rescinded the Deferred Action for Childhood Arrivals (DACA) immigration policy that was instated by the Obama administration. As of 2017, approximately 800,000 individuals who were enrolled in the program are in danger of being deported. He has also actively pushed for repealing and replacing Obamacare with replacements that would leave millions of Americans without healthcare.

There is also an ongoing investigation probing into whether or not members of the Trump presidential campaign colluded with players from Russia during the elections. Special counsel Robert Mueller has led the team. 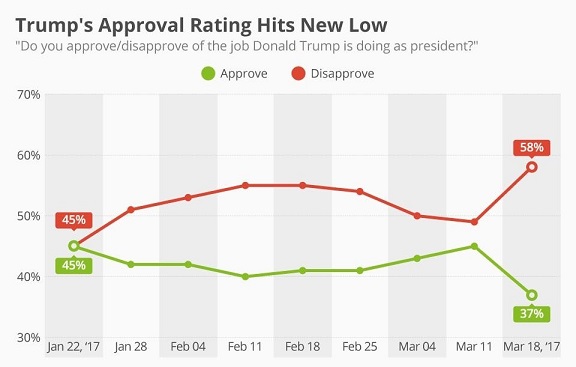 According to the most recent Washington Post-ABC News poll, 59% of Americans disapprove of Trump's handling of the Presidency. This is the worst disapproval rate that any President has gotten in America since modern polling began.  Of those who disapprove, 50% say they do so strongly. Only 37% of those polled approve of Trump's performance in office. Trump is the first president since Harry Truman to see a net-negative approval at this point in his term.

In 2017, millions of Americans have protested against the President and his policies. The Women’s March, which was held in protest of Trump’s inauguration was the largest single-day protest in U.S. history. Protests occurred across the world.

Juli Briskman, a 50-year-old, native of Virginia is not a Trump supporter. She was cycling when the Presidential motorcade went past her in October 2017. She was caught on camera making a lewd gesture against the motorcade. The photograph was from the back and did not identify her. However, she later identified herself by posting the photograph on her social media channels. Briskman, then, was fired from workplace as a result of her actions. Speaking to Huffington Post, she noted, “He was passing by and my blood just started to boil. I’m thinking, Daca recipients are getting kicked out. He pulled ads for open enrollment in Obamacare. Only one third of Puerto Rico has power. I’m thinking, he’s at the damn golf course again. I flipped off the motorcade a number of times.”

She explained that given her employer works on a contract basis with the government, they were letting her go as a result. However, she has iterated that she does not regret her actions. She said, “They said, ‘We’re separating from you,’. Basically, you cannot have lewd or obscene things in your social media.’ So they were calling flipping him off obscene. In some ways, I’m doing better than ever. I’m angry about where our country is right now. I am appalled. This was an opportunity for me to say something.”

The press photographer, Mike Smialowski, told the AFP website that it was common to see people protesting or making obscene gestures at presidents as they drove by.

Donald Trump is currently on an official visit to Asia.

Our assessment is that the many controversies surrounding Donald Trump have already begun to undermine his mandate and agenda in his office. Less than a year in power, his administration has to deal with indictments in the ongoing Russian probe and also pass a complicated tax bill which seems to have stagnated. Even within his own political party, Republican Senators like Jeff Flake and John McCain have become vocal critics. This could be the beginning of the end of the Donald Trump Presidency.