The Argentinian Central Bank increased borrowing costs by 40% earlier this month, as the Peso continued to drop in value. Argentina’s inflation stood at approximately..

The Argentinian Central Bank increased borrowing costs by 40% earlier this month, as the Peso continued to drop in value. Argentina’s inflation stood at approximately 25% throughout 2017.

Between 1998 and 2002, the country suffered a devastating recession that resulted in widespread poverty and unemployment.

Argentina is a South American nation rich in resources. It boasts a well-educated workforce and is the second largest economy in South America after Brazil. Argentina was first colonised by the Spanish in the 16th century. The country gained independence from Spain in 1810 and the first stable nationwide government was founded in 1862. The 1930s Great Depression severely affected Argentina’s agricultural output, and resulted in a series of coups that ended in the 1980s. Argentina adopted a free-market approach in the 1990s.

The 1998-2002 Argentine Great Depression caused the country’s economy to shrink by 28%. In 2001, President Adolfo Rodriguez Saa declared a default on the state’s foreign debt. A Joint Economic Committee of the United States Congress published in 2003 stated: “Three big tax increases in 2000-2001 discouraged growth, and meddling with the monetary system in mid-2001 created fear of currency devaluation. As a result, confidence in Argentina’s government finances evaporated.” The state ended the Peso’s fixed exchange rate to the US dollar, began freezing bank deposits, and converting dollar deposits and loans into Argentine pesos at unfavourable rates. In 2002, 60% of the Argentines were below the poverty line. Unemployment was at an all-time low and there were widespread protests across the country.

Argentina’s GDP growth rebounded in 2003 to grow at 8.5% annually for six years. Growth began to slow following the 2008 recession. Under Cristina Fernandez de Kirchner, who was in power from 2007 to 2015, the state was protectionist and government spending was high. President Mauricio Macri, who was elected in 2015, took steps to liberalize the Argentine economy by lifting capital controls, floating the peso, removing export controls on some commodities, cutting some energy subsidies, and reforming the country’s official statistics. In 2016, the World Bank downgraded Argentina from a high-income to upper-middle-income economy. As of 2017, the Argentinian economy was growing at 2.5%, and public debt was approximately 54% of GDP. 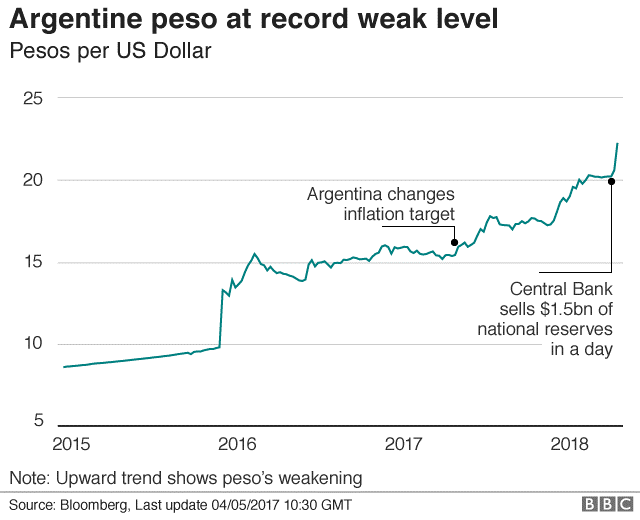 On May 4th, Argentina’s central bank raised interest rates for the third time in a week, to 40%. Meanwhile, Treasury Minister Nicolás Dujovne announced that Argentina’s budget deficit would be brought down to 2.7% this year, amending the previous target of 3.2%. “The convergence of fiscal equilibrium is not negotiable,” he said.

Commentators have noted that this move is an effort to avert an escalating crisis. The Peso has fallen 25% against the dollar over the past year. During the last week of April, it fell by more than 5% despite a $5 billion central bank intervention. A number of Emerging Market (EM) currencies were affected by the recent rate rises by the US Federal Reserve, as foreign investors moved their money to the dollar. However, the Argentinian Peso was the worst performing EM currency this year.

The Central Bank noted that it was “avoiding disruptive behaviour” in markets and “guaranteeing the disinflation process”. “As well as using interest rates, the BCRA will continue operating with all its tools for intervention in the foreign exchange markets,” it said in a statement. Inflation stood at approximately 25% throughout 2017. In December, the Bank had reduced its inflation target for 2018 from 12% to 15%, which some saw as a lapse in credibility.

“Situations of volatility [like this] shouldn’t scare us: they have to be part of learning to live with a floating exchange rate,” cabinet chief Marcos Peña said earlier this month. While the state has attempted to reassure investors, analysts have observed that unless the government takes rapids steps to address the issue, a crisis may be inevitable.

"This crisis looks set to continue unless the government steps in to reassure investors that it will take more aggressive steps to fix Argentina's economic vulnerabilities," said Latin American economist Edward Glossop. "Risks to the peso have been brewing for a while - large twin budget and current account deficits, a heavy dollar debt burden, entrenched high inflation and an overvalued currency.”

Our assessment is that while President Macri has made some attempts to reform the Argentine economy, the country still faces numerous issues. We believe that the contractionary monetary policy adopted by the state may be one step towards addressing inflation. However, ensuring a stable economy and attracting international investment would require more long term structural reforms. If the state does not step up its economic management, Argentina could be on the brink of another economic crisis.