The control over the waterway of the Mekong river could potentially jumpstart yet another conflict in South East Asia between China and the countries of ASEAN. Will Beijing founded..

The control over the waterway of the Mekong river could potentially jumpstart yet another conflict in South East Asia between China and the countries of ASEAN.

Will Beijing founded Lancang-Mekong Cooperation be the answer or will it be another conflict similar to that of the South China Sea?

The South China Sea is at the heart of a land and water dispute between China, the United States and much of Southeast Asia. China’s claim to the region is historic going back to the Xia and Han dynasties. The US has maintained that region was part of the international waters. Other countries that are disputing South China Sea include, Malaysia, Indonesia, the Philippines, and Vietnam. Vietnam has become the most vocal critic of China’s claims to the sea.

The Mekong is a trans-boundary river in Southeast Asia. It is the world's 12th-longest river and the 7th-longest in Asia. From the Tibetan Plateau the river runs through China's Yunnan Province, Myanmar, Laos, Thailand, Cambodia, and Vietnam. The Mekong River Commission (MRC) is an "...inter-governmental organisation that works directly with the governments of Cambodia, Lao PDR, Thailand, and Vietnam. In 1996 China and Myanmar became "dialogue partners" of the MRC. 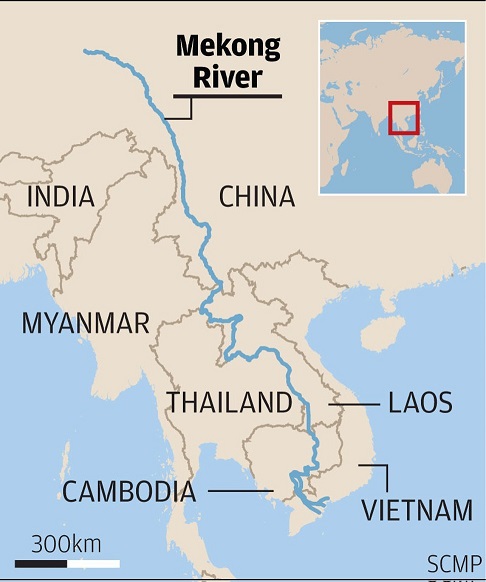 The Lancang-Mekong Cooperation was founded by Beijing in 2015. The other members of the body are Myanmar, Thailand, Laos, Cambodia and Vietnam. The members of this organization met recently to discuss a five-year development plan for the river. The proposal will be finalized on January 2018 when the members meet in Cambodia. Even though the body was set up to ensure there are cross-border disputes over development projects, environmental groups have begun sounding the alarm. This, in turn, could cause tensions similar to what’s occurring in South China Sea. Problems have already begun over environmental concerns.

According to experts, any nation that controls this river’s waterway, will control majority of South East Asia’s economy. Thus, it is possible that ASEAN and China could clash over the region and its control. Some problems could come with China not being a member of MRC. The nation had been invited but it chose to be a “dialogue partner.” Thus, it can sidestep the commission’s rule that member nations’ dam-building project proposals must be presented for discussion.

“For downstream communities, dams upstream drastically change the river’s natural flood-drought cycle and block the transport of sediment, which affects the ecosystem,” said Pianporn Deetes, Thailand Campaign Coordinator for the environmental pressure group International Rivers. “The impact on water levels and fisheries has already been recorded along the Thailand-Laos border. Chinese companies are directly investing in more than six mainstream dams on the Lower Mekong, including Don Sahong and Pak Beng in Laos,” Deetes said. “Development of these dams has not followed international good practice for considering, and avoiding or mitigating social and environmental impact,” she added.

Elliot Brennan, an independent researcher on Southeast Asia affairs, said the Mekong issue had the potential to be the largest China-Asean conflict flashpoint. He said, “After more than a decade of ham-fisted diplomacy, Beijing has finally learned how to wield both the carrot and the stick in the region. Beijing understands better than ever what Asean countries want and has far greater penetration into influencing their decision-making. If Beijing manages to achieve control of the Mekong’s development it would quickly become a crucial artery for China’s rise and exportation of influence into Asean.”

Our assessment is that vital water bodies such as Mekong river have the potential to spark conflict between nations. The Mekong waterway is vital for the economies of multiple nations and directly benefits at least 60 million people. Transparency is key factor in ensuring nations continue to co-exist. It remains to be seen if China will be able to follow through on the promise of the Lancang-Mekong Cooperation.