The value of Bitcoins continues to increase in the markets. It recently crossed $16,000 in value and continues to climb. Experts now have claimed that this has created..

The value of Bitcoins continues to increase in the markets. It recently crossed $16,000 in value and continues to climb. Experts now have claimed that this has created a bubble that will likely trigger another global financial crisis.

The subprime mortgage crisis led to a banking emergency in the United States. This resulted in the collapse of the US economy between 2007 and 2008. Economists have compared it to the Great Depression from 1929. The government through the Emergency Economic Stabilization Act of 2008, the government prepared a $700 billion stimulus to save the banks. It was the worst economic disaster since the Great Depression of 1929. Some estimates note that the financial crisis cost $15 trillion globally.

By expert estimates, global economy projecting overall economic growth and has continued to recover from the recession. IMF has projected a higher than expected growth for China, Japan and the Eurozone countries like Germany, France, Italy and Spain. Due to the strong performances expected from these nations, global growth is expected to be 3.5%.

Bitcoin is a peer-to-peer electronic cash system. It is a digital currency in which encryption techniques are used to regulate the generation of units of currency and verify the transfer of funds, operating independently of a central bank. It was first created in 2008 by either an anonymous programmer or a group of programmers under a pseudonym, Satoshi Nakamoto. 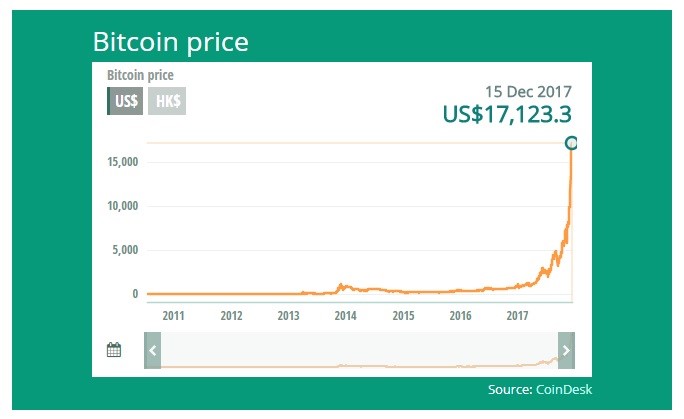 In December 2017, Bitcoin broke above the $12,000 mark in terms of its value. The cryptocurrency has continued its march higher. Due to this spike, the cryptocurrency has a total market value of about $203 billion. It is now worth more than twice Goldman Sachs' market cap.

Experts have begun sounding the alarm over the increasing value of Bitcoins. James Dimon, the Chairman, President and Chief Executive Officer of JPMorgan Chase has been critical of the Bitcoins and likened its market performance to “Tulip Mania” phenomenon that occurred in the 17th century. In Netherlands during the Dutch Golden Age, the contract prices for bulbs of the recently introduced tulip reached extraordinarily high levels. The prices then dramatically fell by February 1637 and the bubble burst.

Richard Harris, a veteran investment manager, banker, writer and broadcaster – and financial expert witness, has now voiced his concern that Bitcoins could trigger the next global financial meltdown. He writes for SCMP noting, “The next crash will not come because of some jiggery-pokery with voting rights or even accumulators; that is so last crash. This time it is likely to be around derivatives, of which the juiciest candidate is bitcoin and the other cryptocurrencies.”

The fact that Bitcoins along with other cryptocurrencies is a derivative, makes it an unknowable element in the market, he has argued. He notes, “Bitcoin is a derivative – an artificial creation based on a series of promises that one person gives to another. It is seen as an attribute that nobody knows who gives the promise; yet dangerously, everybody assumes it is there.”

Bitcoin is likely to become the biggest bubble in history. According to Birinyi Associates, that studied the previous ‘Bubbles’, Bitcoin is bigger than any of the 10 other market bubbles including the tech bubble, beanie babies, the Dow in 1929 and the silver bubble of the late 1970s.

According to Reuters, the Convoy analysts said bitcoin's prices have "gone up over 17 times this year, 64 times over the last three years and superseded that of the Dutch tulip's climb over the same time frame."

The Governor of the Reserve Bank of Australia has defined the rise of Bitcoin as “speculative mania”.

Our assessment is that Blockchain technology and cryptocurrencies are likely to be adapted as hard currency. However, the value of Bitcoins continues to rise much to the concern of financial experts. A hard break in the bubble could trigger another financial meltdown that would negatively affect the global growth that has been achieved in the past few years.