Hours after External Affairs Minister Sushma Swaraj discussed the extradition of Christian Michel, the alleged middleman in the Rs 3,600-crore AgustaWestland chopper deal, with her counterpart in the United Arab Emirates, Abdullah bin Zayed Al Nahyan and Michel was...

Hours after External Affairs Minister Sushma Swaraj discussed the extradition of Christian Michel, the alleged middleman in the Rs 3,600-crore AgustaWestland chopper deal, with her counterpart in the United Arab Emirates, Abdullah bin Zayed Al Nahyan and Michel was extradited to India.

In 1999, the Indian Air Force floated a proposal for acquisition of 12 VVIP helicopters to ferry top government functionaries. In 2010, the deal was granted to AgustaWestland for over Rs 3,600 crore. This was, however, followed by allegations that technical specifications had been tweaked, including lowering of the service ceiling of the helicopter from 6,000 m to 4,500 m, to help AgustaWestland win the bid for which bribes were allegedly paid. The CBI filed an FIR on March 14, 2013, after a preliminary inquiry. The FIR named former IAF chief S P Tyagi and 12 other individuals as accused, apart from four companies. These individuals included members of the Tyagi family and three middlemen: Michel, Carlo Gerosa and Guido Haschke. The Enforcement Directorate too began investigations under the Prevention of Money Laundering Act.

In January 2014, India cancelled a $753m controversial helicopter deal with Italian defence group Finmeccanica amid bribery allegations. The country's defence ministry said that it had terminated the agreement with Finmeccanica's Agusta Westland "on grounds of breach of a pre-contract integrity pact”. India froze payments for the 12 AW101 helicopters after Giuseppe Orsi, Finmeccanica's then-chief executive, was arrested in February on suspicion of paying bribes to secure the deal, embarrassing the New Delhi government before parliamentary elections due by May 2014.

In November 2017, the helicopter maker had sought arbitration to try to salvage the contract, a request that the Indian government had rejected. AK Anthony, India's Defence minister at the time, had said he did not believe AgustaWestland's denial that it paid bribes to swing the deal.

Christian Michel was among the alleged middlemen who had brokered the deal and who, investigators claim, paid bribes to officials and politicians to swing the contract in favour of AgustaWestland, the British arm of Italian firm Finmeccanica. An amount of Euro 42.27million was paid by the Finmeccanica Group to the firms of Christian Michel as kickbacks or bribes without undertaking any work against the receipt of such amount. 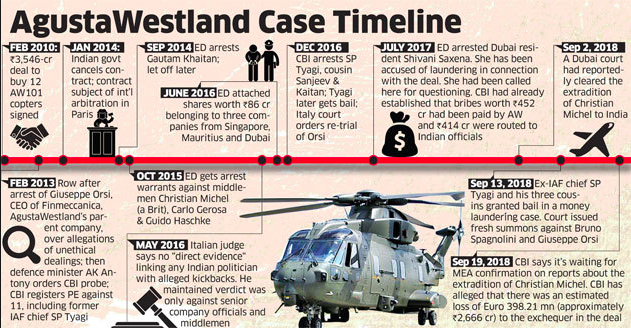 A key accused and alleged middleman in India’s abortive, scandal-tainted helicopter deal with Anglo-Italian firm Agusta Westland was extradited to India from Dubai late on 4 December, 2018. The Indian federal Police said earlier in the day that Christian Michel would arrive in New Delhi and be taken into custody by the Central Bureau of Investigation (CBI) before being presented in court on 5 December. The CBI alleges that Michel paid bribes to senior Indian government officials to secure the chopper deal for Agusta in 2010. He has denied the accusations. Michel is particularly important to the ruling Bharatiya Janata Party (BJP) as the accusations against him relate to the period when the opposition Congress party was in power .

A statement from Indian federal police said it learnt of Michel’s alleged involvement in the deal in 2012 but when it acted to investigate his role he fled the country. The CBI has alleged that Michel, who was a consultant to Agusta at the time, entered into as many as 12 contracts through two of his firms to legitimise the bribes paid to officials to secure the 556 million euro deal for the 12 AW101 helicopters. He will be examined with respect to his involvement in the case and confronted with documents recovered during raids by Swiss Authorities and received by CBI, indicating the bribes paid by him to the Indian Authorities for securing the contract for supply of VVIP Helicopters from AgustaWestland.

India cancelled the deal in 2013. A warrant for Michel’s arrest was issued in September 2015 and he was taken into custody in the United Arab Emirates in February 2017 after the CBI issued a red notice to Interpol.

The police statement said that Michel would be examined with respect to his involvement in the case and confronted with documents received by the CBI that indicate the bribes he is alleged to have paid. Formal charges will hinge on the outcome of the CBI investigation.

Our assessment is that the extradition of Christian Michel is a victory for Prime Minister Narendra Modi’s government in its fight against corruption and apprehending fugitives abroad. We believe that the timing of his arrest is also right for the BJP as it prepares for a tough fight against the Congress in elections just a few months away. We feel that Michel’s extradition could set a precedent in India’s approach to fugitive economic offenders, making it easier for the government to apprehend  Vijay Mallya, promoter of defunct Kingfisher Airlines, jewellers Mehul Choksi and his nephew Nirav Modi, who allegedly stole Rs 14,000 crore from the state-owned Punjab National Bank, among many others.