The WHO said the presence of armed groups and the broad spread of Ebola, could make vaccination "near impossible" in North Kivu. It's the 10th outbreak in Congo since Ebola was discovered. The Ebola Virus Disease (EVD) is a severe illness in humans. The approximate case fatality..

The WHO said the presence of armed groups and the broad spread of Ebola, could make vaccination "near impossible" in North Kivu. It's the 10th outbreak in Congo since Ebola was discovered.

The region that is now the DRC was first inhabited about 80,000 years ago. Bantu migration arrived in the region from Nigeria in the 7th century AD. For millennia, the DRC was part of the ancient Kingdom of Congo. The Congo was colonized by Belgium from 1908 to 1960. Initial Belgian forays into the Congo were initiated by King Leopold II. Belgium has been highly criticized for atrocities conducted during this time. Conflict and violence has played a major role in the existence of the DRC.

The country’s mineral wealth and economic resources have fuelled violence further as malicious players have tried to get their hands on the nation’s riches. Various groups have taken advantage of the anarchy to plunder natural resources. Violence is stoked by ethnic divisions.  A large UN peacekeeping force has been established in the east of the nation in order to keep the militia under control. 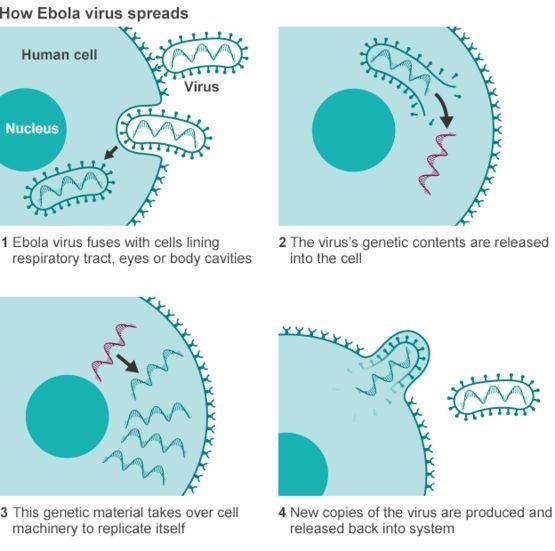 DRC’s health ministry in a statement said that Four people have tested positive for Ebola in and around Mangina, a town of about 60,000 people in North Kivu province, 100 km from the Ugandan border. The recent outbreak comes a week after a previous outbreak on the other side of the Central African country was declared over after killing 33 people. “It would appear that the risk, as we can surmise for DRC, is high. For the region it’s high given the proximity to borders, particularly Uganda,” said WHO’s emergency response chief Peter Salama.

This is DRC’s 10th outbreak since 1976, when the virus was discovered near Congo’s Ebola river in the north. That is more than twice as many epidemics as any other country. The response to Congo’s previous outbreak was considered a success despite the 33 deaths, as the use of a vaccine made by Merck helped contain the virus.

The kind of Ebola in the latest outbreak has been confirmed as the Zaire strain that the Merck vaccine protects against, Congo’s health ministry said on Thursday. This should allow health officials to again use what has become the greatest weapon against Ebola epidemics to date. However, this particular outbreak still poses new challenges. Eastern Congo being a tinderbox of conflicts over land and ethnicity could hamper efforts to contain the virus. About 1,000 civilians have been killed by armed groups and government soldiers around Beni since 2014, and the wider region of North Kivu holds over 1 million displaced people.

For ring-vaccination to be effective, health workers must reach all those potentially infected with the deadly virus. This may be difficult to do in northeastern Congo, as the WHO estimates that the outbreak could spread over tens of kilometers. Additionally, Peter Salama noted that approximately 100 armed groups operate in North Kivu and this could make ring-vaccination impossible. Instead, WHO workers might consider "a more homogenous geographical strategy", he said, where security concerns are assessed on a day-to-day-basis.

Officials in Mangina rushed on Thursday to educate people about the risks of spreading the virus in a town with no ambulance service. Agents were deployed to warn people about the need for strict hygiene and the local radio station passed on messages about what preventive measures to take in this scenario.

Our assessment is that the resurgence of the disease in North Kivu, an active conflict area that is home to more than 1 million displaced people, will present fresh challenges to the authorities. We believe that the outbreak that claimed thousands of lives three years ago was partly because of the failure to identify the nature of the problem, meaning that there was no advanced warning. We also believe that the study of lethal infectious diseases is a necessity, particularly when these diseases disproportionately affect countries in the developing world.