The S-400 Triumph, manufactured by Russia’s state-owned Almaz–Antey Corporation, is an Air Defence Weapon System. It is designed to destroy aircraft, cruise & ballistic missiles, as well as ground installations.

The S-400 Triumph, manufactured by Russia’s state-owned Almaz–Antey Corporation, is an Air Defence Weapon System. It is designed to destroy aircraft, cruise & ballistic missiles, as well as ground installations. It has an operating range of 400 Km and can engage targets even at altitudes above 30 Km. Equipped with the Nebo-M radar complex, it can autonomously monitor 300 targets, simultaneously. The equipment can spot flying objects, identify the same and monitor its progress in the air space. If a decision to engage the target is taken, it can launch missiles and provide guidance, till the target is destroyed. The S-400 is fully mobile and can be deployed in less than five minutes with a crew of three soldiers. The Economist commented about the S-400 air-defence system, ‘… one of the best air-defence systems, currently made…’.

The S-400 entered into service with the Russian Armed Forces, in 2007. It is currently deployed in the Moscow, St Petersburg and the central industrial areas. Its’ competitor, is the Patriot PAC-3, manufactured by Raytheon of the US, which entered into service with US armed forces, in 1981. The Patriot is also available with NATO allies, Germany and Spain. In all operational parameters, the S-400 outclasses the Patriot; including, target speed, operational range, altitude for engagement, simultaneous engagement of targets and mobility. Further, for comparable systems of equipment, while the S-400 costs about US$ 500 million, the Patriot could cost double, at about US$ I billion. While Belarus, China, Algeria, Turkey and India have concluded agreements to purchase the equipment, Saudi Arabia, Pakistan, Qatar Iraq, Egypt and Iran have evinced interest in procurement. 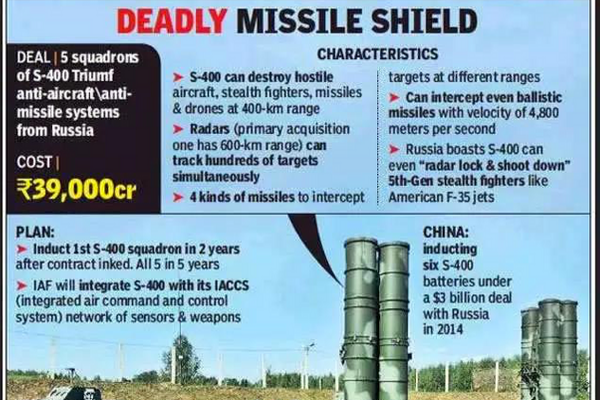 Understandably, the US is not happy with the entry of such a worthy competitor. However, they were piqued, when Turkey, the second largest army in the NATO, chose to acquire the S-400. Despite, US threats to, invoke sanctions under CAATSA (Countering American Adversaries Through Sanctions Act) and remove Turkey from the Lockheed Martin FGFA (5thGeneration Fighter Aircraft) F-35 program, PM Tayyip Erdogan has gone ahead with the procurement. In Oct, 2019, India is also likely to ink the final agreement for five S-400 regiments, at an estimated cost of US$ 5.4 billion. The delivery is expected to be completed by 2023. Perhaps, more worrying for the US and NATO, is that the S-400 is expected to have anti-stealth technology. If that is indeed true, it would seriously retard the capabilities of the current FGFA programs; namely, the US Lockheed Martin F-35 and Chinese J-20. 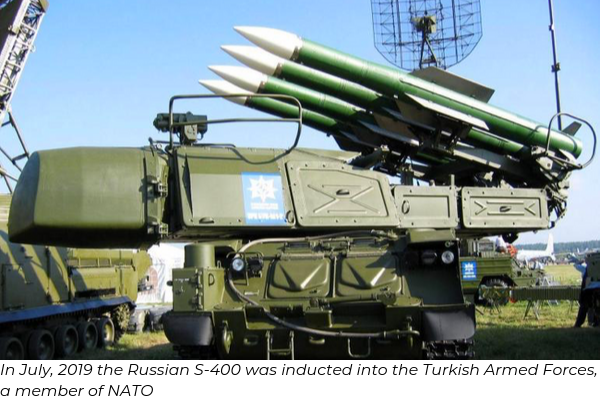 In 2017, CAATSA, was enacted as US law, after being voted by both the House of Representatives and the Senate. It was originally intended to target Russia, Iran and North Korea; but, in September 2018, the US President invoked CAATSA to impose sanctions against China, for purchase of Russian war-equipment; notably, the Su-35 multi-purpose fighter aircraft and the S-400. Thus, under US law, imposition of sanctions, for trading with Russia are mandatory; however, the President is empowered to grant waivers, to limit the impact of sanctions.

After Russia deployed S-400 regiments in Syria, it became increasingly difficult for US and Israeli pilots, to violate the Russian – Syrian no-fly zones. This has considerably strengthened the position of President Bashar Assad, in Syria. Similarly, if Turkey deploys the S-400 along its’ southern border with Syria, they would be in a better position to protect their airspace and assert their sovereignty. Saudi Arabia, despite having close relations with the US, would be more inclined toward the S-400, after the recent drone and cruise missile attack, on their ARAMCO oil refinery. If China were to deploy the S-400, in Fujian and Shandong provinces, on the mainland, they could cover both Taiwan and the Senkaku Islands, in the South China Sea. This would greatly enhance China’s capability to assert control, over the disputed territories. On the other hand, if China were to deploy the S-400 in Tibet, they could threaten airborne targets up to New Delhi, on the Indian peninsula. For India, deployment of five S-400 regiments on the Western border would provide significant leverage overall air-bases, in Pakistan, Tibet and Yunan.

In terms of technology, the S-400 is a game-changer. If indeed, stealth technology is vulnerable to the S-400 radar, it would be a major setback for costly FGFA programs, across the world, particularly to the US and China. US has already imposed sanctions under CAATSA, against China for their procurement of Russian S-400 air-defence systems. Would they extend such sanctions against Turkey and India, as well?