Nagaland is situated at a crucial junction between India and Myanmar, accentuating its importance as a border state. Despite its geostrategic importance, the state has not experienced the same amount of economic growth as the rest of the country. 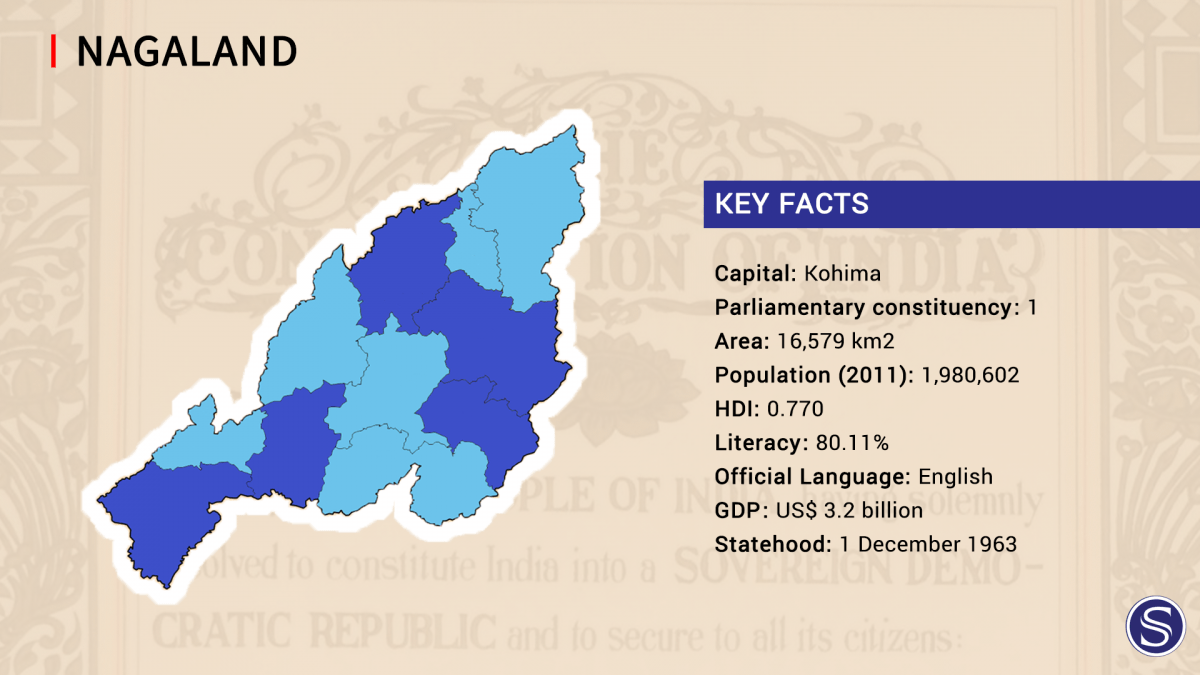 After the independence of India in 1947, the area remained a part of the province of Assam. Nationalist activities arose amongst a section of the Nagas. Phizo-led Naga National Council demanded a political union of their ancestral and native groups. The movement led to a series of violent incidents, that damaged government and civil infrastructure, attacked government officials and civilians. The union government sent the Indian Army in 1955, to restore order.

In 1957, an agreement was reached between Naga leaders and the Indian government, creating a single separate region of the Naga Hills. The Tuensang frontier was united with this single political region, Naga Hills Tuensang Area (NHTA), and it became a Union territory directly administered by the Central government with a large degree of autonomy. This was not satisfactory to the tribes, however, and agitation with violence increased across the state – including attacks on army and government institutions, banks, as well as non-payment of taxes.

In July 1960, following discussion between Prime Minister Nehru and the leaders of the Naga People Convention (NPC), a 16-point agreement was arrived at whereby the Government of India recognised the formation of Nagaland as a full-fledged state within the Union of India.

1) Economy: Agriculture is the most important economic activity and the principal crops include rice, corn, millets, pulses, tobacco, oilseeds, sugarcane, potatoes, and fibres, which covers 70% of the state's economy. Other significant economic activity includes forestry, tourism, insurance, real estate, and miscellaneous cottage industries. Most of the state's population, about 68 %, depends on rural cultivation. The state is rich in mineral resources such as coal, limestone, iron, nickel, cobalt, chromium, and marble. Nagaland has a recoverable reserve of limestone of 1,000 million tonnes plus a largely untapped resource of marble and handicraft stone.

2) Insurgency: The state has experienced insurgency, as well as inter-ethnic conflicts since the 1950s. The violence and insecurity have long limited Nagaland's economic development because it had to commit their scarce resources to law, order, and security. However, the insurgency has lost intensity, partly due to an interest in a permanent peace deal with the Government of India. Over the 5-year period of 2009 to 2013, between 0 and 11 civilians died per year in Nagaland from rebellion related activity (or less than 1 death per 100,000 people), and between 3 and 55 militants’ deaths per year in inter-factional killings (or between 0 and 3 deaths per 100,000 people).

Despite the reduction in violence, the insurgency has left its scars on the Naga society as well its economy. Tourism, which is one of the state’s highest revenue generator, was a favourite target of separatists, effectively shutting down the industry.

Our assessment is that Nagaland’s solitary Lok Sabha will not be pursued by interested coalition partners as a priority, however, the state itself houses a wealth of natural resources and a literate labour force. We believe that much like its northern neighbour Mizoram, Nagaland is situated in an increasingly vital junction between India and Myanmar and it will benefit not only the people of the state but the entire country if Nagaland were to be made a centre of widespread economic activity.