Mizoram has a highly literate population but there is no robust employment generation nor is there any sign of rapid economic development. Carved out of Assam and been subjected to violent secessionist movements, Mizoram has now settled into a harmonious society, at the crossroads of the India-Myanmar-Bangladesh trade route, but despite the prosperous trade, Mizoram has not directly benefited. So what lies in store for the Land of the Mizos before the 2019 elections? 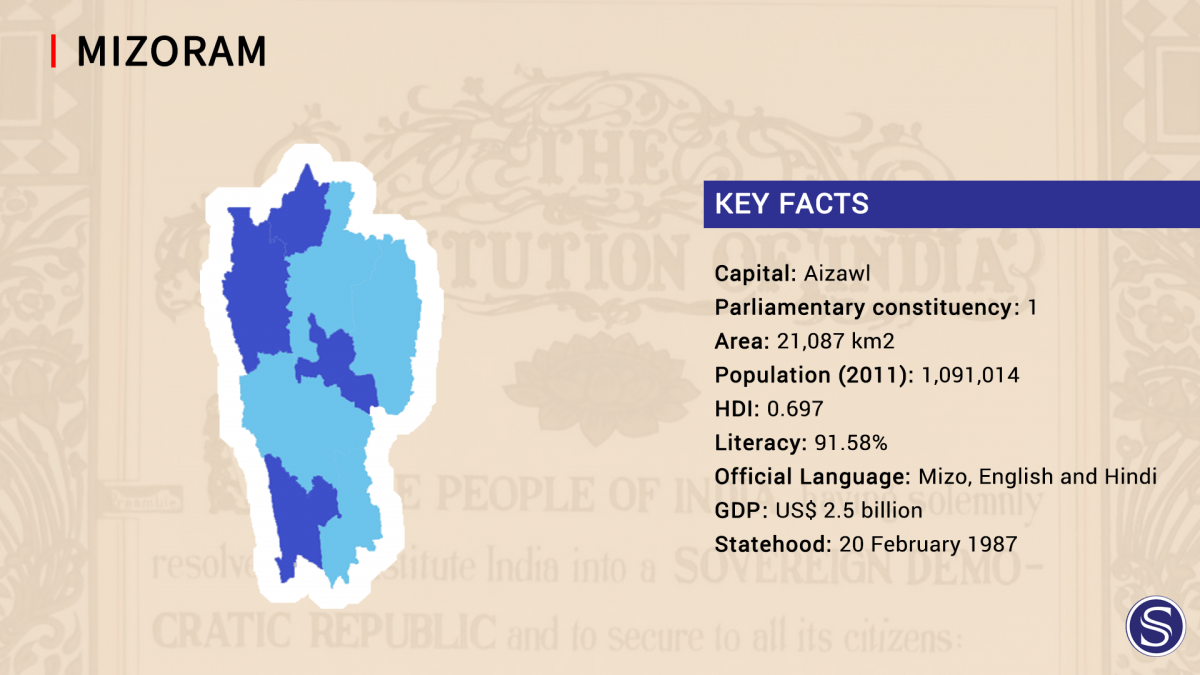 By the time India gained independence from the British Empire, the number of tribal chiefs had increased to over 200. The educated elites among the Mizos campaigned against the tribal chiefdoms under the banner of the Mizo Union. As a result of their campaign, the hereditary rights of the 259 chiefs were abolished under the Assam-Lushai District ("Acquisition of Chief's Rights") Act, 1954. Village courts were re-implemented in the Mizo region along with other parts of Assam. All of these regions were frustrated by these arrangements and by centralised Assam governance. The Mizo National Famine Front, a body formed for famine relief in 1959, later developed into a new political organisation, the Mizo National Front (MNF) in 1961. A period of protests and armed insurgency followed in the 1960s, with the MNF seeking independence from India.

In 1971, the government agreed to convert the Mizo Hills into a Union Territory, which came into being as Mizoram in 1972. Following the Mizoram Peace Accord (1986) between the Government and the MNF, Mizoram has declared a full-fledged state of India in 1987. Mizoram was given two seats in the Parliament, one each in the Lok Sabha and in the Rajya Sabha. The region has been peaceful in recent decades. Between 2006 and 2013, no more than two civilians have died each year from protest-related violence (or less than 0.2 people per 1,00,000).

1) Economy: the state’s primary concern is it's over-dependence on the ‘slash and burn’ method of ‘Jhum cultivation’ which deteriorates the quality of soil over successive generations. Between 55% to 60% of the working population of the state is annually deployed on agriculture. Agriculture has traditionally been a subsistence profession in Mizoram. It is seen as a means for generating food for one's family, ignoring its potential for commerce, growth and prosperity. Rice remains the largest crop grown in Mizoram by gross value of output. Fruits have grown to become the second largest category, followed by condiments and spices. Although the share of other sectors in the contribution to the state’s GDP has increased, a vast majority of the population still engages in low-paying, insecure agricultural jobs.

2) Energy: Mizoram is not self-sufficient in power. In 2012, the state had a demand for 107 MW of power but had an effective installed capacity of only 29.35 MW. To bridge the gap, it purchased electricity from the national grid. Of the total installed power generation capacity, all 29.35 MW came from hydel. The state also has 22.92 MW of thermal power and 0.50 MW of Diesel generating set as of March 2012. The thermal and diesel generating stations were kept on standby mode owing to their high cost of operation, and because it was cheaper to buy the power from the national grid than to operate these standby units. The hydroelectric power potential of Mizoram was assessed to be about 3600 MW in 2010, and about 4500 MW in 2012. If even half of this is realised, the state could supply all its citizens and industry with 24/7 electricity, as well as earn income by selling surplus power to the national grid.

Our assessment is that Mizoram largely literate population is a great asset to the state and the priority should be to establish job-creating industries which leverage the abundance of both natural resources as well as labour in the state. We believe that Mizoram’s importance in the India-Myanmar-Bangladesh trade route should ideally lead to an acceleration of development as and when the tri-lateral trade volumes increase over time. We also feel that Mizoram’s unique location should prompt the establishment of a major MEA presence to facilitate India’s diplomatic outreach in the region.