Meghalaya receives the country's highest rainfall yet there seems to be a drought of development. Much like how the monsoon rain brings in relief for most of the country, Meghalaya's time in the sun is coming. Energy is the sector which will open up the skies for the state, with a bountiful source of perennial rivers and a sizable uranium deposit, Meghalaya can export up-to a projected 2500 MW of electricity annually. 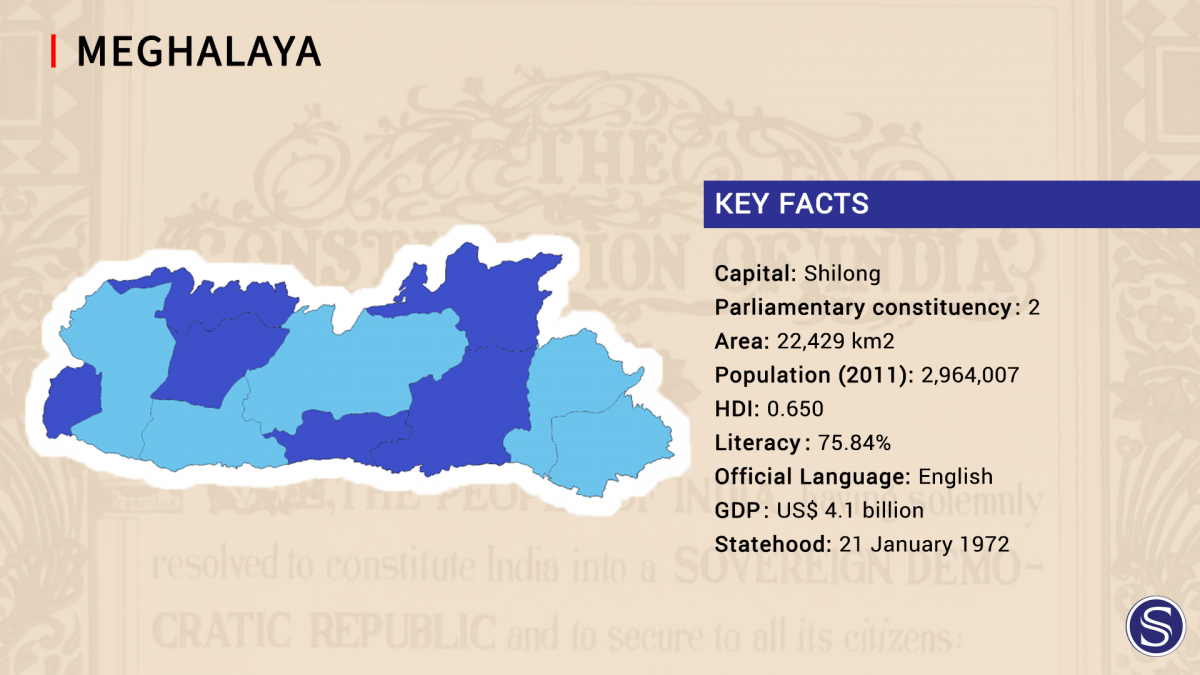 Meghalaya was formed by carving out two districts from the state of Assam: the United Khasi Hills and Jaintia Hills, and the Garo Hills on 21 January 1972. Before attaining full statehood, Meghalaya was given semi-autonomous status in 1970.

At the time of Indian independence in 1947, present-day Meghalaya constituted two districts of Assam and enjoyed limited autonomy within the state of Assam. A movement for a separate Hill State began in 1960. The Assam Reorganisation (Meghalaya) Act of 1969 accorded an autonomous status to the state of Meghalaya. The Act came into effect on 2 April 1970, and an autonomous state of Meghalaya was born out of Assam. The autonomous state had a 37-member legislature in accordance with the Sixth Schedule to the Indian constitution.

In 1971, the Parliament passed the North-Eastern Areas (Reorganization) Act, 1971, which conferred full statehood on the autonomous state of Meghalaya. Meghalaya attained statehood on 21 January 1972, with a Legislative Assembly of its own.

1)     Economy: the state of Meghalaya is mountainous, with stretches of valley and highland plateaus, and it is geologically rich. It consists mainly of Archean rock formations. These rock formations contain rich deposits of valuable minerals like coal, limestone, uranium and sillimanite. Despite its mineral wealth, the state is reliant on agriculture with a few service industry businesses for revenues. Meghalaya’s immense natural wealth enables it to sustain large scale, heavy industries which can generate long-term well-paying jobs.

2)     Energy: the state’s sizeable deposit of uranium allow it to be something no other state can claim: the energy generating powerhouse of the country. The high literacy rate, coupled with the uranium deposit and the relatively low population density (130 people/km2) makes Meghalaya the perfect candidate for a large, uranium-based nuclear reactor, possibly the biggest in the country. Presently, the state imports electricity due to a gross energy generation deficit, but this only makes the case for establishing large nuclear plants stronger.

3)     Tourism: the state is home to the wettest place on Earth, Mawsynram, which receives an annual rainfall of 11,872 millimetres (467.4 in). The town of Mawsynram itself is a well-known tourist attraction outside the country but the state government has not aggressively pushed for tourism in the state. Much like Himachal, there are fears of excessive tourism upsetting the ecological balance of the state but this is an opportunity for the state to excel in marketing its distinct honour of receiving the most amount of rainfall by employing innovative, eco-friendly methods of living for the tourists.

Our assessment is that much like the other sister-states of the North East; Meghalaya is suffering from the lack of diversified economies, overdependence on agriculture and the reluctance to invite more tourism. We believe that Meghalaya can be India’s future powerhouse in energy generation; not just hydropower but nuclear and wind energy as well. We also feel that the state has no active insurgencies and has a relatively stable government, which makes it ideal for reforming several economic sectors.