In the early hours of 03 January 2020 Major General Qasem Soleimani, the head of the Quds Force, the elite arm of the Iranian Revolutionary Guards, was killed in a US airstrike, near Baghdad International Airport. The Pentagon confirmed that the Iranian General was killed, at the direction of the US President. General Soleimani accompanied by officials from Iran-backed militias was departing from the International airport, where he had arrived earlier, from either Lebanon or Syria. As the entourage departed, two of its vehicles were struck by several missiles killing at least five people, including the General.

What was the Trigger?

The airstrike on the Iranian General comes in the wake of civilian attacks on the US Embassy, in Baghdad. The crowd which attacked the Embassy on 31 December 2019 and 01 January 2020, were enraged by US airstrikes which targeted Iran-backed militias, in Iraq. Reportedly, more than 25 people lost their lives in the US attacks. The irate crowd hurled stones at the embassy and US forces guarding the establishment, responded with tear gas.

The attack on the embassy had provoked a war of words between US President Donald Trump and Iran’s Supreme Leader Ayatollah Khamenei. Donald Trump had ominously tweeted, “…Iran will pay a heavy price (for orchestrating the attacks) …this is not a warning…”. Khamenei had responded, “…US can’t do a damn thing! Anti US sentiment is widespread…”

Who Was Major General Qasem Soleimani?

Since 1998, Qasem Soleimani has been the head of the Quds Force, in the Iranian Revolutionary Guards corps. The Quds Force is the elite division responsible for extraterritorial military and clandestine operations. As a younger man, Soleimani participated in the Iran – Iraq War (1980 – 88). In more recent years, he had gained popularity as Iran gained influence in the Middle East, extending from the Gulf of Oman, through Iraq and Syria, to Lebanon. A region of influence the General referred to as the ‘Arc of Resistance’. General Suleiman was also touted as a possible Iranian Presidential candidate.

Was the Killing of General Soleimani an Act of War?

The US and Iran have not declared war on each other, so the killing may not be labelled, as an act of war; though it is a direct affront to the Iranian state. We live in times of 4th Generation Warfare (4GW), which US author William S Lind eloquently describes, as a return to pre-modern and decentralized forms of warfare. In 4GW the lines between war & politics, as well as the distinction between combatants & civilians, is deliberately blurred. More importantly, states lose their monopoly on combat forces, with non-state actors, militias and proxies also openly asserting combat power. This is very much the state of affairs, in Iraq and Syria, today.

Interestingly, from 2014, the US and Iran collaborated to oust the ISIS, from Iraq and Syria. But now that the ISIS threat has been virtually eliminated, their traditional rivalry has returned to the battlefield. The US suspects Iran’s hand, in organizing demonstrations of public ire against US forces and establishments, in Iraq. Though Iran denies having any role, ‘plausible deniability’, is also established statecraft, particularly when dealing with more powerful nations. Thus, by using 4GW with plausible deniability, Iran could seriously undermine US interests in Iraq. Notwithstanding Iran’s denial, how can more powerful nations like the US, counter 4GW perpetrated by non-state actors or proxies?

The US may believe that by killing General Suleiman, they have eliminated a primary source of anti-US sentiment, in Iraq. Whether the US succeeds in improving its popularity, remains to be seen. However, the new strategy to counter 4GW appears to be to personalize the conflict and eliminate the source of the problem. Seen against the backdrop that the machines of 3rd Generation Warfare (3GW), such as aircraft carriers, battle tanks and fighter aircraft are largely useless in 4GW, the new paradigm of personalizing conflict could yield better results.

The Iranian Republican Guard Corps (IRGC) is a branch of the Iranian Armed forces, founded after the Iranian Revolution, in 1979. According to the Iranian Constitution, while the Iranian Army defends Iran’s borders and maintains internal order, the IRGC is tasked to protect the country’s Islamic Republic Political system. The IRGC has approximately 1,25,000 military personnel including ground, aerospace and naval forces. On the same day as the assassination, Brigadier General Esmaeil Qaani, General Soleimani’s second-in-command, was elevated as the new Quds Force commander.

Succession planning is inherent in the structure of all military organizations. The IRGC and the Quds Force have adequate personnel and experience, to find a replacement for Major General Qasem Soleimani. Though General Soleimani was experienced and popular, Brigadier Esmaeil can also be expected to be effective, within a short period of time.

How is Iran Likely to Respond?

The political leadership in Iran will be constrained to respond to this provocation, quickly. Major General Qasem Soleimani was a popular leader and Iranian national sentiment has been be hurt. Further, General Soleimani shared a close warm and personal relationship with the Supreme Leader, Ayatollah Khamenei; who often spoke of the General in glowing terms. Also killed in the attack, was Abu Mahdi al-Muhandis head of the Kataib Hezbollah, an Iran-backed militia. Pressurized by their allies for revenge, both Ayatollah Khamenei and President Hassan Rouhani have publicly promised a harsh response.

Iran’s conventional forces are weak and to advance their interests abroad, Iran continuously works extensively with militias, terror groups and other proxies, in the Middle East. The IRGC normally takes lead in such activities and with the assassination of their commander, (they) have exemplary motivation to demonstrate their skills. Thus, while a conventional response is certainly unlikely, Iran can be expected to sub-conventionally attack US interests in multiple theatres, to include Iraq, Yemen, Lebanon, Syria and the Persian Gulf. 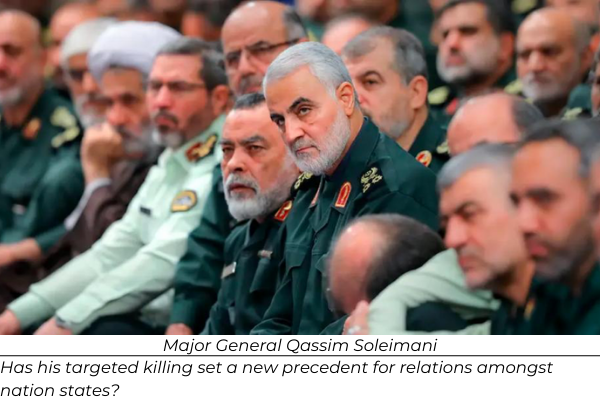 Has a New Precedent been Set?

Targeted killing of a foreign government servant, without the declaration of war, is a new precedent for the US. While the act is a clear violation of Article 2(4) of the UN Charter, the current US administration has a reputation for showing little respect to the world body.

On 14 September 2019, ARAMCO oil refineries at Abqaiq and Khurais, Saudi Arabia were attacked by a swarm of drones and cruise missiles. The attack crippled the kingdom’s oil production by more than 50%. Though Houthi rebels from Yemen claimed responsibility for the attack, the US discounted the claim and blamed Iran for the same. Unlike other weapons of war, drone attacks and cruise missile are relatively cheap and can be easily acquired and operated by non-state actors. While the US has claimed responsibility for the targeted killing of Major General Qassem Soleimani, Iran’s response could very well manifest as targeted killings of American officials, by non-state actors.

Information and communications can no longer be confined between national borders. Similarly, international borders have become increasingly porous to goods, currencies and people movements. By carrying out the targeted killing of a government servant belonging to a sovereign nation, the US has diluted the concept, even further. While UN-designated terrorists should hopefully beware of open skies, even government servants of sovereign nations, unfortunately, need to be more cautious now. 4GW has indeed evolved, it has just got personalized.