Hong Kong: Where is the violence leading to?

On 02 October 2019, in a clash with civilian protesters, a Hong Kong police officer shot an 18-year old secondary school student. The trigger for Hong Kong protests commenced on 29 March 2019, when a bill was introduced in the Hong Kong Legislative Council.

On 02 October 2019, in a clash with civilian protesters, a Hong Kong police officer shot an 18-year old secondary school student. The student was shot from point-blank range, while he attacked the police officer with a metal rod. The police claim it was an act of self-defence and fortunately, the student survived; but, the incident served to aggravate the already volatile police-civil confrontation, Hong Kong has been witnessing, since June 2019. 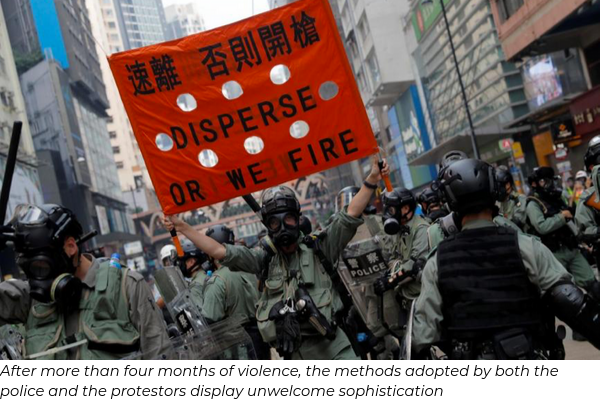 The trigger for Hong Kong protests commenced on 29 March 2019, when a bill was introduced in the Hong Kong Legislative Council. Called the Extradition Law Amendment Bill (ELAB – 2019), if enacted into law, would have empowered local authorities to detain and extradite criminal fugitives, wanted in other territories; including, mainland China and Taiwan. By May 2019, the protests had become increasingly popular and violent. On 15 June 2019, Ms Carrie Lam, the Chief Executive of Hong Kong, suspended the bill and on 09 July 2019, she even declared the bill, ‘dead’.

However, none of these conciliatory measures seemed to pacify the irate protesters. The protests have in fact become more violent, with protestors personally targeting policemen and hurling petrol bombs. In response, the police have used tear gas, rubber bullets and water cannons. The police have also attempted to identify ring leaders by use of surveillance drones and the protestors have creatively used umbrellas and face masks, to conceal their identity. The original cause for the protests seems to have been forgotten and instead deteriorated to open conflict, between violent civilians and restrained policemen.

Hong Kong Island became a British Colony, after the Treaty of Nanking, 1842 that was concluded after the 1stOpium War. After the 2ndOpium War, the Convention of Peking, 1860 was concluded; involving the Chinese Qing Dynasty, British, French and Russian empires. The convention is regarded, in China, as an unequal treaty and British control were further extended to include the Kowloon Peninsula. In 1898, Britain under Queen Victoria legitimized the acquisition and expanded control over the New Territories, by the signing of the 99-year lease with the Qing ruler. Thus, the lease had to expire on 01 July 1997.

Originally a sparsely populated area of farming and fishing villages, Hong Kong has prospered, under more than 150 years of British rule. It has emerged as a major metropolis, one of the world’s most significant, financial centres and commercial ports. Today, with an area of 1,104 square kilometres and a population of 7.4 million it is one of the most densely populated and economically independent regions of the world. It ranks 7thon the UN Human Development Index and has the largest number of skyscrapers, in the world. 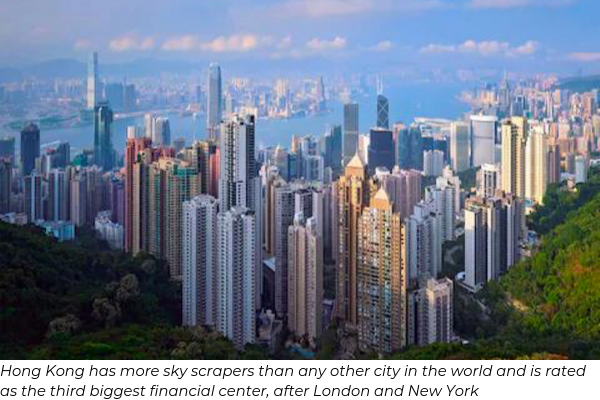 In the 1970s and 80s, as the date for the lease to expire approached, there was considerable anxiety amongst the people of Hong Kong, China and Britain, about the impending transfer of power. In 1984, British PM Margret Thatcher and Chinese Premier Zhao Ziyang signed the Sino-British Joint Declaration. Under the terms of the declaration, Britain publicly committed to returning the colony to the Peoples Republic of China (PRC), when the lease expired. PRC also agreed that for a period of 50 years, Hong Kong would remain a Special Administrative Region (SAR) of the PRC. Hong Kong was to enjoy a high degree of autonomy, in areas other than defence and foreign affairs. Hong Kong was also to remain a free port with a separate customs entity. Hong Kong citizens could continue to practice capitalism and political freedoms, otherwise forbidden in mainland China.

Under Basic Law, Hong Kong SAR enjoys executive, legislative and judicial powers, including that of final adjudication. This underscores the constitutional principle of, ‘One Country – Two Systems’, formulated by Deng Xiaoping while negotiating the Sino-British Joint Declaration. Interestingly, Hong Kong hosts the largest concentration of high net-worth individuals of any city in the world.

Analysis of the Current Confrontation

Prior to the transfer of power, in 1997, the Constitution of Hong Kong, called Basic Law was drafted. Basic Law came into effect on 01 July 1997, with the transfer of Hong Kong’s sovereignty, from the UK to the PRC. Basic Law sets out the sources of law, the relationship between the SAR and the Central Government of China, fundamental rights & freedoms and the structure & functions of local government. In April 1990, Hong Kong Basic Law was also adopted by China’s National People’s Congress and signed by President Yang Shangkun.

Hong Kong Legislative Council comprises 70 members; 35 directly-elected from five geographic constituencies and the balance 35 indirectly-elected, through trade-based functional constituencies. The Chief Executive is the head of the Government of Hong Kong and was created to replace the erstwhile British-appointed Governor. The Chief Executive is appointed by the Central People’s Government, after an indirect election by a 1200-member Hong-Kong based electoral college.

Article 68 of Hong Kong Basic Law states the ultimate aim is the election of all members of the Legislative Council, by the universal franchise. However, this aspiration has been left unfulfilled and remains a bone of contention. However, it is challenging to see the PRC, which has consolidated authoritarianism under President Xi Jinping, the yield on this issue. 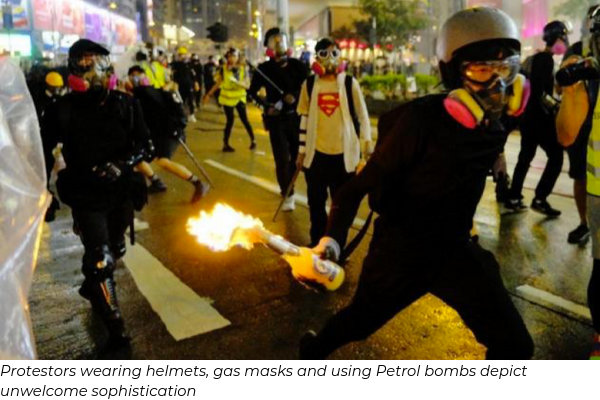 Perception of the PRC

The violent confrontations between the public and the police have moved beyond the original trigger, ELAB-2019; which, has already been withdrawn from the Legislative Council. For the protestors, the demands have escalated to democratic reform and election by the universal franchise for all members of the Legislative Council, including the Chief Executive. However, the central leadership of the PRC is likely to perceive the crisis, as more of an economic issue than a political one. In 1997, when the transfer of power took place, Hong Kong contributed a significant 18% of China’s GDP. In 2018, that contribution has scaled down to a mere 2.7%. Stagnant incomes and rising rents are fundamental causes for unhappiness, amongst the youth of Hong Kong. The PRC has also repeatedly accused foreign powers of stoking the civil unrest, in Hong Kong. In the eventuality, the protests go out of hand, the central leadership have already amassed para-military forces in Shenzhen, to assist the beleaguered Hong Kong police.

“Economic development is the only golden key to resolving all sorts of problems facing Hong Kong, today.” 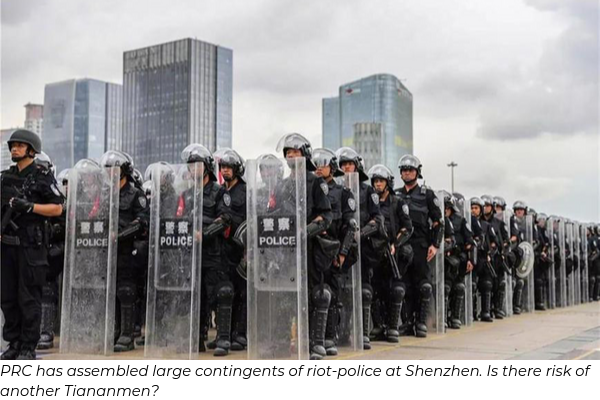 In 2018, the National People’s Congress formally removed the term limits for Presidents of the PRC. Thus, President Xi Jinping has become the de-facto President for life. Surprisingly, there was a little protest in China against this authoritarian move. In China, President Xi is perceived as a popular leader; credited with removing corruption within the Communist Party and improving China’s stature towards becoming a superpower. Thus, Hong Kong’s quest for more democracy in the midst of a deteriorating economy contrasts starkly with the aspirations of mainland China, where the preference is for an authoritarian but efficient government. If there is substance in the accusation of external assistance stoking the violence, it is ill-timed and unfortunate. The riots have certainly placed the spotlight on Carrie Lam and the beleaguered Hong Kong police but it is the people of Hong Kong, who will suffer the most.