Himachal's fragile ecology has been impacted by the surge in tourists visiting Shimla in peak Summer months. As a result, Shimla's rapid and unplanned urbanization is straining the state's natural resources leading to irreversible damage. Himachal's low population, high education levels and limited urbanization make it a perfect candidate for the government to test innovative renewable energy generation methods, especially related to solar and hydropower. 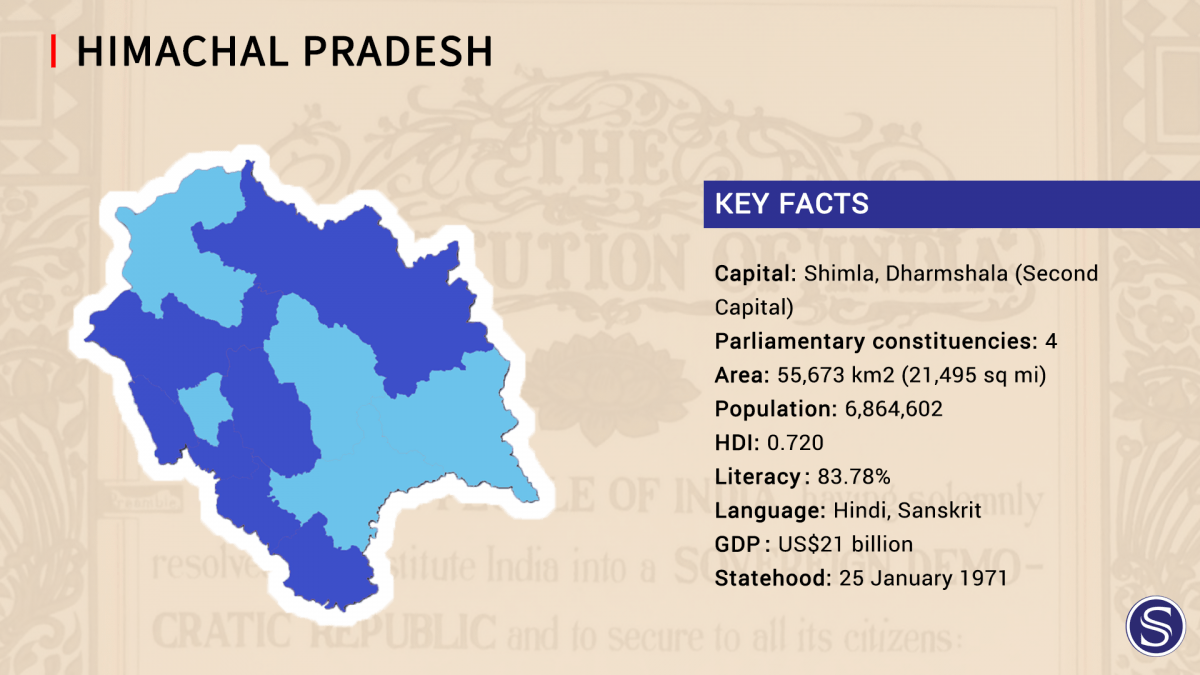 Himachal became a Part 'C' state on 26 January 1950 with the implementation of the Constitution of India and the Lieutenant Governor was appointed. The Legislative Assembly was elected in 1952. Himachal Pradesh became a union territory on 1 November 1956. Some areas of Punjab State— namely Simla, Kangra, Kullu and Lahul and Spiti Districts were merged with Himachal Pradesh on 1 November 1966 on the enactment by Parliament of Punjab Reorganisation Act, 1966. On 18 December 1970, the State of Himachal Pradesh Act was passed by Parliament, and the new state came into being on 25 January 1971. Himachal became the 18th state of the Indian Union with Dr. Yashwant Singh Parmar as its first chief minister.

1)     Environmental Protection: Himachal Pradesh is one of the states that lies in the Indian Himalayan Region (IHR), one of the richest reservoirs of biological diversity in the world. There has been a steady regression of environmental regulations over the past five years, favouring large scale deforestation for industrial activities. HP’s priority should be the conservation of its pristine ecology. Hydropower projects pose a threat to HP’s vast freshwater river systems.

2)     Economy: HP ranks second in the country in key HDI indicators but its economy is reliant on tourism and raw materials. Despite its need for reforms, H.P cannot open up its protected areas for economic development. Instead, H.P could lead the country in renewable energy generation, as it receives ample sunlight all year and is sparsely populated which allows for large scale wind farms.

Our assessment is that Himachal Pradesh has been the silent performer in most crucial HDI indicators, and it now requires crucial sectorial reforms to help it adjust to the advancing Indian economy. We believe that the state’s priority has to be promoting sustainable methods of energy generation and the green economy. We feel that H.P’s experience with hydropower, abundant sunlight and scattered population makes it one of the most suitable states in the country to build, test and deploy green technology.