On Saturday 14 Sep 2019, in a pre-dawn strike, Saudi Arabia’s large ARAMCO oil refineries at Abqaiq and Khurais were attacked. The precision attacks crippled the kingdom’s oil production capacity by 50% (5.7 million barrels); and, amidst the alarm, the price of crude soared, to almost US$ 72 to a barrel. Houthi rebels of Yemen claimed responsibility for the attack; stating, it was retribution for the Saudi Arabia’s 5-year air campaign, being carried out in Yemen. The attack was apparently carried out by drones and cruise missiles that successfully evaded the Saudi Arabian Air Defence (AD) systems. Saudi Arabia AD systems are based on US equipment and include the Raytheon Patriot PAC-2 SAM system. Apparently, the 18 triangular-shaped drones and 11 cruise missiles, used in the attack, by flying nap of the earth, produced almost undetectable radar signatures, rendering the expensive AD system, quite useless. 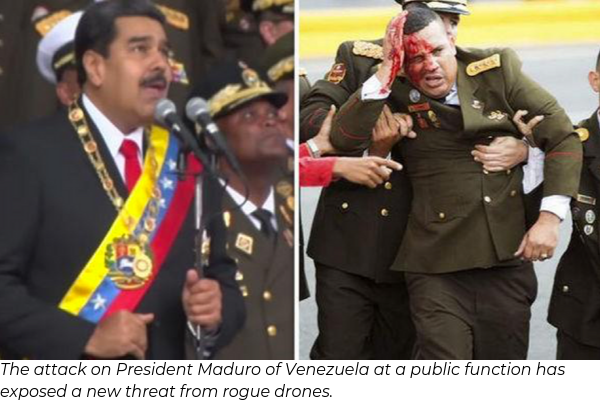 This was not the first time that drones were used, to carry out brazen attacks, on unsuspecting targets. On 04 Aug 2018, two drones carrying explosives exploded near President Nicolas Maduro, while he was reviewing a national parade, at Caracas, Venezuela. While the President emerged unhurt, several others were injured. Of closer concern, is a recent report by Punjab Police, that the Pakistan-based terrorist outfit, Khalistan Zindabad Force (KZF), were using drones to smuggle weapons into India. In Sep 2019, Punjab Police arrested four suspects from Taran Taran district and extracted confessions, admitting to the use of drones for carrying weapons, ammunition, grenades, counterfeit currency and narcotics. While the modus operandi of using drones is still being investigated, the CM of Punjab, Captain Amrinder Singh has appealed to the Central Government, to deal with the new menace, on an emergency basis. 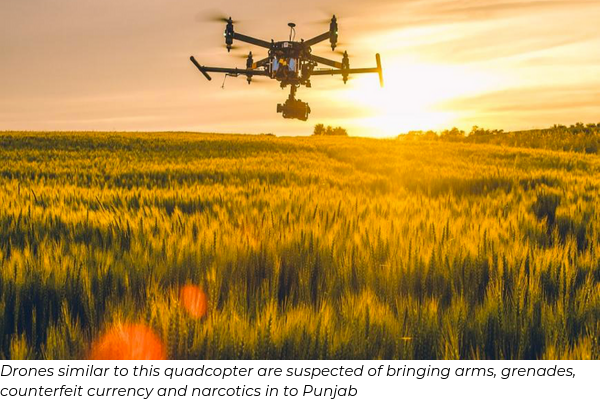 Initially, commercial drones were used primarily for surveillance and photography. Therefore, they normally took the shape of quadcopters with payloads of approximately two Kgs and loiter times of about 40 minutes. However, commercial drones have evolved; Griff Aviation, Norway has developed the Griff-300, as a professional load-carrier. It is designed as an eight-propeller UAV that can sustain 226 Kgs, for a loiter time of 45 minutes. Some commercial drones that can even be purchased on Amazon are listed in the table below, with specifications.

The impressive capabilities of commercial drones underscore the potential military-grade drones can unleash. The attack on ARAMCO refineries in Saudi Arabia demonstrated that a swarm of drones and cruise missiles could evade modern AD systems and carryout precision destruction of targets, more than a thousand kilometres, from the base of the attack. The potential of the technology is also apparent to militant groups in Pakistan, Somalia, Yemen and Libya, who engage in, cross-border terrorist activity. It will also be a windfall for Hamas in Gaza Strip, Hezbollah in Lebanon, Houthi rebels in Yemen and the Kurdish Peshmerga, who engage in sub-conventional conflicts, with other state forces. The technology marks the advent of a new dimension in sub-conventional warfare that has the potential, to undermine efforts of security forces, around the world.

In 2017, the BBC reported that the US Army had to use a Patriot Anti-tank missile, to take down a quadcopter drone. The Patriot missile cost US$ 3 million; while, the quadcopter cost barely US$ 200. 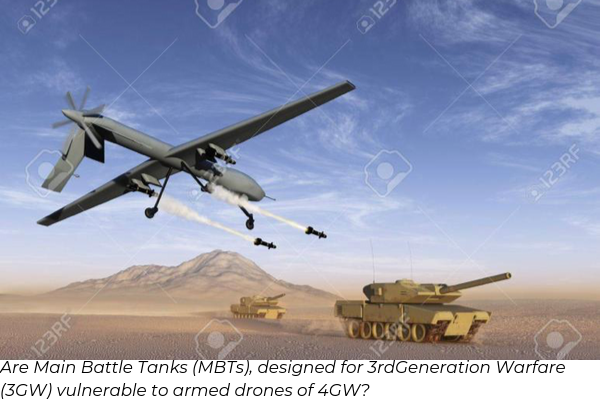 In Dec 2018, DGCA (Directorate General of Civil Aviation) issued new instructions (Drone Regulations 1.0) to regulated utilization of drones in non-controlled airspaces. Accordingly, UAVs above 250 grams in weight or which fly above 50 feet are required to be registered and regulated through the on-line platform called, ‘Digital Sky’. They have also introduced on-line software called NPNT (No Permission No Takeoff), to control usage of airspaces.

While regulations have been formulated, it is suspect the government has the capacity to enforce the new regulations. Security Forces, both military and police urgently need to acquire capacities to protect airspaces from drone-attacks. Conventional AD systems may be inadequate to meet this threat, as was seen during the ARAMCO attack. In the absence of global off-the-shelf solutions, we would do well to apply national R&D resources, to create anti-drone systems, capable of shooting or bring down rogue drones.

The advent of drones has provided the non-state actor, with a new weapon, with which to challenge the might of the state. For the soldier, guarding the border from a field fortification has become perilous; because, even on a dark night, an enemy UAV with night flying capabilities can designate the field fortification from close proximity, for a laser-guided missile, fired from afar. The same threat can be extrapolated for our naval assets lying in harbour and our Air Force assets located in bases. Similarly, all national installations of value are now vulnerable to a new kind of threat; with the help of even commercial UAVs, terrorists can designate targets, and guide heavier munitions to the target, with precision accuracy. The new technology can also be used to assassinate persons of high risk, for which no counter appears to be currently available. From a national security point of view, we urgently need to create systems, capable of downing the rogue UAV.