Sinification of the Emerald Island

While many Sri Lankans may have celebrated the passing of a controversial legislation on May 20th, virtually granting China suzerainty over the Hambantota Port and the new concept Colombo port city, critics warn of a creeping ‘colonisation’. In 2018, when the $1.5 billion deal was signed, the then Sri Lankan Prime Minister Ranil Wickremesinghe had famously said, “There is no question of security problem. The Indian security issues have been addressed by us. There will be further discussions with India.” So far, there has been a studied silence from its neighbour across the Palk Straits.

The Colombo Port City Economic Commission Bill (CPCEC) sanctions 296 hectares of land reclaimed from the Indian Ocean as Sri Lanka’s first special economic zone (SEZ) for service-oriented industries to Chinese companies. There were widespread protests, with 19 petitions filed on the ground of being ‘unconstitutional’. The Supreme court observed that certain sections were indeed so and passed it only once the government had incorporated its recommended amendments. The opposition claims that the construction of this futuristic city, primarily funded by China, would threaten the sovereignty of Sri Lanka.

Furthermore, the governing body selected for the Colombo Port City will be directly under the jurisdiction of the President, who could put Chinese nationals or companies on the board. This gives China a direct say in the governing and functioning of the SEZ. The argument is that there is an imminent risk of the creation of a ‘Chinese colony’ on Sri Lankan shores. The ruling Rajapaksa-led gover- nment, however, has tried to dispel these notions by harping upon the economic benefits it would accrue. Sri Lanka will be the next financial hub, rivalling Dubai and Hong Kong, as most local laws related to registration grants, licenses, authorisations, and other approvals needed for businesses will either be relaxed or exempt in the SEZ. It will also be a haven for foreign direct investments (FDI) with sweeping tax breaks and tax-free salaries. The public has been promised 200,000 jobs in the first five years with salaries in foreign currency, akin to working overseas.

For the last few years, the historical linkages based on Buddhism have been called upon to emphasise closer Sino-Sri Lankan ties. This was underlined by the construction of the iconic Lotus Tower, the tallest structure in South Asia, funded by Beijing. China-Sri Lanka relations have always been more about trade, commerce, and economy than military cooperation. The Hambantota Port is a testimony to that relationship. The port was built with loans taken from Chinese banks, which the Sri Lankan government is still paying off. In 2017, the port was given on a 99-year-long lease to China for $1.12 billion dollars. Theoretically, even though China has a 70 per cent stake, the port remains under the Sri Lankan government with respect to its security and military potential. Sri Lanka’s strategic location at the junction of vital sea lanes of communications in the Indian Ocean needs no emphasis.

To make the ambitious BRI (Belt and Road Initiative) a success, the trade belt through the Indian Ocean and Central Asia is critical. The choke point of the Malacca Straits, under the naval scrutiny of India (and by extension the Quad), is a vulnerability that Beijing is extremely nervous about. 80 per cent of China’s energy supply pass through these narrow straits. The Colombo Port City Project and the China-Pakistan Economic Corridor (CPEC) aim to find alternatives to the Malacca route. Another gain is that over the years, China has developed a massive capacity in its construction industry. With projects now on the wane Similarly, the loans taken by the within mainland China, this surplus Sri Lankan government are from capacity must find a profitable outlet Chinese owned banks like Exim, elsewhere. All civil engineering works while the Hambantota lease is in the Port City project have been managed by the China Merchants handled by Chinese companies. Port Holdings company. In short, all material, equipment, and technology are bought from China itself, thus channelising profits into its domestic economy.

Sri Lanka’s external sector has been facing a fiscal consolidation crisis for the longest time. The trade deficit, as well as the budget deficit, has made Sri Lanka dependant on long term/short term loans to keep reviving its foreign revenue reserves. The country is trapped in a vicious debt cycle wherein a low level of FDIs, and low revenue from exports and remittances, lead to difficulty in paying back loans, leading to more loans at even higher interest rates. The government is in a bind now to find a way out of the cycle, and the Chinese investments appear timely and most welcome. Last year in March, China provided a concessionary loan of$500 million for COVID-19 relief. 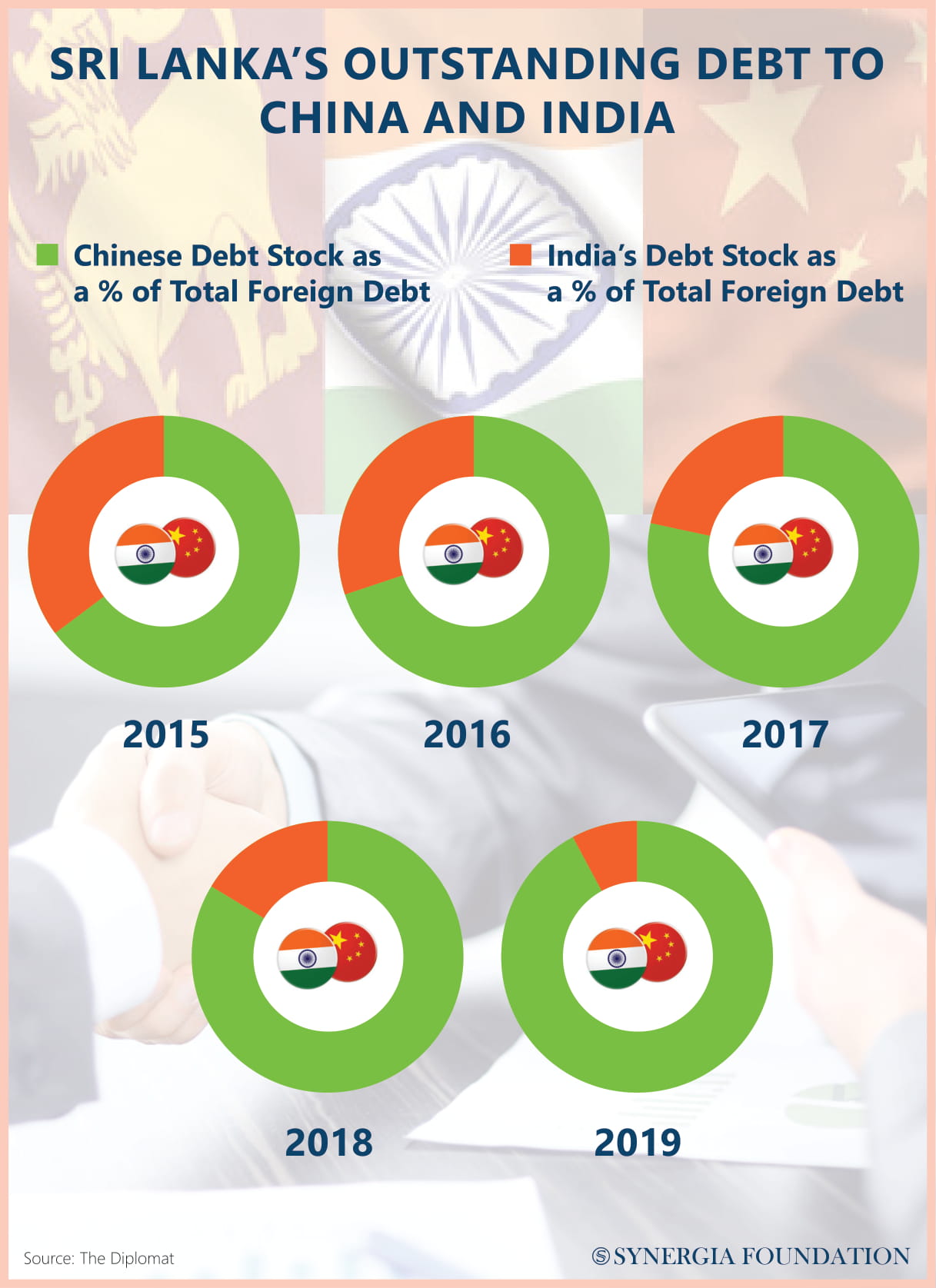 Shortly thereafter, in May, Sri Lankan officials approved a loan of $80 million from China to improve road infrastructure. China then pledged another $90 million grant for medical care, education, and water supplies, soon after Yang Jiechi’s (high ranking Chinese diplomat) visit in October 2020. Chinese loans come with a no- strings-attached approach, making them that much more attractive. The loans can be paid in long term instalments, and the only additional requirement China posits is to procure raw material and technology from their state-owned enterprises. 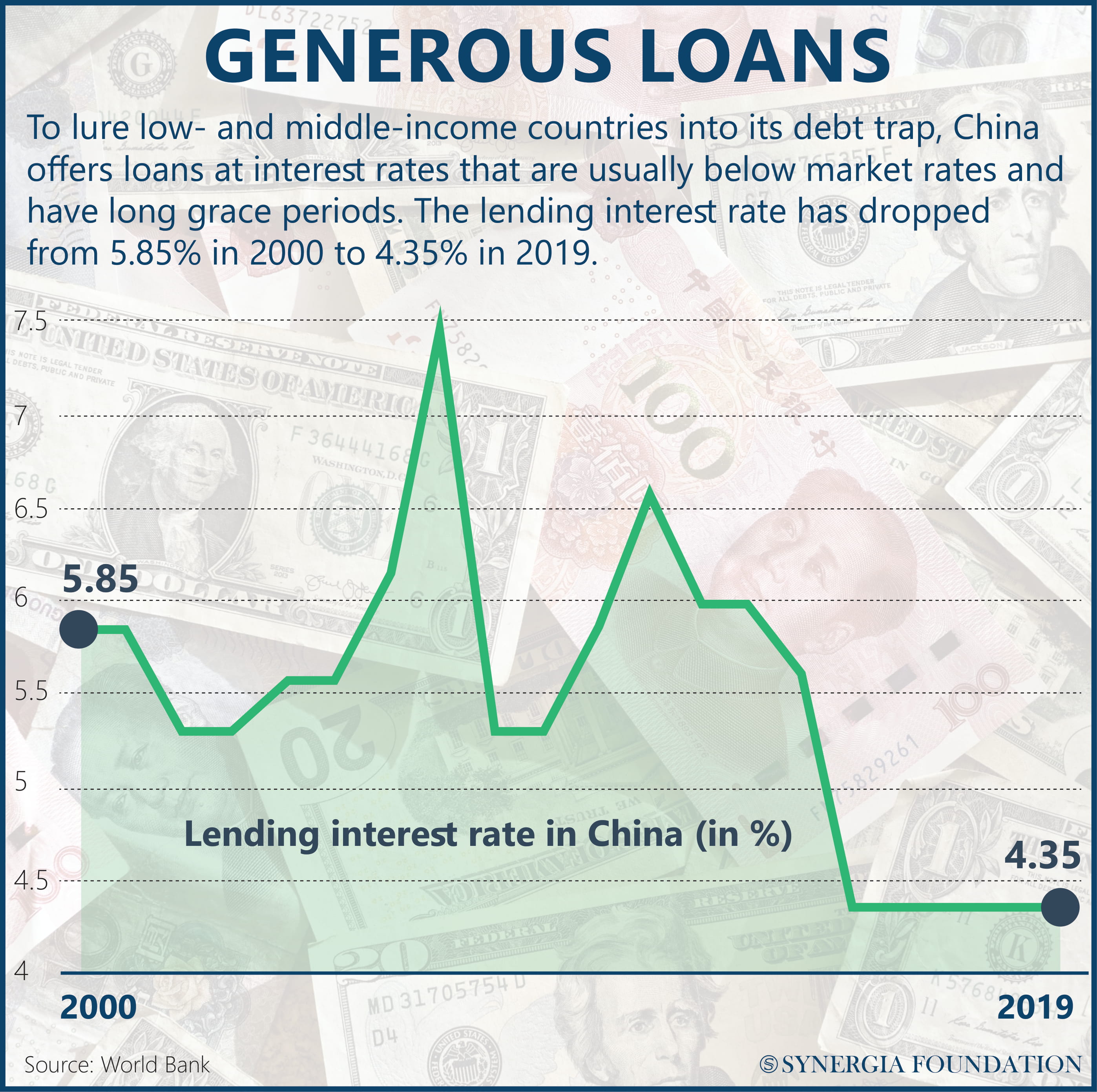 The U.S. ambassador to Sri Lanka and Maldives, Alaina B Teplitz, has cautioned the Sri Lankan government that the tax breaks offered for the Port City could be used for nefarious purposes such as money laundering. Earlier, the then U.S Secretary of State Michael Pompeo had also warned Colombo that “the Chinese Communist Party is a predator”, while“the United States comes in a different way — we come as a friend and a partner’’. The U.S. has always been a sustainable market for Sri Lanka. Many Sri Lankan youth migrate or study in the U.S. ensuring that there is a steady flow of funds, knowledge, and technology vis-à-vis Sri Lankan expatriates.

The U.S. has also been interested in promoting military cooperation with the country. In recent developments, the U.S. failed to renew the SOFA (Status of Armed Forces Agreement) as Sri Lanka sees it as a thinly veiled attempt to infringe upon its sovereignty. It has also fallen short of finalising the $480 million Millennium Challenge Compact (MCC) accord, which is an independent U.S. foreign aid. New Delhi has also in the past voiced its concern regarding Port City, considering it is just 3kms away from the ECT development Project at Colombo Port. The East Container Terminal Project, a 500-million-dollar project headed by India, Japan and Sri Lanka, was stalled due to growing labour union protests of foreign intervention in ‘national assets’ and was recently decided to be developed by Sri Lanka on its own with no Indian involvement.