The Age of Abundance– Part II

In Part 1 of this two-part series, the author gave a glimpse of the future, the Age of Abundance, when technology had overcome the need for mankind to work. If robotics and Artificial Intelligence (AI) can create value at little cost and there are no more conflicts for resources, we could indeed find ourselves in the Age of Abundance. However, the Age of Abundance will have to be preceded by the Age of Revolutions, where power equations between nations, lifestyles of human beings and socio-economic relationships, will undergo profound changes. In Part 2, the author describes the balance three of the eight techno-revolutions. He then proceeds to suggest that governments may do better if they work with citizens and collaborate with the new technology; rather than, promising hope for a return to the past.

After the 2ndWorld War and the creation of the United Nations, in 1945, the world has avoided ‘Total War’, as interpreted by the Prussian General Carl Von Clausewitz (1780-1831). There have, however, been several limited wars, which unlike ‘Total War’, does not seek to completely suppress the will of the enemy. The concept of four "generations" in the history of modern warfare was created by a team of United States analysts, including William S. Lind for the purpose of an argument for "the changing face of war" entering into a "fourth generation".

In 1989, a team of US analysts evolved the theoretical thesis called, ‘The Four Generations of Modern Warfare’. While the 1stGeneration involved the use of massed armies, the 2ndand 3rdgenerations respectively, brought lethal weaponry and mobility to the battlefield. 3rdGeneration Warfare (3GW) was demonstrated in the 2ndWorld War and the Indo-Pak War of 1971; while, 4thGeneration Warfare (4GW) emerged, only in the 1980s. Unlike 3GW, 4GW is de-centralized conflict between state and non-state actors; blurring the lines between politics & war and between combatants & civilians. The just concluded conflict in Iraq and the ongoing conflicts in Syria & Afghanistan, are examples of 4GW. In India, the conflict in J&K and the Maoist insurgency in Central India, can also be classified as 4GW. Some US analysts go further in claiming that Fifth Generation Warfare (5GW), once thought to be a generation too far in scope, has arrived and is irreversibly changing the dimensions of war. In its definition proffered by the US analysts, non-state warriors fight nation states out of sheer frustration without clear political objectives. It could be foreign sponsored by an ideological movement like Muslim Brotherhood or Al Qaeda or a state(s) with well-defined political objectives and the motive besides frustration could be self-generated or instigation like in the case of “Arab Spring” of 2011 or even a monetary incentive for the fighters.  5GW has three distinct characteristics: its potential to achieve supra-combinations, blur the boundaries that have traditionally restricted warfare within a specified military or political range and its ability to limit the role of modern combined arms mechanized force in future conflict. 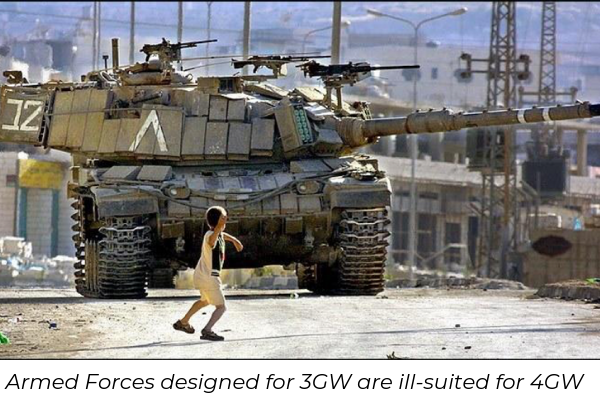 With nuclear armed nations, the possibility of Clausewitz’s ‘Total War’, further recedes; but the adaptation to 4GW, is getting more popular. Aircraft carriers like INS VIkramaditya, the deadly SU-30 multi-role fighter and Arjun the main battle tank, serve little purpose for asserting government control, either in J&K or in Chhattisgarh. Thus, Armed Forces designed for 3GW are ill-suited for 4GW, though they may have other purposes. The special advantage the non-state actor wields, is anonymity and security in the midst of local populations, where the might of the armed forces, is unemployable. For the state, the working and effective strategy for dealing with 4GW, is to personalize the conflict; by identifying the non-state actors and selectively eliminating them. Advances in forensic technology, real-time operational access to master databases, tracking of electronic foot prints and judicious use of UCAVs (un-manned Combat Aerial Vehicles) have empowered armed forces, to eliminate the non-state actor, with minimum collateral damage. When armed forces, across the world, complete the adaptation to the new strategy, 4GW with terrorism should perish. Thus, in the future, non-state actors, terrorists and even criminals, may have little chance in escaping the long-arm of governments.

The revolution in medicine has both a quality-dimension and a scale-dimension. In terms of quality, knowledge about medical conditions and their prevention or treatment or management, continues to make significant progress. However, the availability of affordable health-care, to the more than seven billion inhabitants of the planet, is the more serious challenge. As the medical industry continues to explore the digital-information revolution, innovations such as tele-medicine, virtual medical assistance and smart-wearable technologies, should create data-driven health care systems that could reach out to the multitudes. 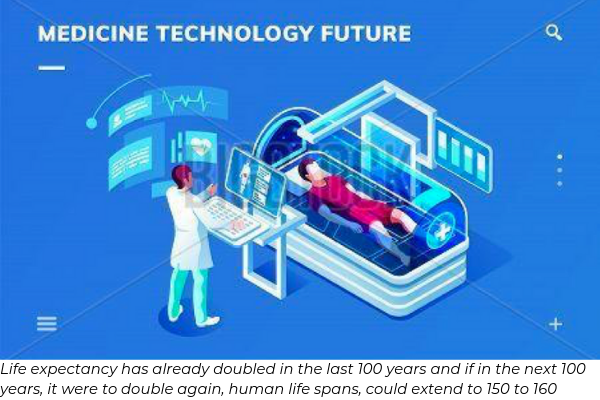 Today, affordable health-care is a key concern for societies; and, I feel confident that governments and the health care Industry, will be able to provide the same, in time. In the future, with better socio-economic circumstances, better quality of life and exceptional health-care services, life expectancy could double. Life expectancy has already doubled in the last 100 years and if in the next 100 years, it were to double again, human life spans, could extend to 150 to 160 years.

Elon Musk and Space X, have re-ignited human imagination, with the adventure of space travel. As a visionary should, he views space exploration, as an important step in preserving and expanding the consciousness of human life. Musk says that multiplanetary life may serve as a hedge against threats, to the survival of the human species. Space X, plans to colonize Mars and has set target, to establish the first Mars Colony with 80,000 inhabitants, by 2040. 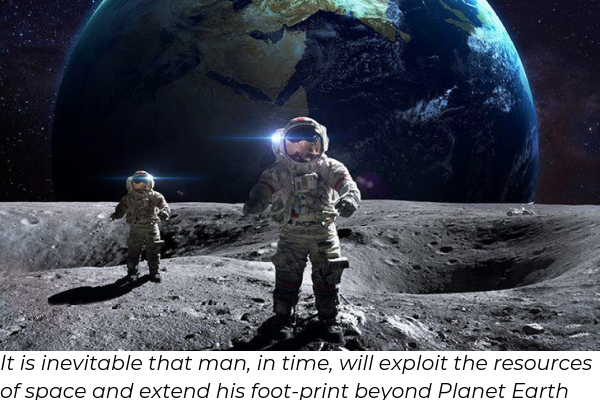 It is inevitable that man, in time, will exploit the resources of space and extend his footprint, beyond the confines of planet Earth.

Once the eight techno-revolutions play out, we would have reached the Age of Abundance. Robots and AI, will thereafter continuously generate wealth (wealth meaning the plentiful supply of valuable commodities and services), obviating the need for human beings to work. If we are truly able to control conflict in society and with no more necessity for man to work for a living, perhaps the future looks good? What would Man do with the time, resources (and technology), at his disposal? Perhaps, perusal of the Arts, attending cultural events, participation in sports activities and social recreation, could finally become the egalitarian pastimes, for the superior human species.

However, in the emerging decades, and until the techno-revolutions have run their course, I fear we will experience stormy transitions. The existing unequal distribution of wealth, coupled with mass-scale unemployment, may see vulnerable sections of society threatened for fundamental needs, such as food, clothing, shelter and public-health. If governments, are not forthcoming in providing for the needs of the growing population of citizens, society could witness increasing social disorder, breakdowns of governance, with associated mayhem and destruction. Some might point out that there have been other revolutions in the past; such as the Industrial, French and Russian revolutions. But unlike the past, this time, the world’s population is much larger and people have never before, been so educated and well informed. Governments would do well by planning for the Age of Revolutions and taking pro-active measures, to address the needs of citizens. 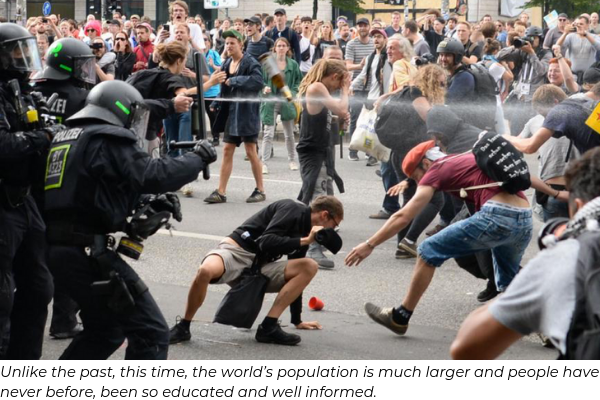 What Can Governments Do?

In metropolitan cities, we are already witnessing a quantum change in the availability of food. The mid-day meal in schools, Indira Canteens, in Bangalore and other forms of subsidized food, are increasingly available to citizens. However, according to FAO, almost 194 million people in India are still undernourished; mainly women and children. I also suspect this is more a rural than urban phenomena.

Governments should work towards making nutritious food, available to all citizens, as a fundamental right.

Armed forces provide uniforms to soldiers and many corporates also provide their employees with uniform allowances. When the costs of production fall, as expected, governments should also provide clothing to all citizens.

Similar to the Food Allowance, governments should work towards providing clothing allowance to all citizens, as a fundamental right.

Robots, when they arrive, will literally work 24x7, with no leave, no weekly offs and no complaints. Further, when robots begin to manufacture themselves (reproduce?), the cost of labor, will become, close to zero. Robots should be not only be able to create an abundance of accommodation but could also keep the apartments maintained, with house-keeping robots.

When the costs of labor decreases, as expected, governments should work towards providing serviced-accommodation to all citizens, as a fundamental right.

The revolution in autonomous driving with electric engines, is likely to manifest in Robot-taxi services. Some companies are also testing prototypes of flying cars, which when integrated with autonomous pilots, will reduce traffic congestion and dependence on roads. For longer distances, bullet trains with speeds up to 400 Kmph and the hyper loop, will reduce travel-time and costs.

When the costs of travel decreases, as expected, governments should work towards providing minimum travel allowances to all citizens, as a fundamental right.

The United Nations has repeatedly emphasized the need for universal health services, through various covenants such as the Declaration of Human Rights and the International Covenant on Economic Social and Cultural Rights. Our Supreme Court has also ruled that the right to live with human dignity, is enshrined in Article 21 of our Constitution. However, due to the sheer costs involved, universal health care has so far only been provided in some developed countries. With the anticipated benefits from the revolution in medicine, it should now become affordable to provide diagnostic treatments, free drugs and insurance cover for serious illnesses, to all citizens.

Governments should work towards universal medical care to all citizens, as a fundamental right.

It is also pertinent to note that many sociologists have pointed out the increasing gap between the ‘haves’ and ‘have nots’; and warned of adverse consequences, if it is not addressed, in a timely manner. The promises of technology, provide the opportunity to bridge that gap and I hope we grasp that opportunity, with both hands.

Can Mankind be Happy Without Work?

Amongst the many species in Mother Nature, it is only man, who gives so much importance to work. Carnivores hunt for food and plants perform photo-synthesis for nourishment; but work does not pervade their existence, the way it does for the modern human being. Since the Industrial Revolution of the 18thCentury, institutionalized work has become part of human lifestyle. When mankind begins to invest more time in leisure, perhaps we would be returning to the original design Mother Nature intended.

“Everyone has the right to a standard of living, adequate for the health and well-being of himself and of his family; including food, clothing, housing, medical care and necessary social services.”