Zuckerberg quizzed by US Senators

On Tuesday, Facebook CEO Mark Zuckerberg testified in front of a United States Senate Hearing. Zuckerberg was summoned to the hearing after the recent..

On Tuesday, Facebook CEO Mark Zuckerberg testified in front of a United States Senate Hearing. Zuckerberg was summoned to the hearing after the recent Cambridge Analytica data leak scandal, which raised numerous questions on data protection and privacy. Zuckerberg addressed issues from fake news, to foreign interference in elections, hate speech, and data privacy. He said that Facebook is in an “arms race” against Russian influence.

Mark Zuckerberg, born on May 14th, 1984, is best known as the co-founder and CEO of the billion dollar social media and networking site Facebook. Zuckerberg launched Facebook at the age of 19, when he was still at Harvard studying computer science. Facebook, initially “thefacebook.com”, was developed as an intra-university networking site in 2004. Zuckerberg dropped out shortly thereafter. The website saw some controversy as it gained popularity. Three Harvard alumni, Cameron and Tyler Winklevoss, and Divya Narendra, claimed that Zuckerberg had stolen the idea from them, and sued Zuckerberg for theft and fraud. The court ruled in favour of Zuckerberg and the parties agreed to settle.

Today, Zuckerberg is worth approximately $ 66 billion (April 2018), according to Forbes. He has been named one of Time’s top 10 most powerful people in the world. He owns 17% of the shares of Facebook, one of the largest social media corporations in the world. Facebook had approximately 2 billion monthly users in 2017, and over 14 billion registered users.

Earlier this month, Facebook was caught in scandal due to a data breach by the private political consultancy Cambridge Analytica. Cambridge Analytica uses data mining and data analysis “to change audience behaviour”. In March, it was revealed that the company had received personal information from up to 87 million users across the world, through a third party app. Cambridge Analytica has reportedly been involved in hundreds of political campaigns across the world, including in the Philippines, Nigeria, Kenya, the Czech Republic, Argentina, UK, and the US.

According to media reports, Facebook had known about the data breach since 2015, however it failed to take effective action or inform users. The Federal Trade Commission is currently undertaking a probe to find out whether the corporation failed to protect customer privacy based on an agreement signed in 2011.

Since the beginning of 2018, Facebook has been making significant changes to its platform. The company has been criticised for its failure to address hate speech and terrorist propaganda, the presence of bots, and the proliferation of “fake news”. Facebook is thought to have been a key influencer in the 2016 US Presidential election and the Brexit vote. Zuckerberg has admitted that the website was making too many errors enforcing policies and preventing misuse of its tools. He has made promises to address local concerns such as accusations by Myanmar rights groups that Facebook is too slow to address hate speech that propagates violence. Zuckerberg has agreed “in spirit” to adhere to strict privacy rules enforced by the European Union. 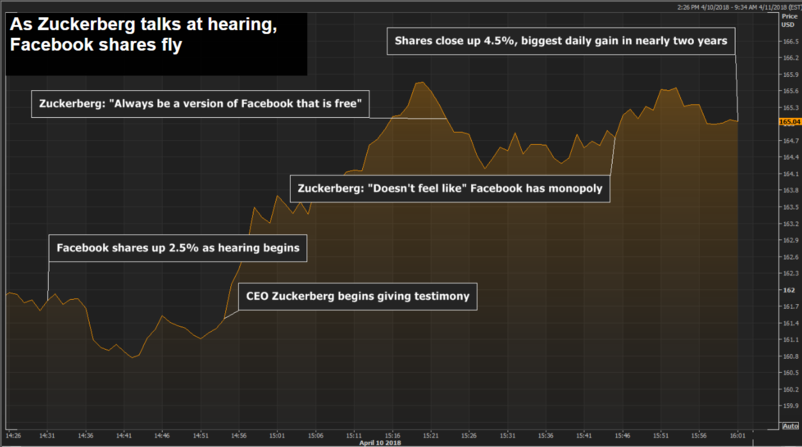 “We didn't take a broad enough view of our responsibility, and that was a big mistake,” Facebook CEO Mark Zuckerberg said at a hearing on Capitol Hill on Tuesday. “And it was my mistake. And I'm sorry. I started Facebook, I run it, and I'm responsible for what happens here.”

Zuckerberg, who was summoned by US lawmakers after the Cambridge Analytica scandal, testified in front of 44 Democratic and Republican Senators. He admitted that Facebook “didn’t do enough” to prevent its platform from being used by malicious forces. “Across the board, we have a responsibility to not just build tools, but to make sure that they're used for good,” he said.

Zuckerberg stated that Facebook’s slow response to alleged Russian interference in 2016 polls was one of his “greatest regrets in running the company”. Citing the battle against bots and other means of digital influence, Zuckerberg said, "This is an arms race… There are people in Russia whose job it is to try to exploit our systems… We need to invest in getting better at this too." He admitted that his staff had been questioned by Muller’s special counsel on Russian interference, adding that he himself had not been interviewed.

Zuckerberg said that the company is conducting an audit on the Cambridge Analytica breach, and investigating other apps that have access to large amounts of information. He claimed that the website’s policies have been updated since the breach, which would prevent “this specific situation with Cambridge Analytica from occurring again today.”

Zuckerberg avoided questioning on Facebook’s business model, which relies on advertising for revenue, stating that the idea that Facebook sells data to advertisers is a “misconception”. He said that Facebook only does advertisement “placement”. Zuckerberg said he did not believe regulation is “bad”. “I think the real question, as the internet becomes more important in people’s lives, is what is the right regulation, not whether there should be or not,” he said. It has been noted that during the hearing, Zuckerberg did not make any promises to change the company’s business model, or implement new regulations.

Members of the media noted that the legislators were limited by the 5 minute questioning time, and an incomplete understanding of Facebook’s existing policies. Analysts pointed out that Zuckerberg avoided elaborating on issues such as the continued opacity of privacy settings, the ethics of Facebook’s business model, and features such as third party access and location information. Observers noted that Republican Senators appeared less keen on imposing regulatory legislation. Several warned that regulation could act as barriers to entry for start-ups; Zuckerberg agreed.

Others, such as Senator Richard Blumenthal, told Zuckerberg, “Your business model is to monetise user information… Unless there are specific rules and regulations enforced by an outside agency, I have no assurance that these kinds of vague commitments are going to produce action.” Senator Kamala Harris took to twitter to express disappointment at Zuckerberg’s “failure to answer several critical questions”, leading to questions about “how much Facebook values trust and transparency”.

Facebook shares closed 4.5% up as a result of the hearing.

Our assessment is that Zuckerberg acknowledged the company’s mistakes by addressing issues surrounding data privacy. He played up the company’s image as a well-meaning entity, and emphasised its efforts at combating Russian influence. However, he was non-committal on the possibility of imposing regulations, and circumvented several tough questions. While markets responded positively to the testimony, we believe that Zuckerberg and Facebook may have to do more to regain the trust of governments and users across the world. Regulation may become an inevitability.