The new United Nations High Commissioner for Human Rights, Michelle Bachelet has expressed her deep concerns about the worsening situation in the English speaking region of Cameroon. The Republic of Cameroon shares its borders with Nigeria to the west and north, Chad to the northeast and Gabon...

The new United Nations High Commissioner for Human Rights, Michelle Bachelet has expressed her deep concerns about the worsening situation in the English speaking region of Cameroon.

The Republic of Cameroon shares its borders with Nigeria to the west and north, Chad to the northeast and Gabon, Congo to the south. The territory of present-day Cameroon was first settled during the Neolithic era. Due to its cultural and geological diversity, Cameroon is often referred to as “Africa in miniature.”

Initially, the majority of the territory in the Cameroon region were either divided as French Cameroon and the British Cameroons. The British Cameroons was split into northern and southern administrative units. In 1960, Francophone Cameroon and Nigeria became independent and prompting the UN to organize a plebiscite allowing Anglophone Cameroonians to decide whether to integrate with Nigeria or Cameroon. While Northern Cameroons joined Nigeria, Southern Cameroons opted for reunification with Cameroon.

Ahmadou Ahidjo was the first president of Cameroon. The political climate at that time was marked by the smouldering civil war against the radical party, UPC. However, the war was won brutally by the government. The state of emergency during the war helped President Ahidjo establish a repressive dictatorship. He ruled the country for 22 years and handed over the presidency in 1982 to Paul Biya. The stability in power transition was short-lived, the struggle between Biya and Ahidjo lasted for two years and concluded with Biya emerging as the undisputed leader. 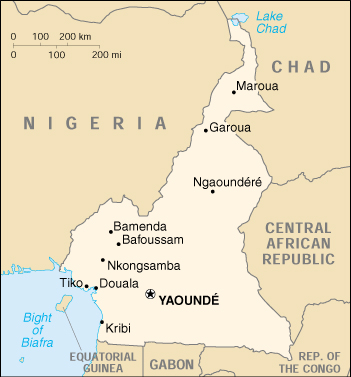 Chile’s former President Michelle Bachelet, the new United Nations High Commissioner for Human Rights on Monday voiced her worry over the current crisis in the nation. She highlighted that the country needs urgent attention even though Yaounde had failed to take initiative and ensure that a resolution for the crisis is achieved.

In the 39th session of the Human Rights Council held in Geneva, Switzerland on Monday, Ms. Bachelet in her opening statement highlighted that the situation in Cameroon has worsened in the recent months. She said due to the rise in conflict in the Anglophone regions between the security forces and armed groups, “a large number of civilian victims and over 180,000 people forced to take refuge far from their homes.” She also expressed that, there is now a pressing need for humanitarian assistance in the country.

The crisis erupted in Cameroon last year due to the imposition of the French language in English courts and schools. Roughly 20% of the country’s population of 24.6 million people are Anglophone and the majority are Francophone. The crux of the whole protests is the forced adaptation or assimilation into the dominant Francophone society.

Though a power-sharing agreement was achieved in 1961, where the executive branch of government will be shared by Francophones and Anglophone, it hasn’t been upheld efficiently with a steady representation from Anglophone.

When the crisis broke out last year with lawyers and teachers protesting, President Paul Biya responded by deploying troops to the region of protests and blocking internet access. The protests escalated into a national political crisis when it met with violent repression. The government opened fire at the protestors, looted and burned down their villages. John Mukum Mbaku, a professor at Weber State University in Utah and a non-resident fellow at the Brookings Institution said that “The government is shooting down defenseless villagers, and many have decided to defend themselves and are fighting back.” He also expressed that, “If you look at what is going on now, you can call it a civil war.”

A recent count by the International Crisis Group reveals that at least 120 civilians and 43 members of security forces have been killed since the birth of the conflict. More than 20,000 people have fled to Nigeria as refugees, and 160,000 are now displaced within Cameroon, according to the U.N. Office for the Coordination of Humanitarian Affairs.

The first President of the Cameroon Bar Association denounced the government’s actions as unconstitutional and called for an independent Anglophone entity known as the ‘Republic of Ambazonia’ in 1985. However, President Biya has repressed the minority’s identity and their request for an independent state.

In October 2017, the separatist leader Julius Ayuk Tabe declared the Republic of Ambazonia independent and the interim government’s spokesman, Nso Foncha Nkem, invited Francophones to leave the region and called on Anglophones to return to Ambazonia and support the movement. However, the response towards this moment has been very resistant due to the diverse opinions within the Anglophone population.

Our assessment is that the present crisis in Cameroon indeed needs humanitarian assistance. Many human rights activists worry that Cameroon could be the epicentre of the next African civil war. We believe that the present crisis is not only influenced by linguistic conflicts but also by the timing being the run-up to the presidential elections in October 2018. We feel that the Human Rights Commissioner’s words of caution should motivate the government to address key grievances and foster a peaceful resolution of this crisis.