India’s telecom regulatory body TRAI, has now published a fresh set of recommendations that strongly backing net neutrality. With these new regulations, India could quite possibly introduce the world's most progressive policy on equal internet access for all.

Net neutrality is a term was coined by Columbia University media law professor Tim Wu in 2003. It is the principle that Internet service providers must treat all data on the Internet the same, and not discriminate or charge differently by user, content, website, platform, application, type of attached equipment, or method of communication. If there is no net neutrality, then providers can choose to make certain sites and content faster to load than others. It can charge money to access specific websites. It will have unlimited control over the content viewed, and perused by millions across the world on the internet.

Nations across the world are currently debating the merits and demerits of net neutrality. In 2016, the subject became one of the main issues in India. Facebook offered a new product called Free Basics, that would have given users access to a small selection of data-light websites and services. This resulted in widespread protests by people across the country. India’s net neutrality movement against Facebook’s policy of controlling free access to a selected number of web services through its “Free Basics” service. The project ultimately was pulled off from the country from the nation’s telecom regulator ruled on behalf of net neutrality. Telecom operator Airtel was forced to withdraw a plan to charge extra for internet calls, and shut down a platform called Airtel Zero.

The Telecom Regulatory Authority of India (TRAI) is the regulator of the telecommunications sector in India. Established in 1997, its mission is to create and nurture conditions for growth of telecommunications in India to enable the country to have a leading role in the emerging global information society. In March 2015, TRAI first attempted to define net neutrality through a consultation paper on regulatory framework for OTT services. 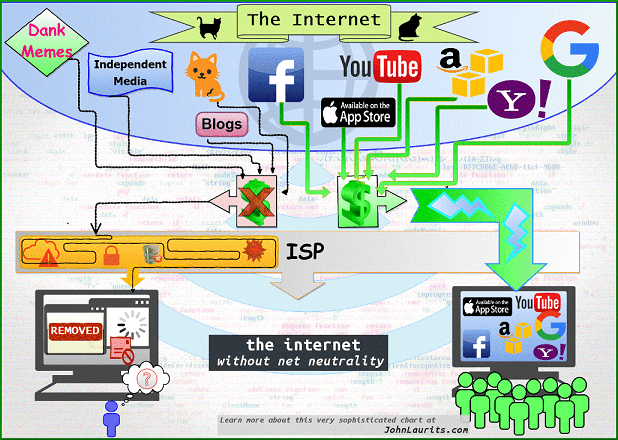 TRAI, has now published a fresh set of recommendations that strongly backing net neutrality. With these new regulations, India could quite possibly introduce the world's most progressive policy on equal internet access for all.

The body has stated that Internet Service Providers should be allowed to practice or deploy any discriminatory practices. This includes as blocking, degrading or slowing down of certain web traffic. The body had ruled strongly in favor of free and fair internet. This way, the traffic cannot be forced towards a particular website, or platform. When users pay an ISP for an internet plan, they are entitled to be able to access all online content. Given the overwhelming public support for net neutrality, the government is expected to accept the recommendations.

The guidelines cover Internet of Things (IoT) but leave out two contentious topics. One of them is the over-the-top (OTT) services - apps like Skype or WhatsApp that ride on top of telecom operators' networks. This could eat into the operators' revenue, such as when users make free Skype calls instead of paying the operator for a long-distance call. The other issue that has been left out is regarding content delivery network.

This is in sharp contrast to what’s happening in the United States. The current White House administration is trying to initiate a roll back of the net neutrality rules enshrined in law under President Barack Obama. In 2016, the European Union also published a set of guidelines that fell in favor of net neutrality. However, there hasn’t been such widespread activism in Europe.

Amba Kak, a technology policy fellow at Mozilla, said, “Since TRAI has specifically described the exact changes DoT needs to make in their licence terms for telecom providers, I don’t foresee much lag in getting these recommendations passed.”

Our assessment is that with these new regulations, India could adopt the most progressive policy regarding net neutrality. However, these regulations leave out two contentious issues – OTT services and content delivery networks.